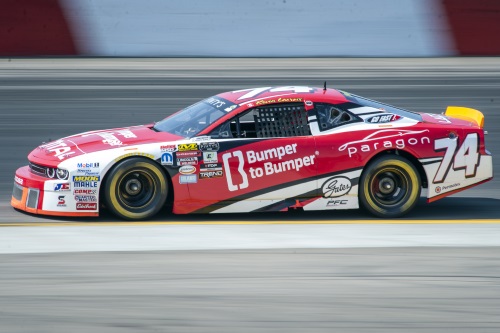 Antigonish (NS), August 21, 2018 – Kevin Lacroix finished 8th during the Bumper to Bumper 300 at the Riverside Speedway in Nova-Scotia last Sunday during the NASCAR Pinty’s series event. It was a bittersweet result for the Saint-Eustache native as he led this event for 90 laps.

The Bumper to Bumper team was heading to Nova Scotia this past weekend for a 300-lap event presented by Lacroix’s primary partner. Friday night, Bumper to Bumper fans and customers were invited to a friendly BBQ at the Antigonish store. Around a hundred people joined the NASCAR Pinty’s team to celebrate before the event.

The race was supposed to take place on Saturday, but in true Antigonish fashion, it was delayed to Sunday because of the rain. Since the qualifying session was canceled, the starting grid was determined by the championship standings positions. Thus, Kevin started the race from the 8th place.

Quickly making his way in the leader’s pack, Kevin stayed 2nd behind L.-P. Dumoulin for the first 75 laps. After a first mandatory stop, Lacroix came down pit road for a fresh set of tires; then he came back on the track in 5th place. After the restart, the #74 Bumper to Bumper/ Total, Gates/ Go Fast/ PFC Brakes car took the lead of the race.

Gaining momentum, Kevin managed to catch up with most of the field, lapping a few cars. As he was approaching the Top 5, a caution flag came out, putting an end to his domination. During the second mandatory stop, the team pitted again to put the set of tires used for the first 75 laps. It didn’t help the driver who had issues with his tires for the remainder of the race. It is in 8th position that he finished this race that he otherwise could have won.

“Our pit strategy was not good,” said Kevin. “We shouldn’t have stopped in the pits during the first caution flag. We should have stayed on the first set of tires. I don’t know what happened with those tires which were perfect at the beginning of the race, but so difficult to handle towards the end. I think it might have been a pressure issue…”

Nonetheless, Bumper to Bumper was well represented at the Riverside Speedway this Sunday as hundreds of fans wore the team’s jersey. Kevin wants to thank his sponsors Bumper to Bumper, Total, Go Fast, PFC Brakes and Gates Corporation, a partnership between growing companies that represent excellence, ambition and victory. 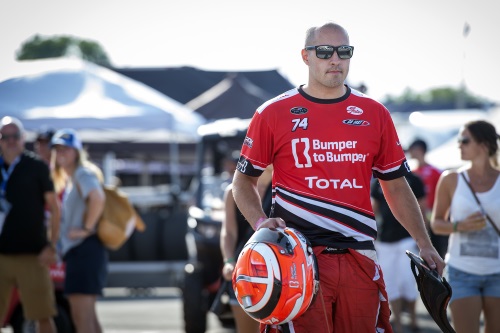