Ponte Vedra, FL (August 23, 2018) E3, manufacturer of E3 DiamondFIRE spark plugs and performance products, is a sponsor this year of a beautiful 1940 Dodge truck custom built by Cool Hand Customs of Middleton, WI. The truck will be the centerpiece attraction at E3’s booth for the 2018 SEMA Show, booth #71000, and will be entered into SEMA’s Battle of the Builders.

The highly modified Dodge truck built by Amy and EJ Fitzgerald, owners of Cool Hand Customs, will feature three E3 high-performance ignition products: E3 Billet Distributor, Race Spark Plugs and Race Wires. The truck will be equipped with a 440 big block and a 1970s style, torsion bar Dodge Challenger suspension. The truck’s paint scheme will be an exterior satin white with green and black accents with the frame painted silver and the short block painted in E3’s distinctive green logo color. The ’40 440 truck will make its first public appearance at SEMA.

E3 Vice President of Motorsports, Rob Fisher, says, “The concept for the truck began to take shape when Amy acquired the truck a few years ago and a friend said he had an RV with a 440 Big Block that could be hers as long as she took the RV too. That’s how the ’40 440 project was born.” 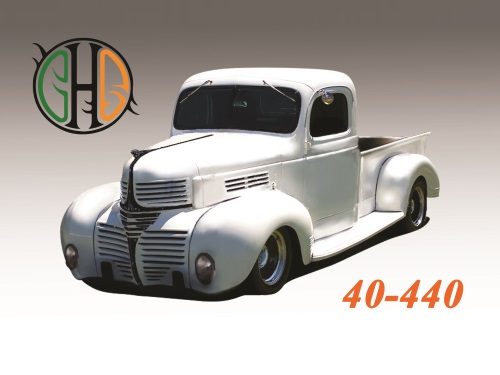 Fitzgerald says, “The suspension plan came from EJ’s desire to do something new and different. The torsion bar suspension was something used in the 1970’s on Mopars. It naturally “fit” with the 440 motor and the Dodge truck body. EJ spoke with Bill Foley at QA1 and they had the perfect parts to make it work. We only build one shop vehicle per year with the help of many sponsors. We are so excited that E3 came on board early for this project and has been one of our most enthusiastic supporters. We build three to five vehicles a year for customers, as well as our one yearly “show” build for the shop. Fitting the SEMA build in is always challenging, but so worth it to get the opportunity to work with so many outstanding manufacturers and have the honor to display our hard work at SEMA.”

Fisher added, “We’re very excited to have this truck in our booth this year. Every year, a Cool Hand Customs build gets closer to the final ten in the Battle of the Builders. I have a feeling this will be their lucky year.”

About E3
E3 Spark Plugs with patented DiamondFIRE technology, developed and validated by researchers from leading engineering universities, improves combustion efficiency for maximum performance. As one of the leading spark plug companies in the United States, E3 manufactures a complete line of spark plugs for automotive, small engine, powersports and racing application. In 2016, E3 expanded the company’s product line to include distributors, spark plug wires, coils and 02 sensors under the company’s DiamondFIRE brand. The DiamondFIRE line of ignition products firmly entrenches E3’s commitment to the automotive high performance and racing industry. For more information about E3 ignition products, visit e3sparkplugs.com, or follow E3 on Facebook.