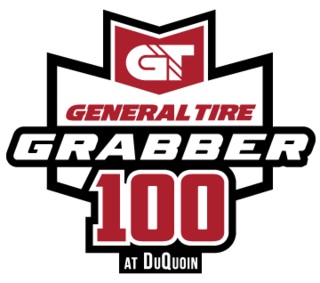 Toledo, Ohio (August 29, 2018) – As it has every year since 1983, the ARCA Racing Series presented by Menards will make its annual appearance at the DuQuoin State Fair in DuQuoin, Illinois. And as is tradition, the General Tire Grabber 100 will close the Southern Illinois State Fair on Labor Day, September 3, the only major stock car event scheduled for the Monday of Labor Day weekend.

The DuQuoin State Fair started in 1923 as an alternative for the poor local farmers who could not afford the trip to the state capital in Springfield. The fair has always celebrated the region’s agricultural heritage, with the added flair of country music as some of the biggest names in the entertainment industry have performed at the fair over the years. But as fair exhibitors and vendors start to wind down a busy week, attention turns towards the one-mile dirt track on the property.

The Magic Mile at the DuQuoin State Fair dates back to 1946. Built on reclaimed stripmine land by W.R. Hayes, the founder of the Southern Illinois State Fair, the dirt mile has hosted major motorsports and horse racing events. The facility hosted the AAA Champ Cars starting in 1948, and was also the long-time home to America’s premier harness racing event, the Hambletonian, for 24 years.

Fair Grove, Missouri’s Dean Roper won the first ARCA-sanctioned event at DuQuoin in 1983, an event co-sanctioned with the United States Auto Club. Twenty-nine cars started that race, and the field included future and past ARCA champions Bob Dotter, who finished fifth, Bill Venturini, who finished eighth, Marvin Smith, who finished ninth, Bob Brevak, who finished 18th, and Lee Raymond, who finished 27th. Bobby Jacks started from the pole with a 36.597 second/98.423 mile per hour lap in an Oldsmobile; he finished 15th after crashing out on lap 66.

Nineteen drivers have scored ARCA wins on DuQuoin’s dirt over the previous 34 years. Having previous dirt experience has often been an advantage, but there have been notable exceptions to the rule. Dirt veterans Roper, Billy Thomas, Bob Hill, and Jeff Finley combined to win every race from 1993 through 2000, and each had considerable dirt experience on their resume. But when Parker Kligerman won in 2009, and when Austin Theriault won in 2017, they both only had one career race on dirt coming in. Kligerman won his dirt debut at Springfield two weeks earlier, while Theriault finished second at Springfield.

Christian Eckes (No. 15 JBL Audio Toyota) will look to perpetuate that streak for the “youth and enthusiasm” brigade as he goes for his second consecutive dirt win. Seventeen-year old Eckes, from Middletown, New York, won at Springfield two weeks ago to earn his first dirt victory in just his second career race on dirt. The Venturini Motorsports driver will be making his first start at DuQuoin.

While Eckes represents the sport’s youth movement, Joe Cooksey (No. 3 Hot2Go Pizza & Subs Ford) represents the other half of the “old age and treachery” parable. From nearby Centralia, Illinois, the 52-year-old Cooksey has 143 career ARCA starts dating back to 1996. He has 13 career top-ten finishes at DuQuoin, behind only Frank Kimmel and Ken Schrader on the all-time list. Cooksey has also earned one career General Tire Pole Award at DuQuoin, in 2000. His best finish at DuQuoin is third, in 2003 and 2006. He finished eleventh at Springfield in just his second start of the 2018 season. Cooksey was running as high as fifth in last year’s race before an engine issue on the final restart slowed his progress resulting in a ninth-place finish.

“Out of all the tracks we’ve been to in the last 22 years of ARCA racing, the Magic Mile has been by far the track that had meant the most to my career,” Cooksey said. “Maybe because of all the times I’ve watched my heroes race there. Maybe because it’s so close to home, for what ever reason I feel confident when I pull off pit road.

“I still feel like in the right equipment and situation I could win there. We’ve had some good cars over the years but never enough to get a win. Like my buddy Schrader would say we won third a couple times. The last two years of my little comeback have been a challenge, Wayne Hixson has given me the chance to race and we’re doing the best we can. Right now a top 10 is what we’re hoping for, and we’ve done that the last couple times. As always I’m excited and can’t wait strap in one last time.”

The ARCA Racing Series presented by Menards General Tire Grabber 100 is slated for Monday, September 3 at the DuQuoin State Fair. Practice is scheduled from 9:45 to 10:45 am CT, General Tire Pole Qualifying is planned for 11:30 am CT, and the race will go green at 2 pm CT. The race will be televised live on MAVTV; ARCARacing.com will have live timing, scoring, track updates, and scanner audio throughout all on-track sessions for registered users.