INDIANAPOLIS – Steve Johnson has tasted victory twice at the prestigious Chevrolet Performance U.S. Nationals, providing a pair of incredible moments in the veteran’s Pro Stock Motorcycle career. Needing a great result at this weekend’s race at Lucas Oil Raceway at Indianapolis to advance to the NHRA Mello Yello Countdown the Championship, Johnson’s sole focus is simply trying to gain a third win, knowing full well that would more than take care of his playoff aspirations.

Johnson is currently 12th in points, 19 behind 10th-place Hector Arana, so the rider of the Steve Johnson Racing Suzuki knows he has work to do on drag racing’s biggest stage. But Johnson, who posted Indy wins in 2008 and 2005, isn’t counting points at the moment. Instead, his priority is figuring out the best chance to win the world’s biggest drag race. 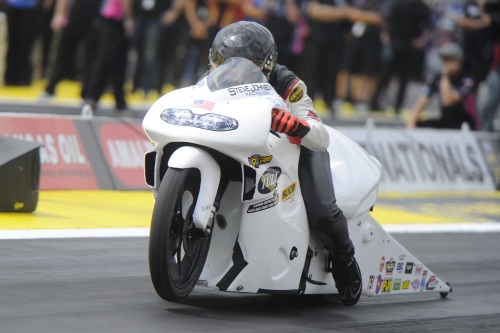 “The testing and preparation we’ve done is all about winning the race and that race happens to be the U.S. Nationals,” Johnson said. “Our focus isn’t on the Countdown. Our focus is on winning the race. It’s the U.S. Nationals, the biggest race we go to. What ties it together is it seems like we’re always in this position. That’s a result of my own actions so I’m working on finding a solution.”

Steve Torrence (Top Fuel), J.R. Todd (Funny Car), Skillman (Pro Stock), and Eddie Krawiec (Pro Stock Motorcycle) were last year’s winners of a race that will be broadcasted on the FOX national broadcast network and Fox Sports 1 (FS1), including a live broadcast of Monday’s finals on both FOX and FS1 on Monday, Sept. 3. It is the 10th of 16 Pro Stock Motorcycle races during the 2018 NHRA Mello Yello Drag Series season and Johnson isn’t the only one who has a lot riding on Indy.

Four playoff spots are on the line in the class at the Big Go, with Jimmy Underdahl just 10 points back of Arana. Joey Gladstone (36 points behind Arana) and Ryan Oehler (53 points back of Arana) are also within range of playoff spots, while Scotty Pollacheck, Angie Smith and Angelle Sampey, who is just 19 points ahead of Arana, will look to secure their spots in Indy. Underdahl knows what is on the line, but he warns that changing his approach would be detrimental.

“If you change your routine, that’s where you start to lose it and start making mistakes,” Underdahl said. “If you do that, you lose your focus. We’ll make sure we’ve got everything ready to go and everything that’s on the line gives you that motivation to try to do better. I think it’s going to take going to the semis to get into the Countdown. We’re all gunning for it and it’s going to be a battle.”

The points-and-a-half system being in play (150 points to the winner) for the Chevrolet Performance U.S. Nationals also throws another variable into the mix this weekend, as does competing against a loaded class that includes defending winner and reigning world champ Krawiec, points leader Andrew Hines, LE Tonglet, Jerry Savoie, Matt Smith and Hector Arana Jr. Johnson realizes that, but it doesn’t change his approach heading into the weekend.

“As a racer, you always envision winning,” Johnson said. “I spend more time on my winner’s circle kit than most people spend preparing their Thanksgiving dinner. I not only concentrate on details for the mechanical side, but I also work on the details for the mental side. There’s very stout competition, but I feel like and I can visualize doing really well at this race.”

In Top Fuel, Steve Torrence is after a second straight Indy win to maintain the points lead against the likes of defending world champ Brittany Force and 10-time Indy winner Tony Schumacher.

Drew Skillman would like his first Pro Stock win of 2018 to happen at Indy against the likes of points leader Greg Anderson, four-time 2018 winner Tanner Gray and Erica Enders.

Those in attendance will also have the once-in-a-lifetime opportunity to interact with a few of the most renowned names in drag racing during the NHRA Legends Tour. This will feature meet-and-greets, autograph sessions, and a variety of other activities. A star-studded lineup of legends is scheduled to attend the Chevrolet Performance U.S. Nationals, including Don Prudhomme, Don Garlits, Shirley Muldowney, Al Segrini, Tom Prock, Darrell Gwynn and Terry Vance.

As always, fans will have the opportunity to interact with their favorite drivers as they’re granted an exclusive pit pass to the most powerful and sensory-filled motorsports attraction on the planet. This unique opportunity in motorsports gives fans direct access to the teams, allowing them to see firsthand the highly-skilled mechanics service their hot rods between rounds, and get autographs from their favorite NHRA drivers. Fans also will want to visit NHRA’s popular Nitro Alley and Manufacturers Midway, where sponsors and race vendors create a carnival atmosphere, with interactive displays, simulated competitions, merchandise, food and fun for the entire family.

A special Monday edition of the SealMaster NHRA Track Walk also will take place prior to final eliminations, where many of the sport’s most celebrated drivers will walk alongside fans down the historic dragstrip. Fan-favorite vintage racecars will be on display in the Hot Rod Junction, along with several autograph sessions featuring the biggest stars of the sport will be featured.

FOX national broadcast and FS1 will televise coverage of the Chevrolet Performance U.S. Nationals, starting with qualifying on Sunday, Sept. 2 on FS1 at 4 p.m. and 10 p.m. EST. The broadcasts continue on FS1 with two hours of live coverage of eliminations on Monday, Sept. 3 starting at 11 a.m. EST, continuing live on FOX at 1 p.m. EST.

WHAT TO WATCH: Tony Schumacher is seeking a record 11th Top Fuel victory at the Chevrolet Performance U.S. Nationals… Four-time Pro Stock world champion Greg Anderson is seeking his seventh Chevrolet Performance U.S. Nationals victory… Several high-profile drivers are looking for their first victory in the world’s most prestigious drag race, including two-time Indy runner-up Doug Kalitta in Top Fuel, Ron Capps in Funny Car… Drivers in several Mello Yello Series categories who are on the bubble to make it into the top 10 in points will be trying to take advantage of Indy’s point-and-a-half system and secure their berths into the Countdown to the Championship, NHRA’s six-race postseason playoffs. 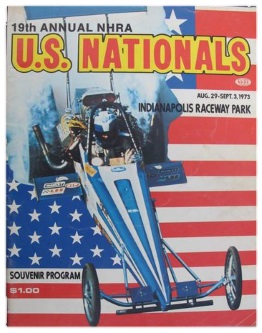