DU QUOIN, Ill (September 3, 2018) — Nolen Racing’s two USAC Silver Crown cars led the first six laps and the last six laps of Sunday night’s Ted Horn 100 USAC Silver Crown race at the Du Quoin State Fairgrounds, including the only lap that paid. The Whiteland, Ind.-based team’s No. 17 driven by Chris Windom led lap 100 for both he and the team’s second consecutive victory and the $10,000 top prize.

It was the third USAC Silver Crown victory at Du Quoin for team owner Gene Nolen of Greenwood, Ind., as he also won this race with Johnny Parsons in 1992 and the late Tony Elliott in 1999. It was Windom’s second Du Quoin victory, as he won here in 2016 driving for another team. 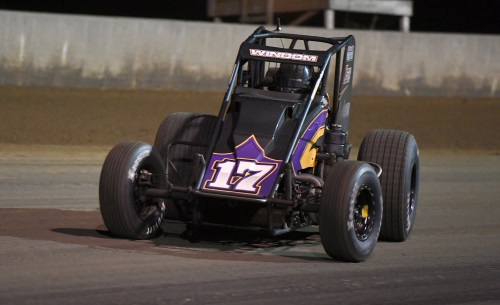 Windom ran in third place for most of the race, and was so far back at times he could hardly see the top two cars. Sticking to the internal clock in his head concerning a smart pace rather than giving in to the tantalizing desire to run with the leaders, he saved both his car’s Hoosier tires and fuel instead of trying to get to the front when it didn’t count. He adapted to the track conditions and rolled along with the nature of the race, which surprisingly had no yellows but did have two red-flag periods. They made the race flow in three stages from laps one through 15, laps 16 through 34, and then end with a torrid test of endurance from laps 35 through 100. All four of the other leaders, including Windom’s teammate, Jerry Coons Jr., either had mechanical issues or ran out of fuel at the end. And, like a poker player from the Wild West, Windom was able to step in, get the lead for the first time on lap 95, and go on to steal their glory in the wild finish.

The lack of yellow flags was unusual, as this race has averaged three cautions and one red flag per event since 1970.

“It was a very strategic race we had to run,” Windom said on Monday of the eighth USAC Silver Crown victory of his career. “It’s never easy holding back and letting the leaders get that far ahead of you. I knew we were in good shape with the pace we were running, and everything worked out perfect in the end for us.”

Both Windom and Coons drove Maxim chassis with Tranter-prepared Chevrolet engines, and both of their cars are sponsored in part by KECO Coatings and Indy Race Parts.

Windom, of St. Louis, started eighth in the 30-car field but he passed polesitter Jacob Wilson, Kevin Thomas Jr., David Byrne and Kyle Robbins on the first lap to rise to fourth. Tyler Courtney got around him on lap six to push him back to fifth, but he regained fourth after a red for J.C. Bland, who had flipped at the end of the backstretch with 15 laps down after his car’s rear axle broke. Bland got out of his car under his own power. Windom got fourth at the expense of his teammate, because Coons, who was third at the time, had to head to the work area as the cars were regrouping for the restart after the red flag. The Nolen crew quickly addressed a problem with Coons’ car’s air bleeder and changed its left-rear tire, which had gone flat under the red-flag conditions. Coons was able to restart, albeit back in 22nd position instead of third, where he had been running when the red was displayed.

Windom ran in fourth place through another red after Austin Mundie flipped in Turn 1 with 34 laps down, also escaping serious injury, and he gained one more position to rise to third when the car of Brady Bacon, which led from laps seven through 34, wouldn’t refire after that red. Bacon ended up 21st.

Point leader Kody Swanson got ahead of Windom for one lap, lap 36, but Windom passed him back on the following lap to regain third. He was still third behind leader C.J. Leary and Courtney at the halfway point, but he was 7.349 seconds behind Courtney and 3.075 seconds ahead of the fourth-place driver, Swanson, at the time.

Courtney passed Leary for the lead on lap 88, but Windom was still 13.51 seconds behind Leary after that exchange. But both Courtney and Leary were running out of fuel, which became obvious when Leary faded to fourth on lap 94, which advanced Windom to second. Courtney suffered the same problem on the following lap, and Windom took the lead for the first time on lap 95 and then held on for the victory. He had a 5.242 seconds margin of victory over Thomas at the checkered. Shane Cockrum finished third, Justin Grant was fourth and Swanson finished fifth. Leary sputtered home seventh and Courtney ended up 14th in the final rundown.

“I think we saved just the right amount of fuel,” Windom said in victory lane in what might have been the understatement of the season. “These Nolen guys gave me a bad-ass race car. We have a fast race car, and we’re showing it now. I want to thank Gene Nolen and all the guys who work on this car.”

Regarding his pace, after the race Windom told a USAC official “It’s really hard in that situation. I didn’t know when to pick it up, because we never got a caution. There really wasn’t a right time to. I don’t feel like I’ve really learned that until this year. You really have to pace yourself. It may not always work out, but nine times out of 10, it’s going to work out because the pace those guys tried setting there, I didn’t think was sustainable for 100 laps.

“I thought we’d get a caution with 20 or 30 to go, and then I’d be able to race them for the lead,” he continued. “It never came, so then I started thinking with 20 to go that with the pace they were setting, there was no way they were going to last. I got a little more nervous when there was 13 to go and they were still 13 seconds ahead of me. Finally my spotter came over the radio and said the No. 10 and then the 97 were slowing, so I knew it was our race to lose at that point.

“I moved down and tried to conserve fuel then, because I started getting nervous that I was going to run out too,” he added. “These races are different every time. You never know what you’re going to get. I don’t think I’ve ever run a Crown race at that pace for that long. I tried to manage it as long as I could. I’ve had to learn the hard way a lot of times here while leading. I’ve run out of fuel and crashed multiple times. I tried to take what I’ve learned from the past and put it to use here today.”

“Two times in a row, makes him go!” said Nolen in victory lane, referring to Windom’s victory in the most-recent USAC Silver Crown race in Springfield, Ill., on Aug. 18. “I can’t tell you how happy I am! We won three races this year: two big Silver Crown races and the Little 500. That’s a great year!”

Coons, a native of Tucson, Ariz., who now lives in Greencastle, Ind., had an amazing race too. He ended up 16th, but at one stage of the race he was the most dynamic driver on the track.

Coons, who has won the pole for this event four times in the past, almost got a fifth one in ProSource qualifying. He qualified second with a time of 30.286 seconds, which was just 0.072 off Wilson’s pole-winning time.

Like Windom he had a great start, as he took the lead from Wilson and led the first six laps before Bacon got by. But Coons was still definitely in the hunt, as he ran in second or third until he had to head to the work area after the red flag for Bland.

He didn’t give up, and he got busy picking off cars after the restart. He was 20th by lap 17, 18th by lap 18 and 17th by lap 19. Joe Liguori proved hard for him to pass, but after Liguori passed Austin Nemire, Coons did the same on lap 25 to move into 16th place.

Coons passed both Liguori and Kyle Robbins on lap 29 to move into 14th, and then he passed Chris Urish on lap 32 for 13th place, which put him right behind the polesitter, Wilson.

He got 12th when Bacon couldn’t restart after the second red, 11th on lap 36 when he passed Wilson, and he was back in the top 10 on lap 38 after he passed Joey Moughan.

The announcers took notice of Coons’ charge, especially when he passed Shane Cottle for ninth on lap 40 and then passed Byrne and Grant between Turns 1 and 2 on lap 41 to rise to seventh.

Coons was still seventh by the halfway point and he remained in that position until lap 64, when Cottle and Grant both got by. He remained in ninth and looked to be well on his way to at least a top-10 finish and maybe even quite a bit better until lap 89, when he slowed on the backstretch and retired when something in his car’s driveline broke with 87 laps complete. He was 16th in the final rundown.

The next event is coming right up this Saturday, Sept. 8, on the paved oval at Lucas Oil Raceway in Indianapolis in Brownsburg, Ind. Nolen Racing won two USAC Silver Crown races there with Johnny Parsons in 1991 and Jim Keeker in 1995. The pits open at noon, with practice set for 3 p.m., qualifying for 6 p.m. and racing at 7 p.m. The event will be available live via pay-per-view on Speed51.com, and will also air at a later date on MAVTV.

The season finale is Sept. 22 on the dirt of Eldora Speedway in Rossburg, Ohio.