Coolshirt Pro Jr. Dragster low qualifier Kimberley Messer earned the win over Thomas Davis when she ran a 7.908-second pass on a 7.90 dial-in next to Davis’ breakout 7.894. Cody Sims broke out in the Gilbert Motorsports Top Jr. Dragster final round, but opponent Mallory Logan’s red light guaranteed Sims the win at the starting line. 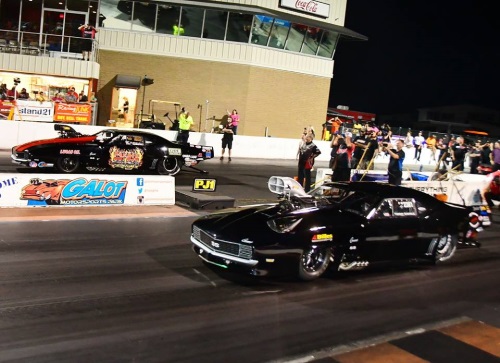 Tommy D’Aprile (near) over Caruso

PRO BOOST
A black ’69 Camaro with a Noonan engine and Al Billes supercharger was guaranteed the Pro Boost win going into the final round, as near-teammates Tommy D’Aprile and Marc “the Rodfather” Caruso were set to square off for the trophy. It ended up being the closest race of the day, with D’Aprile leading out of the gate with his .007 reaction time and holding on through the eighth-mile stripe with a 3.765 at 199.75. No slouch with a .025 light, Caruso came up just 13 thousandths of a second short with his 3.76 at 197.39.

“When you’re the No. 1 qualifier, it seems like it’s tough to win, too,” D’Aprile said. “I’m just blessed to be a part of this team. I’m dedicating this win to my dad’s 80th birthday (on Friday). He’s someone who allowed me to start racing, so it’s special for me to win this for him and to win with these guys and win that final the way we did. That was a close one.”

D’Aprile and the Billes-owned-and-tuned ’69 Camaro were equally quick in earlier elimination rounds, running 3.805 over Larry Higginbotham and 3.767 over Ric Fleck, both with superior reaction times. Caruso in his Caruso Family Racing ’69 Camaro took down heavy hitters Jerico Balduf and John Strickland before facing D’Aprile, now a two-time winner this season. 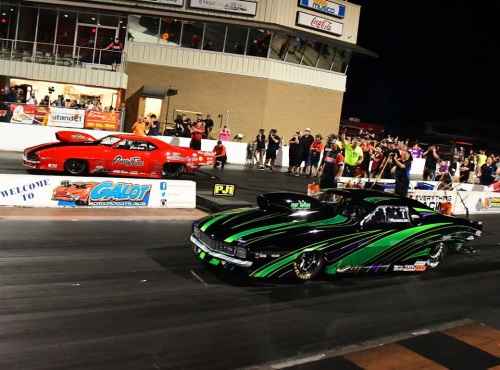 Tommy Franklin (near) over Harris

PRO NITROUS
Two-time and defending Pro Nitrous world champion Tommy Franklin began his late-season charge for a third consecutive title when he took down points leader Jason Harris in the final round. Harris left the starting line first in his Musi-powered “Party Time” ’69 Camaro, but Franklin drove around his 3.826 at 199.29 with a weekend-best 3.709 at 202.06. It was Franklin’s first win of the season and his first win in his new Bickel-built, Musi-powered ’69 Camaro.

“We’re chasin’ Jason,” Franklin said. “He’s got a good lead out on us and we needed him to go out earlier, but he’s a strong competitor and he’s really running good. We picked up a round and closed that gap a little bit. We’re going to stay after it these next two races. All we can do is try to win them both and let the rest of the cards fall as they may.”

Franklin moved past the first round with a 3.828 over Tyler Jenkins, who was uninjured after impacting both retaining walls. The Fredericksburg, Virginia, native improved to a 3.742 over John Camp and a 3.731 over Randy Weatherford. Harris qualified No. 3 and similarly improved consistently in victories over Ed Burnley, Tommy Mauney and Lizzy Musi. 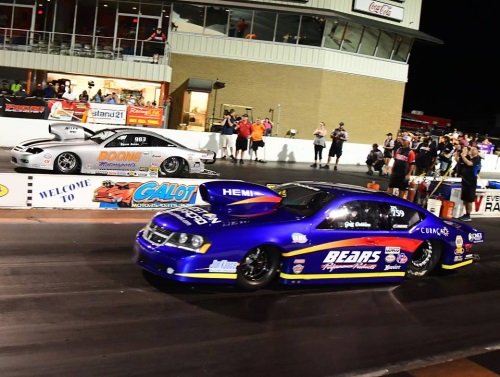 Jeff Dobbins (near) over Boone

EXTREME PRO STOCK
Jeff Dobbins went to bed Friday night unsure of his ability to go rounds after qualifying on the bump spot in his Bears Performance/Curacao ’14 Dodge Avenger. A holeshot win in the opening round, coupled with quick reaction times and a deadly-consistent car, was all Dobbins needed to change his attitude. By the final round, Dobbins was really on his game with a 4.10 at 176.19 to claim the win over Steven Boone and his 4.124 at 174.26 in the Boone Motorsports ’07 Chevy Cobalt.

“This win is special coming from the 16th hole – that’s hard to do,” Dobbins said. “We’re a good team, but we just struggled all year. We just stuck together. Yesterday, we weren’t feeling good about our chances. We woke up this morning and came out swinging. We knew we had a good car and a good team, we just had to get it done.”

Dobbins used a pair of 4.12s to move past John DeFlorian Jr. and Rick Cowger in the first two rounds. He ran 4.116 next to a red-lighting Trevor Eman and the Aruba.com Mustang in a “battle of the Caribbean” in the semifinals. Boone, who won his first PDRA win earlier this season, beat Matt Giangrande, Chris Powers and 2016 world champion John Pluchino en route to the final. 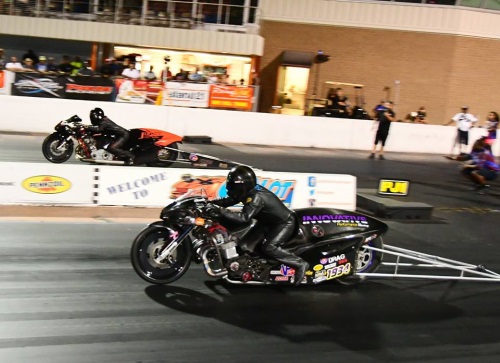 PRO EXTREME MOTORCYCLE
Ronnie “Pro Mod” Smith went wire-to-wire to enjoy his career-best weekend in the PDRA’s Pro Extreme Motorcycle class riding his Innovative Performance ’16 Suzuki to progressively quicker passes from the No. 1 spot. Smith’s final shot was a 3.997 at 175.59 over Chris Garner-Jones and his 4.08 at 173.83.

“We’ve worked hard all year,” said Smith, a first-time winner. “We’ve came so close, broke a record, and we’ve just been chasing this win all year. It’s just the total package we have in this bike. It’s been on a string all weekend.”

Smith, the points leader, ran a 4.059 over Terry Wynn in the first round, then a 4.027 at 175.66 to hold off No. 2 in points, Terry Schweigert, in the second round. He then took advantage of a competition bye run in the semifinals. Meanwhile, Garner-Jones defeated T.T. Jones, Ehren Litten and Brunson Grothus. 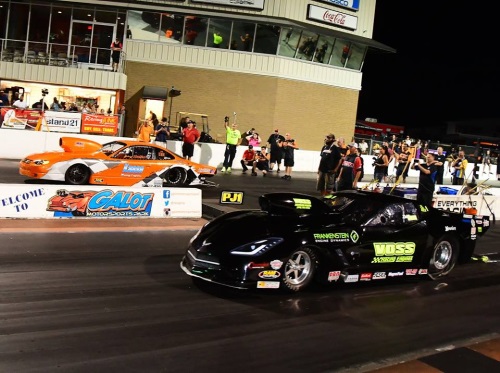 PRO OUTLAW 632
Pro Outlaw 632 points leader Johnny Pluchino didn’t let the pressure of a final-round match with defending world champion Dillon Voss get to him. In fact, he fed off the pressure, just as he did all day, unleashing a 4.251 at 167.38 to drive Dominic Addeo’s ’06 Ford Escort around the .003 reaction time and 4.298-second pass of Voss in his Voss Racing Engines ’17 Corvette.

“I saw a whole lot of Voss’ car in the final round,” Pluchino said. “I think I got close to the centerline because I was looking at him so much, but we were able to get around him. I’ve been trying to get around him for a while now. He’s been a thorn in my side, so we’re excited to pull off the win. We’ve got a lot of momentum going into these last two races.”

Pluchino kicked off eliminations with a 4.277 on an earned bye run, then improved to run 4.247 over Tony Gillig and a 4.233 over Jeff Ensslin. Voss, who maintained his spot directly behind Pluchino in the points, raced around Alonzo Williams, Jeremy Huffman and Jordan Ensslin before the final round. 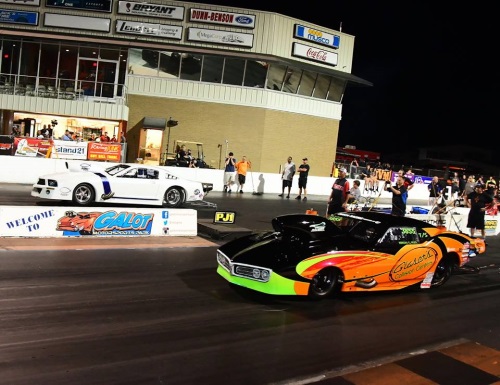 Aaron Glaser (near) over Moore

TOP SPORTSMAN
Aaron Glaser successfully defended his 2017 Drag Wars victory in Elite Top Sportsman when his Albert-powered Glaser Collision ’68 Firebird ran a 4.064 on a 4.06 dial-in over Scott Moore’s 4.143 on a 4.10 dial-in in his PAR-powered ’08 Mustang. Glaser previously defeated No. 1 qualifier and engine builder Billy Albert, Henry Underwood and Cam Clark before the final round. 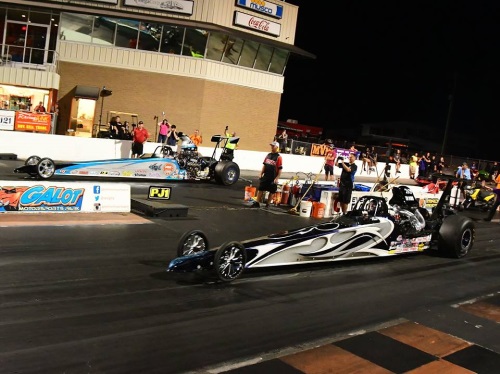 TOP DRAGSTER
It was a battle of North vs. South in the Elite Top Dragster final round, as Tom Martino drove his Youngstown, Ohio-based “Sharktino” dragster to a 4.097 on a 4.08 dial-in, while Mocksville, North Carolina’s Russ Whitlock broke out with a 4.216 on his 4.22 dial. Martino defeated Alan O’Brien, Camrie Caruso and Kyle Harris on his way to the final round.

The PDRA 2018 Tour will continue next month at the PDRA Fall Nationals, Oct. 4-6, at Darlington Dragway in Hartsville, South Carolina.