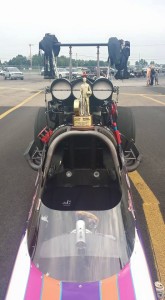 “It was a tough weekend,” Demke admitted. “The track surface was over 120 degrees through qualifying – very slick conditions and our car shook the tires every round of qualifying. We tried everything and just couldn’t get a handle on it. We actually had to go so far out of our tuning window that we had to pull out our log book from 2006 to find a tune-up for the conditions. We went old-school.”

Adding to the weekend’s old-school theme was the lack of data. The car’s on-board data recorder shut off upon launch during the second qualifying session. The team was unable to fix the recorder, so they resorted to manually noting as much as possible. The crew read the spark plugs after each run and attached a GoPro camera to the car to keep an eye on wheelspeed.

“I’m just amazed that we were able to get the car to perform as it did. The end results don’t really reflect the challenges we faced.”

Demke went into Sunday’s eliminations qualified in the No. 4 spot with a 5.454 elapsed time. He went on to face three nitro-injected A/Fuel cars, beginning with Anthony Dicero’s Tripp Tatum-driven entry.

“Come Sunday, I had low confidence that our tune-up would work because qualifying was such a struggle and we didn’t have any current data. We went to that old 2006 tune-up and sure enough, it went down the track with no shake first round. We just nudged it a little quicker each round. I really thought I would get my butt handed to me second round by Jared Dreher. He was really the car to beat all weekend and slowed for whatever reason in the semis.”

After a 5.434 first-round win over Tatum and an improved 5.428 victory over Dreher, Maddern Racing would line up alongside one of their most formidable opponents of late, Mia Tedesco and the Hirata Motorsports team. In the Buckeye Fuel Wars final round, Demke left the starting line first by thousandths of a second and ripped off a 5.388, low et of eliminations, to beat Tedesco’s 5.425 effort.

“We were pitted next to ‘Miss Mia’ and the Hirata clan and of course the usual shenanigans and fun were going on between our teams. They’re a great group of people, along with the rest of the Division 3 teams, and we have a lot of fun racing with them. I have to hand it to Hirata and Tedesco. They stepped up in the final as well. Their final-round pass was quicker than our semifinal pass, so we couldn’t just re-run what we ran. We knew they would step up so we had to twist the knobs a little harder, too. It made for a very good race,” Demke added.

Chris Demke and the Maddern Racing team are heading back to the west coast with three Wallys in tow after winning the Norwalk and Chicago national events and now the Columbus regional. Next up on the schedule is the NHRA Northwest Nationals near Seattle, August 7-9.

“While the NHRA Mello Yello Series is doing their Western Swing, we just completed our Midwestern Swing. We’ll bring the car back to the west coast and meet up with all of the west coast guys in Seattle. We want to give Joey Severance a challenge.”