PITTSBORO, N.C. (September 16, 2018): While two races remain on the 2018 PDRA Tour, Musi Racing Engines customers have so thoroughly dominated the season that It’s now become impossible for anyone to top Musi Racing Engines in the 2018 version of Flatout Gaskets Nitrous Wars. The Musi engines camp has achieved four of the five low qualifier awards, but, thus far, only one driver has repeat this feat.

Tommy Franklin scored both low ET of the recent Drag Wars and won the event with solid command of the Switzer Dynamics Pro Nitrous presented by MoTeC competition. His 959 Musi engine powered him to a pack-leading 3.710 at 202 MPH. This was Franklin’s second pole of the season, having led off the year with his first #1 qualifier. Fellow Musi customers, Jason Harris and Randy Weatherford have also scored low qualifiers throughout the season.

Jay Cox earned a point for Buck Racing Engines at the second stop on the tour, and has remained a steady force, keeping himself and Buck in the hunt for both the championship and the Nitrous Wars.

At the recent Drag Wars at GALOT Motorsports Park, Musi customers Randy Weatherford, Lizzy Musi, Jason Harris and Franklin were all that remained by the semi finals. Harris and Franklin advanced to the final round where Harris fell off the pace and Franklin bested his qualifying effort to take the win with a 3.709.

The results of that event closely mirror the current points standings. Harris currently leads the field by nearly 600 points. Franklin follows in second with Musi, Weatherford and Cox rounding out the top five.

PDRA events in Darlington and Virginia will wrap up the 2018 season. Thus far, it’s Franklin-2, Harris-1, Weatherford-1 and Cox-1 in the Flatout Gaskets Nitrous Wars. The parity in low qualifier means it’s still anyone’s game to take home the coveted Nitrous Bottle trophy at season’s end. Watch as the Flatout Gaskets Nitrous Wars plays out on the biggest eighth-mile stage in drag racing.

Check out the great products available at Flatout Gaskets. 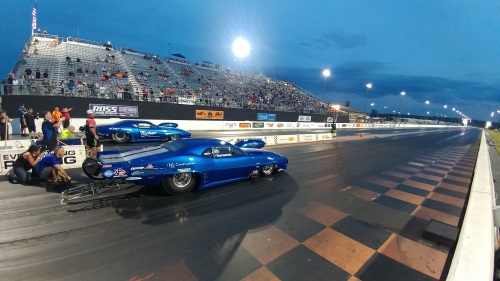