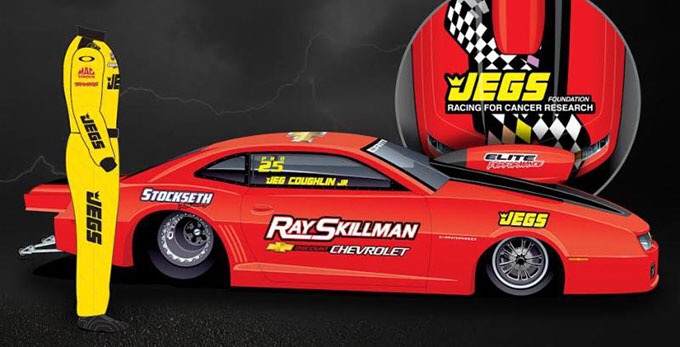 Jeg Coughlin Jr. is excited to make his Pro Stock return for a number of reasons. One of the predominant ones was the chance for his 2015 NHRA Mello Yello Drag Racing Series season debut to come at scenic Sonoma Raceway, the site of the 28th annual NHRA Sonoma Nationals, July 31-Aug. 2.

The five-time Pro Stock world champion, whose current plan is to return for a three-race stretch starting in Sonoma, jumped at the opportunity to make a brief return to the Pro Stock ranks to race with the Elite Motorsports team, which also fields the racecars for reigning world champion Erica Enders.

Driving the Elite Motorsports Chevy Camaro, Coughlin is excited for the new challenge and for it to start in Sonoma, which is the second stop of NHRA’s Western Swing. 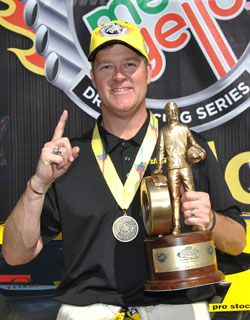 “It’s extremely exciting for a number of reasons,” said Coughlin, whose last world championship came in 2013. “One, getting back in the car is going to be extremely challenging without a whole lot of testing. Two, going to a track that I know and really enjoy like Sonoma Raceway makes it a little more easier to get over some of those jitters, so to speak. Three, to have the team that I’m fortunate to be associated with going into the event is pretty stellar. I’m excited.”

Khalid alBalooshi (Top Fuel), Courtney Force (Funny Car), Jason Line (Pro Stock) and Eddie Krawiec (Pro Stock Motorcycle) are the defending winners of the event, which will be televised by ESPN2. It is the 15th of 24 events during the 2015 NHRA Mello Yello Series season and Coughlin’s current plan calls for him to race in Seattle to finish out the Western Swing and then in Indianapolis.

Pairing up with Enders means the Elite Motorsports team will also have the last two Pro Stock world champions competing on the same team, something that clearly appealed to Coughlin. Enders has put together a strong title defense in 2015, winning four times and sitting second in points to another four-time winner in 2015, Greg Anderson.

Racing alongside Enders also fueled Coughlin’s fire and he said he would be plenty motivated to win heading to Sonoma.

“As a competitor, no matter what I’m doing, I’m striving to do well or win or achieve whatever the goal is at hand,” said Coughlin, who has 58 career Pro Stock wins, good enough for eighth all-time and fourth in Pro Stock history. 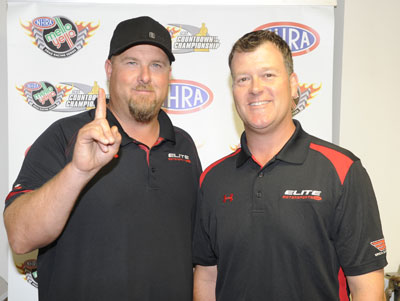 “Returning back to the seat with a team like Elite and a teammate like Erica gives me a lot of confidence that I’ll be able to hop in and have a car that’s capable of running up close to the top, if not the top spot. I’ve been doing a lot of bracket racing this year, and I’m looking forward to getting out and applying that and making some good Pro Stock runs.”

In a perfect world Coughlin would have made at least a handful of test runs in the Camaro before heading to Sonoma to compete against the top names in the Pro Stock class. That includes Anderson and Enders, as well as a host of other standouts such as defending event winner Line, 2012 world champ Allen Johnson, who won recently in Chicago, Denver champ Larry Morgan, Chris McGaha, Shane Gray, Vincent Nobile, Jonathan Gray, V Gaines, Rodger Brogdon and rookie Drew Skillman.

Instead, Coughlin will have to rely on the talent and instincts that have led to years of Pro Stock success. Some early qualifying success in Sonoma would also go a long way in helping set up a successful weekend.

“It would’ve been ideal, without question, to have a few test runs here or there,” Coughlin said. “But the way the schedule played out, we just didn’t see that in our plan of options. I’ve talked it over with Mark Ingersoll, and without doing any testing, we looked at some data on the computer. He and I worked together real well over the last couple of years.

“We’re able to align ourselves logically that way, and barring any little issues, we should be able to go out and go A to B on the first run and peck away at it as normal and see if we can continue to improve. Hopefully, we’ll be the last one standing on Sunday evening.”