In Coolshirt Pro Jr. Dragster, Cameryn Hawkins earned her first PDRA victory when she won on a double breakout over Nicole Zuccarelli, with Hawkins’ 7.89 beating Zuccarelli’s 7.86. Zach Shirkey picked up the win in Gilbert Motorsports Top Jr. Dragster, running 8.969 on an 8.96 dial-in over Brooke Miller’s 7.995 on a 7.94 dial-in. 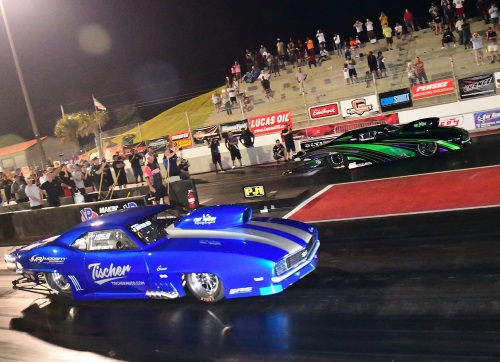 Sauro (near) over Franklin

PRO NITROUS
The odds were stacked against Danny Sauro and his Tischer Acura Nissan-backed ’69 Camaro going into the Pro Nitrous final round against defending world champion Tommy Franklin. Sauro was strong in prior rounds, but Franklin had fired off low elapsed time of every round, including a near-record 3.659 in the semifinals. Sauro and tuner Justin Elkes stepped up in a big way, though, loading up a 3.652 at 204.17 to reset the ET national record and defeat Franklin’s 4.001 at 192.80 in the all-Musi final.

“It’s just been a great weekend,” Sauro said. “This is my second year in Pro Nitrous, and Justin Elkes and Modern Racing are the reason why I’m here. Justin said we were gonna go after it in the final, and I believed him. Whatever he says, we usually accomplish. As soon as I let go of the button, I said, ‘there’s something here, there’s something here.’ When it picked up the front wheels mid-track, I knew it would be fast. The faster the car goes, the smoother it is – the car just felt wonderful.”

Sauro became the fifth different Pro Nitrous winner in six contested races this season, and the second first-time winner on the year. He first moved past Edward Wilson and John Camp before running 3.682 next to a red-lighting Jay Cox in the semifinals. Franklin in his “Jungle Rat” ’69 Camaro advanced to his second consecutive final round after defeating John Hall, No. 1 qualifier Lizzy Musi and Todd Fontana. 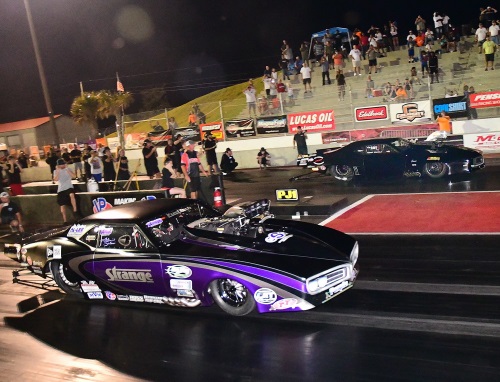 PRO BOOST
Less than a month after a sweeping Pro Boost performance at PDRA Drag Wars, Pro Modified veteran Tommy D’Aprile added a third victory to his career-best season in tuner and car owner Al Billes’ supercharged ’69 Camaro. In a final-round battle of the No. 1 and 2 qualifiers, D’Aprile laid down low ET of eliminations, a 3.69 at 201.25, to defeat Melanie Salemi’s 3.706 at 200.62 in her “Purple Reign” ’68 Firebird.

“The final was decided by four thousandths,” D’Aprile pointed out. “Melanie was out on me a little, we caught her and luckily stayed ahead, but man, four thousandths is close. We have a lot of respect for Melanie and her team. Any of these cars at any given time can run a good number, so you just have to be ready. We didn’t expect them to run a .70, but they did phenomenal. Fortunately we put the car back in the .60s. We’ve got to be on our toes and not be complacent, treating every run equally and being as diligent as possible.”

D’Aprile improved from a 3.773 over Jr. Ward in the first round to a 3.716 over Chip King in the semifinals, while Salemi appeared in her first final round of the season after round wins over Summer Drags winner Chuck Ulsch and Drag Wars runner-up Marc Caruso. 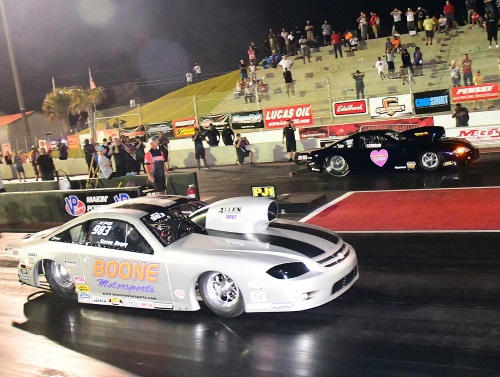 Boone (near) over Voss

EXTREME PRO STOCK
Steven Boone and Dillon Voss were locked together through the first three rounds of Extreme Pro Stock competition, with their elapsed times in the second two rounds separated by just .003 seconds. The drivers were door-handle-to-door-handle off the starting line in the final round – Voss’ .008 light to Boone’s .009 – but Voss stumbled to a 4.551 at 126.76 in Enoch Love’s ’05 Cavalier while Boone drove his Boone Motorsports ’07 Cobalt to a winning 4.074 at 176.54

“This one was tough, but we’ve had a good weekend,” Boone said. “The PDRA kept a great track, especially for the conditions out here. We had a lot of mechanical issues that we worked through. A lot of friends helped us. It’s been a tough win, so it sure feels good to pull it off.” 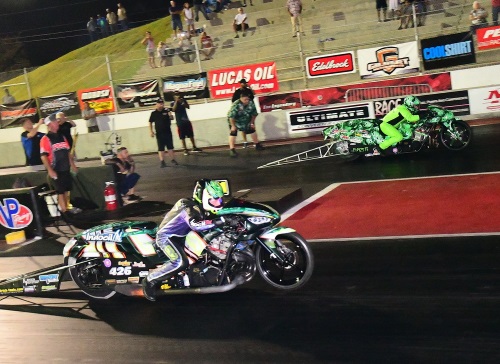 Grothus (near) over Allen

PRO EXTREME MOTORCYCLE
Winless in Pro Extreme Motorcycle since late 2016, Brunson Grothus was eager to fight through an ultra-competitive field of motorcycles to earn the Fall Nationals victory. His 4.016 at 175.99 on his Indocil Art ’15 Suzuki defeated first-time finalist Spencer Allen’s 4.082 at 174.55.

“I feel very fortunate,” Grothus said. “Everything fell our way. I had three really tight races – a .024 stripe, .028 stripe, and a .046 stripe. We absolutely could’ve ended up on the other side of those races. With the way everyone was running this weekend – world records and career-bests – I’m very fortunate to be the last one standing.”

No. 1 qualifier Terry Schweigert backed up his record-setting 3.914 at 184.58 from Friday night with his second-round pass of 3.942 at 181.09 aboard a new turbocharged entry, though the Canadian dairy farmer left the starting line too soon. 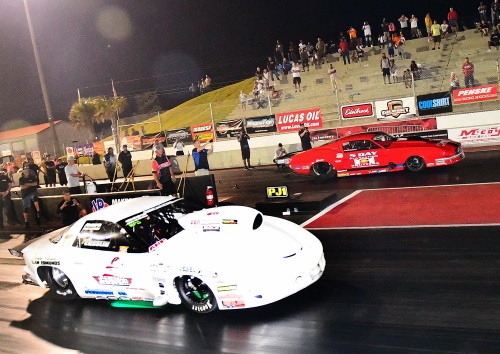 PRO OUTLAW 632
Third-generation drag racer Jordan Ensslin has been improving his performance in Pro Outlaw 632 at every stop on the PDRA tour. The Lakeland, Florida-based driver was incredibly consistent throughout Saturday eliminations at the Fall Nationals, posting a 4.26 and three consecutive 4.25s, including a 4.257 at 167.60 over Daryl Hameetman’s 4.291 at 165.50 in the final round.

“Ken Kershaw and I went up to the PRI Show a couple years ago to get this Outlaw 632 class involved with the PDRA, and my dad (Jeff) and I have been chasing one of these 660 Men since then,” Ensslin said. “We finally got one. It’s satisfying for me to not only win the event, but to know that I’m bringing smiles to the faces of everyone who’s supported me along the way. It’s so surreal to be in this position.”

Ensslin and the Ensslin Racing/Team Edmunds ’02 Trans Am raced out of the No. 4 slot and took down Robert Sellers, Mike Murphy and points leader Johnny Pluchino. Hameetman in his 5 Day Plantation Shutters ’67 Mustang raced past Matt Buck, Jr. Ward and defending world champion Dillon Voss before the final round. 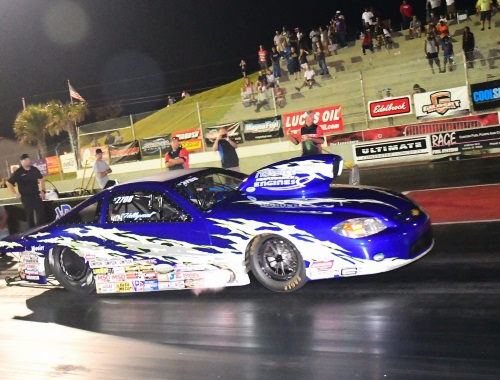 TOP SPORTSMAN
Selma, North Carolina’s Donny Urban earned his second Elite Top Sportsman victory of the season in his Nesbitt-powered ’06 Cobalt, running a 4.041 on a 4.04 dial-in on a single after Bruce Thrift couldn’t fire up for the final round. Urban reached his third final round in four 2018 PDRA appearances after defeating Tim Molnar, No. 1 qualifier Billy Albert and Randy Perkinson. 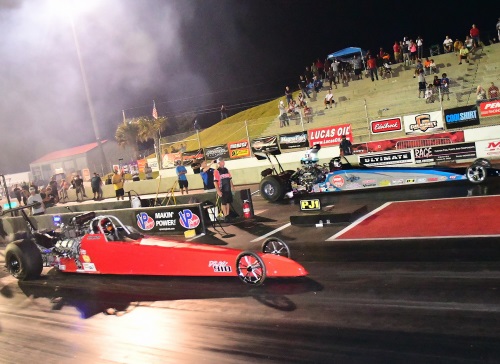 TOP DRAGSTER
Chaz Silance added a second 660 Man to his 2018 collection with his Elite Top Dragster final-round victory over Tom Martino, who won the PDRA Drag Wars last month. Both drivers encountered trouble after leaving the starting line, but it was Silance’s 4.012 on a 3.83 dial-in getting the win over Martino’s 4.262 on a 4.06 dial. Silance’s Buck-powered, supercharged dragster previously defeated Josh Duggins, Lindsey Barker and Nick Hamilton.

Appearing in her second final in just three races, Kannapolis, North Carolina’s Angela Gantkowski notched her second Top Dragster 32 win using a 4.424 on a 4.42 dial-in over William Brown III and his 4.634 on 4.64 dial-in.

The 2018 PDRA Tour will conclude in two weeks at the PDRA World Finals, Oct. 18-21, at Virginia Motorsports Park in Dinwiddie, Va.