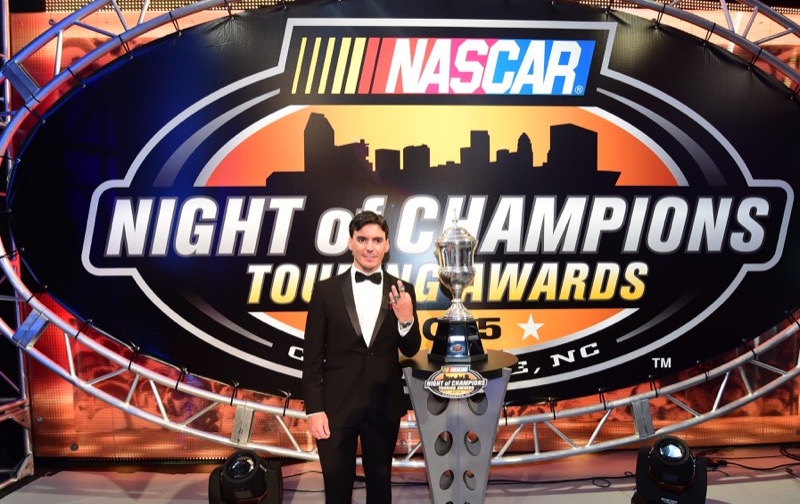 Daytona Beach, FLA – At the end of a week of celebrations and immersion in NASCAR’s heart in the United States, NASCAR Whelen Euro Series drivers were rewarded for their 2015 achievements on Saturday at the NASCAR Hall Of Fame / Charlotte Convention center, on the stage of the NASCAR Night Of Champions Touring Awards.

The Champions Week started with Ander Vilarino’s car showcased inside the NASCAR Hall Of Fame together with all the 2015 NASCAR Touring Series champions. On Wednesday, Whelen Engineering’s Vice President of Motorsports Phil Kurze introduced the ceremony that saw Vilarino unveiling his name in the Whelen Hall Of Champions, the section containing a recognition to all the champions in NASCAR’s history, as the Spaniard won the third title in the Series’ four season under the NASCAR banner.

On Friday, the NWES delegation – led by Jerome and Anne Galpin, NWES President / CEO and Vice President, Competition and Marketing – had the chance to visit the heart of NASCAR in Mooresville, North Carolina, stopping by the impressive Team Penske’s facilities, NASCAR’s Wind Tunnel and Kyle Busch Motorsports’ headquarters to witness the highest level of technology and professionalism in NASCAR.

After the Grand Champions Breakfast, in which the NASCAR Whelen Euro Series drivers were recognized one by one for their accomplishments, the week of celebrations culminated with Saturday’s NASCAR Night Of Champions Touring Awards, the magnificent banquet that officially closed the 2015 season.

“I wanted to be back so much after losing for just one point in 2014 that this title feels really special, the best of the three I won. Having my name in the NASCAR Hall Of Fame forever is a tremendous honor,” said the NWES all-time winningest driver. “NASCAR is growing bigger every year in Europe thanks to the effort Jerome and Anne Galpin and the entire organization put in the NASCAR Whelen Euro Series and I’m sure NASCAR will be the reference point in the Old Continent for the future. I want to thank especially my wife for the incredible support and motivation she gives me, all my sponsors and my team for inviting me to race in this series before it was officially sanctioned by NASCAR and because without them I could never be a three-time NASCAR champion.”

“To be at the heart of NASCAR sharing the Night of Champions with such a group of champions was something that gives me motivation to work as hard as possible to climb one more step next year and put my name on the wall in the Hall Of Fame,” said an enthusiastic Alon Day, who finish second in points, won the Rookie Of The Year Award thanks to his success in the Junior “Jerome Sarran” Trophy, the Most Popular Driver Award and is eager to battle with Vilarino for the 2016 title. “Many congratulations to Ander. He is a true champion and really deserves the champion ing, driving against him was a pleasure and I can’t wait to start working for more wins next year!”

Philipp Lietz collected two prizes for his win in the Challenger Trophy and his #67 GDL Racing Ford Mustang in the Teams Championship.

“It is always fantastic to be here and be part of such an extraordinary event and to be rewarded in such a spectacular context for your hard work. We had a really consistent season this year and you can’t do it without a great team and the right team spirit,” said the Austrian. “It feels great and I want to thank everybody from sponsors to family and friends!”

ELITE 2 Division Champion Gianmarco Ercoli simply cannot wait to be back on track and earn the chance to return to Charlotte. “I don’t usually become emotional on such occasions, but this time it was so amazing that I couldn’t avoid it. To be in Charlotte and see with my own eyes the incredible amount of work and technology the teams and the organization put in racing is impressive.To be in the NASCAR Hall Of Fame and live the Awards experience left me even more anxious to get back to work and earn the chance to be back on stage in 2016!” he said.

“The banquet was an unforgettable experience. Being on that stage where all those talented drivers were rewarded is just amazing, in fact the whole evening was amazing. The way our team, my wife and I were welcomed by the Nascar family is astonishing and it makes me understand that Nascar is not just about racing, it is much more than that and I am proud to be part of it,” said owner/driver Jerry De Weerdt, who was rewarded for his win in the Gentleman Trophy.

“It was such an amazing welcome from NASCAR, a family that respects and honors each and everyone of its members. It was wonderful to have the chance to be on stage in front of all the drivers and the entire NASCAR family. I was impressed by the incredible organization and it was really special to meet all the other drivers share our passion for racing. To live such an experience really gives you the inspiration to give your best and be back next year,” concluded NASCAR Whelen Euro Series Driver Development and Nexteer Road To Daytona member Ulysse Delsaux.

NWES drivers and teams are now headed for a few weeks of rest before the anticipation starts to build for a 2016 season that promises to bring the NASCAR Whelen Euro Series to the next level. 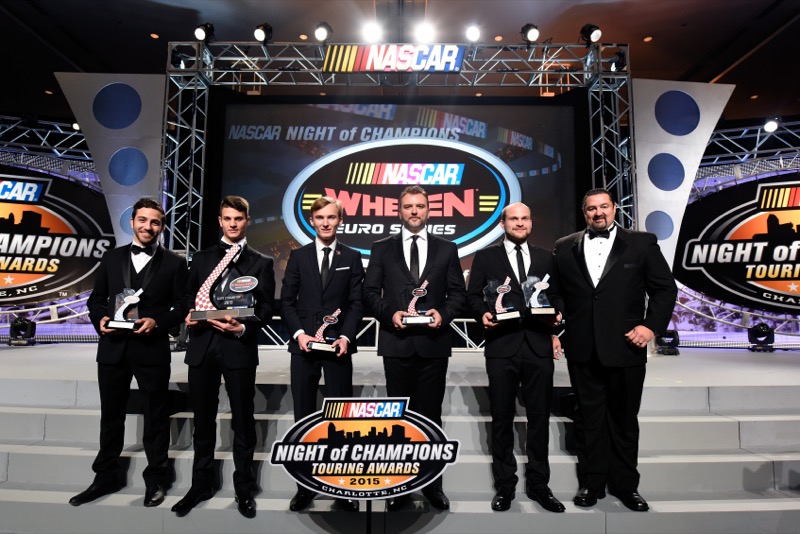 CHARLOTTE, NC – DECEMBER 12: during the NASCAR Night of Champions Touring Awards at the Charlotte Convention Center on December 12, 2015 in Charlotte, North Carolina. (Photo by Jared C. Tilton/NASCAR via Getty Images)