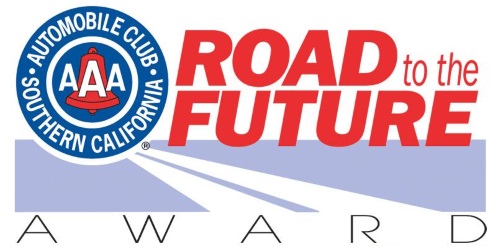 The award, which is presented during the NHRA’s annual championship awards ceremony on Monday, Nov. 12 at the Ray Dolby Ballroom at Hollywood & Highland in Hollywood, Calif., recognizes the top rookie competitor in the NHRA Mello Yello Drag Racing Series and offers a $20,000 prize and traditional trophy to the winner. The nation’s leading auto racing journalists select the winner through a voting system based on the following criteria: number of events competed in, performance on and off the racetrack, participation in NHRA promotions and relationships with fans, sponsors and media.

“For more than a century, the Automobile Club of Southern California has served our members’ communities, committed to improving traffic and driver safety and providing member services with integrity and professionalism,” said John Boyle, President and CEO of the Automobile Club of Southern California. “Similarly, the Road to the Future Award which honors the newest racers in the NHRA Mello Yello Drag Racing Series, has come to represent these same attributes in motorsports. The nominees this season have demonstrated competitiveness on the track and a commitment to the racing community off the track. They show exceptional potential for the future. On behalf of the Auto Club’s employees and members, I congratulate all of the candidates for this year’s award and look forward to see how they achieve great things in the future.”

Clontz has entered 15 events during the 2018 season on her Steamfitter Local 602 motorcycle, earning her first career round win this season in Dallas. Clontz has career-bests of 6.914-seconds at 195.22 mph.

Graham raced his Reliant Auto Group Chevrolet Camaro at eight NHRA Pro Stock events in 2018, qualifying a career-best 12th at the season-opening race in Pomona. Graham posted a career-best E.T. of 6.620 in Sonoma this year.

Kinsley, who pilots the Road Rage Fuel booster dragster in Top Fuel, made five appearances during the 2018 campaign, qualifying a season-best eighth in Dallas. A year ago, Kinsley, who has two Top Alcohol Funny Car wins in the NHRA Lucas Oil Drag Racing Series, advanced to the finals at the prestigious Chevrolet Performance U.S. Nationals. Kinsley’s career-best performances are 3.757 at 322.96.

In Top Fuel, Litton raced in 13 events during the 2018 season in his Litton Financial dragster, defeating the likes of Tony Schumacher, Brittany Force and Leah Pritchett along the way. Litton has three round wins on the year, powering to a career-best time of 3.901 in Atlanta and a career-best speed of 318.17 in Dallas.

Maroney made his Top Fuel debut during the 2018 Mello Yello Drag Racing Series season at Epping. He competed in five events and had a solo round victory at Denver. His career best elapsed time and speed were 3.879-seconds at 302.96 mph during Sonoma.

Oehler has competed in 15 events in Pro Stock Motorcycle during the 2018 season on his Flyin’ Ryan Racing/B&K Cylinder Heads bike. He has earned two rounds wins along the way, racing to a career best time and speed of 6.875 at 196.53 during the fall race at Charlotte.

Stroupe has made seven appearances during the 2018 Pro Stock season in his Grainger Commercial Grading Chevrolet Camaro. He qualified a season-best No. 13 at the fall race in Charlotte, racing to a career-best pass of 6.708 at 206.01 that same weekend.

Tornow has entered seven races during the 2018 season in Pro Stock Motorcycle, qualifying a season-best No. 14 at Maple Grove Raceway.

In Funny Car, Townsend raced seven times during the 2018 season, upsetting Jack Beckman at his debut race in Phoenix. Later this season, Townsend raced to a career-best showing of 4.026 at 308.99 in Houston.

Worm, who pilots the OutRun PD dragster in Top Fuel, has competed at eight events during the 2018 season. Worm earned her first career round win at the four-wide race in Charlotte, also posting a career-best pass of 4.004 at Maple Grove Raceway.