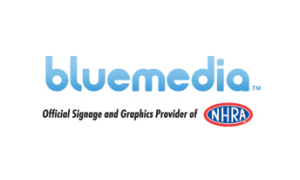 GLENDORA, Calif. (Dec. 21, 2015) – NHRA announced today that bluemedia has signed a three-year sponsorship extension to remain the official sign and graphics provider of the NHRA through 2020.

As an official sponsor, bluemedia will have signage rights at NHRA Mello Yello Drag Racing Series events as well as a presence on NHRA’s multiple media platforms including NHRA.com, National Dragster and social media. The sponsorship makes available business-to-business opportunities within the NHRA member track network as well as race teams.

“The NHRA has proven to be an amazing partner in furthering bluemedia’s strategy to increase our brand awareness nationally,” said Jared Smith, president of bluemedia. “Not only have the impression numbers been very valuable to us, but the relationships we have forged within the NHRA family of partners have also proven to be just as valuable. This stems from the first class operation ran by the great folks at the NHRA. There was no question that we were going to continue our relationship in this new multi-year agreement.”

With headquarters in Phoenix, bluemedia is one of the nation’s leading signage companies. Its clients include professional and collegiate sports teams, sports facilities and sporting events. To learn more, visit www.bluemedia.com.