Torrence won the category crown after he clinched the championship during eliminaitons at the NHRA Toyota Nationals at The Strip at Las Vegas Motor Speedway. In his championship season, Torrence raced to 11 victories including making NHRA history by sweeping the playoffs.

Todd raced to his first Funny Car championship Sunday during the opening round of eliminations Sunday at the Auto Club NHRA Finals at Auto Club Raceway at Pomona. He secured six victories during the season including winning the prestigious Chevrolet Performance U.S. Nationals. In the six-race playoffs Todd won three of them.

Smith won his third championship after not qualifying at the season opening event for the two-wheeled category in Gainesville. The team hit their championship stride beginning at Brainerd with three consecutive No. 1 qualifying positions. In the NHRA Mello Yello Drag Racing Series Countdown to the Championship Smith cemented his crown with three victories and took the points lead starting in Charlotte 2. He won the championship in dramatic fashion by defeating defending world champion Eddie Krawiec during the final round at the season finale.

“I am so blessed and thankful for this award,” Litton stated. “I’ve prayed for the opportunity to drive a Top Fuel dragster since I was eight years old and thought for a long time it was a longshot dream. The Worsham’s, and our team deserves the credit for putting me in this position. I am very grateful that two legends of the sport like Chuck and Del have the confidence in me to pilot their Top Fuel dragster.”

“Competition in the NHRA is fierce,” said Mark Kent, Chevrolet’s director of motorsports competition. “At every NHRA event, drivers of Chevrolet vehicles in the Funny Car, Pro Stock, Super Stock and Stock classes compete for race wins and valuable manufacturer points. Chevrolet is very proud of their efforts and is truly honored to again receive the NHRA Manufacturer Cup.”

The NHRA also presented a special Lifetime Achievement Award to legendary driver, “Big Daddy” Don Garlits, a pioneer in the sport of drag racing. Not only was Garlits the first drag racer to break through a myriad of speed barriers, he’s also known for his innovations in safety. Most notably, he perfected the rear-engine Top Fuel dragster design to create a safer driving experience and revolutionizing the class. 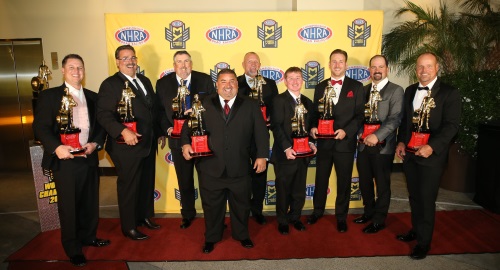 The 2018 NHRA Mello Yello Drag Racing Series awards ceremony will be available to view for fans worldwide on the internet starting Wednesday, Nov. 21, at NHRA.com and the NHRA channel on YouTube.