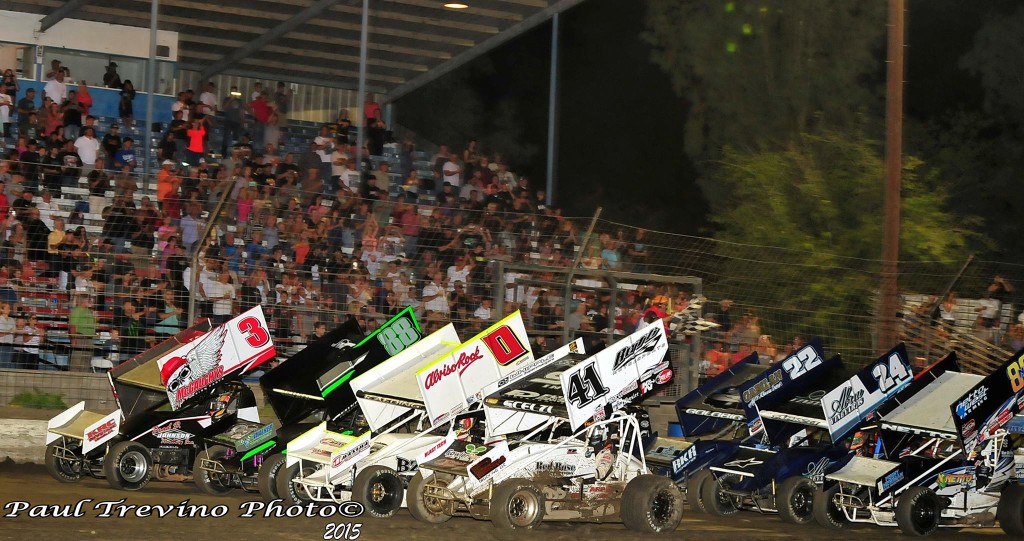 Aptos, CA – December 24, 2015…The King of the West 410 Sprint Car Series has officially released its 2016 schedule of events, which showcases 20 full point races at eight different venues, along with one co-sanctioned weekend with the World of Outlaws Sprint Car Series early in the season. 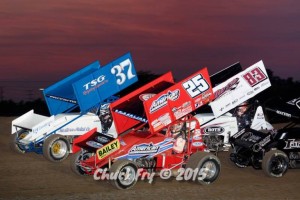 The upcoming season will mark the sixth campaign held under the King of the West Sprints banner and the 31st overall year since the Golden State 410 Series came into existence back in 1986. The schedule this coming season features an additional two full point events over last year and has a virtual even split of races held at Northern & Central California venues.

The season opens with a King of the West/ World of Outlaws Sprint Car Series co-sanctioned weekend on Friday & Saturday March 11 & 12 at the Thunderbowl Raceway in Tulare. The co-sanctioned weekend will award driver’s & team’s KWS show up points and offers the series a chance to work with the “Greatest Show on Dirt” at a major destination event on the west coast. Tickets for March 11 & 12 are currently on sale by calling the Thunderbowl Raceway box office at 559-688-0909.

In addition to the March weekend the King of the West 410 Sprint Car Series will also compete at the popular Thunderbowl Raceway one-third mile clay oval on Saturday May 14 in the Chris & Brian Faria Memorial, Friday & Saturday July 22 & 23 in the third annual Peter Murphy Classic & on Saturday October 8 in the KRC Safety Fall Shootout. The Peter Murphy Classic is growing to be a huge anchor event for KWS and expands to a double-header weekend in 2016.

The Ocean Speedway in Watsonville will see three appearances by the King of the West 410 Sprint Car Series this year, with those taking place on Friday June 24 in the annual Pombo/Sargent Classic, Saturday July 16 for the sixth annual Howard Kaeding Classic & Friday October 7. The HK Classic has become a very special one paying honor to the legendary “Campbell Comet.” The weekend also features the Civil War 360 Sprint Car Series vs. Taco Bravo Ocean Sprints on Friday July 15, which makes for a can’t miss double header at the Santa Cruz County Fairgrounds quarter-mile.

The centrally located Stockton Dirt Track will host the King of the West 410 Sprint Car Series on three different occasions once again in 2016. KWS will invade Stockton on Saturday May 21 for the Salute to the Dragon from Galt, a night paying honor to LeRoy Van Conett; Saturday June 18 & Saturday November 5 for the 33rd annual Tribute to Gary Patterson. The Tribute to GP is once again championship night for both KWS and the Civil War 360 Sprint Car Series in one huge evening of racing. The June date will also pay honor to a legendary driver, with details out soon.

The high-banked bullring of Placerville Speedway will also feature a trio of King of the West 410 Sprint Car Series events this coming season. The popular foothills based quarter-mile will see the powerful Winged 410 Sprints take to the track on Saturday April 23 for the first full point race of the season, along with Saturday July 30 & Saturday September 24. Now under the management of Russell Motorsports Inc. the track looks to be in for fresh beginnings and lots of excitement this coming year.

The Silver Dollar Speedway in Chico will hold two King of the West 410 Sprint Car Series events in 2016, with both being special shows on Saturday’s. The first will be on Saturday April 30, which marks the always prestigious 26th annual Dave Bradway Jr. Memorial & the second will be on Saturday June 4, in what will be the 4th annual David Tarter Memorial. The Bradway each season is a major cornerstone event for the series and the Tarter is becoming one as well at the famed quarter-mile clay oval.

The always exciting Keller Auto Speedway in Hanford will see two nights of competition by the King of the West 410 Sprint Car Series. The first takes place on Saturday July 9 and the second occurs on Saturday October 15 with the 31st annual Cotton Classic. The Cotton Classic is part of a big three weeks of Sprint Car racing in the Central Valley, with the KRC Safety Fall Shootout & the Southwest Contractors Trophy Cup in Tulare book ending it.

The hooked-up black adobe clay of Petaluma Speedway expands to a pair of KWS events this season; with the first taking place during the traditional Mothers Day weekend date on Saturday May 7 and the second occurring towards the end of summer on Saturday August 27. The August date is sandwiched in the middle of a huge four weeks in Nor Cal with the Johnny Key Classic, Louie Vermeil Classic & Gold Cup all taking place over four straight weekends of racing.

The famed Calistoga Speedway plays host to the King of the West 410 Sprint Car Series on one night only in 2016, with that occurring at the annual Wine Country Classic on Saturday June 25. The night of racing is once again held during the same weekend that the NASCAR Sprint Cup Series competes down the road in Sonoma.

“It’s going to be a great year for the King of the West Sprint Car Series,” said John Prentice of Prentice Motorsport Group. “If you look at the schedule you’ll see a number of big events and that’s a major focus. The geographic region for travel is also tightened up this year and it’s a good mix of Northern California & Central Valley based tracks. The schedule worked out great with only a couple conflicts again between KWS, Civil War and the Ocean Sprints, so I can’t thank all the promoters enough for working together to make it happen.”

Info on the King of the West 410 Sprint Car Series can be found at www.racepmg.com

Be sure to like the KWS Facebook Page at http://www.facebook.com/kingofthewestsprints and become a member of our Twitter community at https://twitter.com/KwsSprintRacing for all the latest breaking news regarding the series. 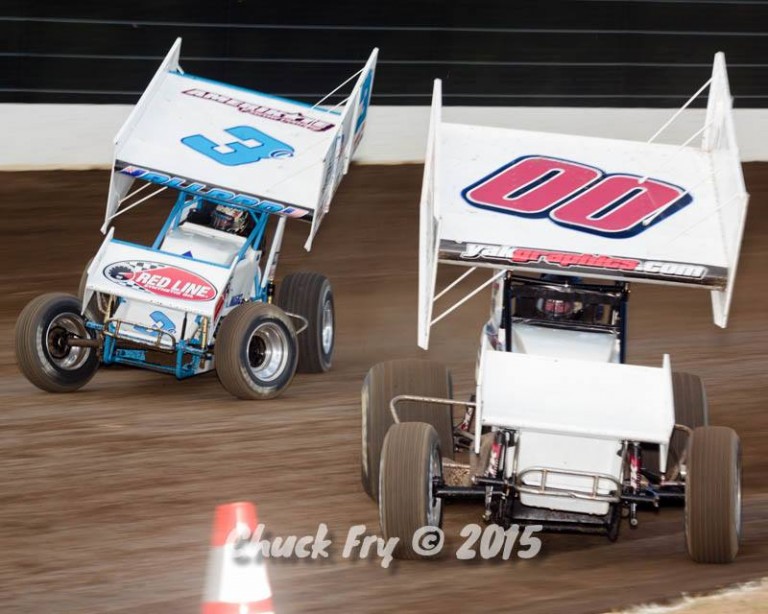