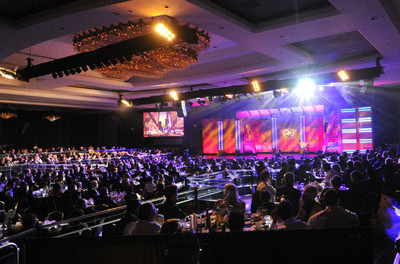 NHRA also announced that the entire NHRA Mello Yello Awards Ceremony will be available for viewing via NHRA’s YouTube channel starting Wednesday, Nov. 18, after 6 p.m. ET/3 p.m. PT. It marks the seventh year that the full event will be available to fans via the Internet.

OHM Nightclub, also at the Hollywood & Highland Center, will play host to the after party. Overlooking iconic Hollywood Boulevard, OHM Nightclub boasts one of the most innovative nightlife experiences in Hollywood. The venue features the main club with cutting-edge special effects and lighting on moving trusses as well as 150,000 watts of sound and world-class mapping capability through a network of 160 synced LED panels in addition to a patio with an Asian garden décor and a separate bar overlooking Hollywood Boulevard and the famous El Capitan. The property also will play host to the Lucas Oil Drag Racing Series Awards Ceremony, scheduled earlier in the day.

A popular tourist area, Hollywood & Highland is a one-of-a-kind high-profile venue that combines the best in retail, fine dining, and unique entertainment venues with the vibrant world of Hollywood. The center includes more than 60 retailers, nine of L.A.’s finest restaurants, and Lucky Strike Lanes, a high-tech and trendy bowling alley.

The invitation-only black-tie affair, where NHRA will crown its Mello Yello Drag Racing Series world champions in all four categories, will feature a pre-event cocktail reception at 5 p.m. A formal sit-down banquet will follow with cuisine provided by renowned Wolfgang Puck Catering. The official after party at OHM Nightclub will end the evening’s festivities.

The Loews Hotel & Resort will again be the host hotel for the NHRA Mello Yello Awards Ceremony. Featuring 628 rooms, including luxury suites, the venue is right in the heart of one of the most-visited tourist attractions in the Los Angeles area. The Ray Dolby Ballroom, on the fifth level of the center, is operated by famous chef and restaurateur Wolfgang Puck. The popular venue draws A-list events, parties, and conventions. Most notably, it is the site of the exclusive Governors Ball, following the Academy Awards ceremony each year.