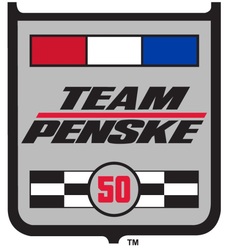 MOORESVILLE, NC (January 4, 2016) – Team Penske unveiled its plans today for the year-long celebration of its 50th Anniversary in motorsports during 2016. The team will wave the green flag on the commemorative activities by displaying an exhibit at the NASCAR Hall of Fame in Charlotte, NC in January. “Celebrating the 50th Anniversary of Team Penske” will be a multi-faceted program that will reach into retail and merchandise, media and fan engagement, sponsor partnerships and special events. Team Penske’s Media Tour at the NASCAR Hall of Fame on January 20 and an employee and partner celebration featuring current and past Team Penske drivers that same evening will serve as the official start of the historic year.

The January 20th date will coincide with the debut of an exhibit at the NASCAR Hall of Fame dedicated to celebrating the team’s history. The special exhibit will not only focus on Team Penske’s successful NASCAR program, but will showcase cars spanning multiple racing disciplines from 1966 to the present and will include never before seen artifacts and trophies from the Team Penske archives. An additional exhibit focused on Team Penske will debut in February at the Indianapolis Motor Speedway Hall of Fame Museum 100 days before the 100th running of the Indianapolis 500 in May. That display will not only feature cars representing each Team Penske driver’s first win at the speedway, but will also include vehicles, artifacts and trophies from Penske’s rich 50-year history.

The team will also announce the inaugural inductions into the Team Penske Hall of Fame, a yearly-honor that will be made eligible to current and former drivers and employees who have made a significant impact on the team and its history.

“We are very proud of all Team Penske has accomplished over the last 50 years. The celebration of our 50th anniversary is truly a credit to the hard work, preparation and execution of our teams over the years,” said Roger Penske. “The 2016 season will be a special one in our history as we have the opportunity to reflect back on our heritage while continuing to produce and win at a high level each week on the race track.”

Beginning as Roger Penske Racing in 1966, competing in sports car and endurance events, Team Penske has grown into one of the most successful racing teams – and sports teams – in the world. The team won its class in the 24 Hours of Daytona in its first start and since then Team Penske has produced a combined 424 wins, 487 pole positions and 28 national championships. Those totals include a historic 16 Indianapolis 500 victories, two Daytona 500 wins and the distinction of being the last American constructor to win a Formula One race, coming in 1976 with driver John Watson.

An extensive media plan will be implemented in 2016 and will bring many of the historic races, drivers, team members and pivotal moments of Team Penske’s past back to the forefront through interviews and features that will target broadcast, print and online media. Already, more than 70 in-depth interviews with current and former drivers, employees, sponsors and other influencers in motorsports have been collected and will be distributed throughout the year.

Team Penske will celebrate the 50th Anniversary all year long on its social media channels as well, utilizing the #Penske50 hashtag. Over the course of the season, Team Penske will feature current and former driver biographies, historic photographs and videos and will closely examine some of the events that have shaped the team over the years. Team Penske will also partner with Ford and Shell to crown “Team Penske’s Ultimate Fan” in a sweepstakes that will award some unique prizing. Details on the contest will be announced in the coming days.

Current partners will incorporate the newly-created Team Penske 50th anniversary logo and team history into point of sale and advertising throughout the 2016 season. Many Team Penske sponsors have been a crucial part of the success of the organization and several partners have been associated with the team for 25 years or longer. To further enhance the celebration, many partners will incorporate special paint schemes to be displayed at both NASCAR and INDYCAR events throughout the coming season.

A special line of 50th Anniversary merchandise will also debut early in the year, including exclusive Puma apparel, collectibles, novelties and diecasts.

A special Team Penske “Fan Day” will help fans share in all of the 50th anniversary excitement at the team’s headquarters on May 19. While specific plans for the family-friendly event will be unveiled in the near future, Fan Day will feature current and past Team Penske drivers, live entertainment, local food trucks, partner displays, interactive areas and special giveaways.

Team Penske is one of the most successful teams in the history of professional sports and is celebrating its 50th Anniversary during the 2016 season. Dating back to its first race in the 1966 24 Hours of Daytona, cars owned and prepared by Team Penske have produced more than 420 major race wins, over 480 pole positions and 28 National Championships across open-wheel, stock car and sports car racing competition. In its storied history, the team has also earned 16 Indianapolis 500 victories, two Daytona 500 Championships, overall victories in the 24 Hours of Daytona and the 12 Hours of Sebring and a Formula One win. Over 80 drivers have raced for Team Penske over the years. For more information about Team Penske, please visit www.teampenske.com.