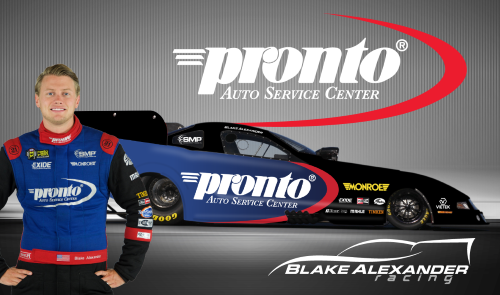 SPRINGFIELD, Ill. (January 24, 2019) – Pronto Auto Service Center driver Blake Alexander will return to Funny Car for the 2019 NHRA Mello Yello Drag Racing Series season. The two-time Top Fuel event winner will own and operate his equipment out of Tim Wilkerson Racing in Springfield, Ill., in a working partnership. Alexander will field his team at 12 races with crew chief Daniel Wilkerson.

“I am thankful to be in this position and have so many people that have helped me along the way,” Alexander said. “This has been a lifelong dream and taking this huge step will be stabilized with Daniel and Tim’s expertise. We will hit the ground running at Phoenix and are excited to continue building on the success of the Pronto Nitro Club promotion. The Funny Car class is stacked with talent and I am excited to get back into the fold.”

“We are excited to continue our partnership with Blake Alexander Racing and our vendor partners who have supported us to provide the Nitro Club promotion to Pronto members and their customers nationwide,” said Robert Roos, Vice President of Sales and Marketing, National Pronto Association.“The 2018 season was a great one and we have been working hard to continue providing a valuable program for Pronto membership in 2019.”

Alexander, who has been one NHRA’s youngest competitors in Top Fuel and Funny Car since he made his professional debut in 2011, will now establish himself as NHRA’s youngest team owner in 2019. Alexander and Daniel Wilkerson are both 30, leading a team of similarly aged crew members with experience in the nitro ranks.

“I’m excited for the opportunity to race with Blake and our strong crew in 2019,” Dan Wilkerson said. “Many friends that are former crew guys from my dad’s team will be assisting us at our 12 events. Pronto and their local members give us everything it takes to be competitive in the loaded Funny Car field and I’m looking forward to getting started in Phoenix.”

ABOUT BLAKE ALEXANDER
Blake Alexander is a third-generation NHRA drag racer, born in Glendora, Calif., raised in Roanoke, Virginia, and now residing in Charlotte, N.C. Alexander is currently the youngest NHRA team owner. As a driver, Alexander is the youngest to have his license in both Top Fuel and Funny Car. His primary role is to create marketing campaigns for his sponsors, centered around Professional NHRA drag racing.