POMONA, Calif. (Febuary 4, 2019) — J.R. Todd achieved a lifelong dream in 2018 by winning his first NHRA Mello Yello Drag Racing Series world championship. But after claiming the Funny Car world title, Todd is hardly content and the first taste of championship glory has only pushed him further heading into the 2019 season in his 10,000-horsepower DHL Toyota Camry.

The major goal is to try and become the first repeat champion in the class since John Force finished off his stretch of seven straight in 2002, but Todd knows plenty of work remains before that can become a possibility. The first step in that process starts at this weekend’s annual iconic opener at Auto Club Raceway at Pomona, the tradition-rich 59th annual Lucas Oil NHRA Winternationals presented by ProtectTheHarvest.com, where Todd will try to become just the fourth driver to win the event in both Top Fuel and Funny Car.

“Now that we’ve proven ourselves and won a championship, we definitely want to do it again,” said Todd, who won six races a year ago. “The goal is to see how many times you can do it. We know it’s not going to be easy, but we’re up for the challenge. More than anything, I want to try to enjoy all the moments. Talking to other guys in the sports, it’s about enjoying every bit of it. Time flies for sure but at the same time I’m focused on doing my job and making myself a better driver.”

Doug Kalitta (Top Fuel), Matt Hagan (Funny Car) and Bo Butner (Pro Stock) were last year’s winners of a race that will be televised on Fox Sports 1 (FS1), including finals coverage beginning at 5 p.m. on Sunday, Feb. 10. It is the first of 24 events during the 2019 NHRA season and Todd enters the weekend with plenty of momentum after winning the final two races of 2018 to claim the championship and then putting in a strong performance at last weekend’s preseason testing.

Todd put together an impressive run of 3.868 at 324.36 mph in Phoenix, adding a number of strong runs during the test session. Todd took that as a sign that his team, led by crew chief Jon Oberhofer and co-crew chief Todd Smith, made improvements in the off-season. Entering just his third season in Funny Car, Todd, who has 17 career wins, is eager to keep improving as a driver as well, something he hopes will be evident throughout 2019.

“Of course there’s more attention on us now after winning a title, but I’m not going to change my approach and the team isn’t going to,” Todd said. “We’ve got to focus on what we’ve always done and that’s make good runs and put ourselves in position to win. I’m still learning the ins and outs of these things, but more than anything it’s trying to be more consistent with my reaction times.”

There’s no room for let-up in a loaded Funny Car class that includes a host of championship-caliber talent like 2017 world champ Robert Hight, Ron Capps, who won in 2016, 16-time world champ John Force and former world champions Jack Beckman, Matt Hagan and Cruz Pedregon. But it’s those top-flight challenges that Todd has always enjoyed taking on and doing it at iconic tracks like Auto Club Raceway at Pomona makes it even more enjoyable. He closed out his 2018 with a win and a world title at the track, and he would love to start 2019 in winning fashion. 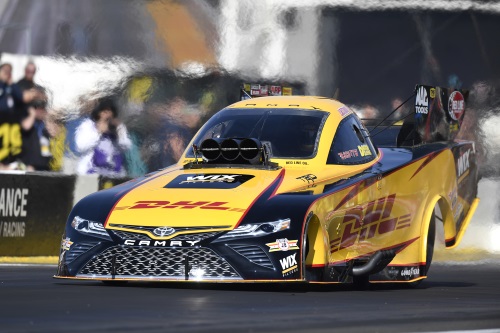 “Southern California just has a cool feel to it,” said Todd, who won the race in Top Fuel in 2007. “There’s a different type of excitement there and we’re excited to start the year. It’s one of my favorite races and it always draws a big crowd. I’m excited to get back there. We ran well there in November and the test session was encouraging, so hopefully we can repeat that. It’s going to be really cool racing there with the No. 1 on the side of the car.”

Doug Kalitta will try to win in Top Fuel for a second straight year to open the season, but he’ll have to get past reigning world champ Steve Torrence, who won the final six races of 2018. Others to watch include 2017 world champ Brittany Force, Antron Brown, Leah Pritchett and Clay Millican.

Bo Butner is after a repeat Winternationals win, but it won’t be easy for the 2017 world champion. He’ll face off with the likes of Jeg Coughlin Jr., who finished second in points last year, Jason Line, who has five event wins, Greg Anderson and Erica Enders.

The event also will feature thrilling competition in the NHRA Lucas Oil Drag Racing Series, where future stars of the sport hone their skills.

Those in attendance will also have the once-in-a-lifetime opportunity to interact with some of the biggest names in drag racing during the NHRA Legends Tour. This includes meet-and-greets, autograph sessions, and a variety of other activities.

WHERE: Auto Club Raceway at Pomona, Pomona, Calif. Track is located off I-10 at Fairplex Drive. Go north on Fairplex drive.

WHEN:
Thursday through Sunday, Feb. 7-10