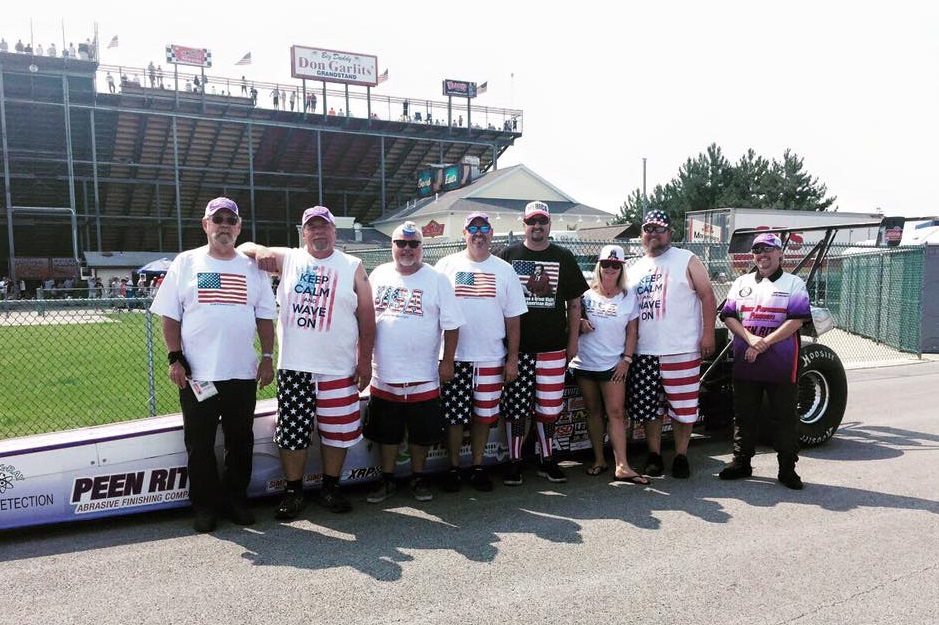 “It was awesome to see the size of the crowd and the general excitement of the fans at Norwalk, and what a great show the Bader family puts on. It was just so wonderful to be a part of that. I even told Mr. Bader when he presented me that ice cream scoop, ‘Don’t get me wrong; Wallys are great and I definitely need the points, but I came here for the ice cream scoop,’ and that’s what we left with. That was a very satisfying accomplishment,” said Demke, the defending Lucas Oil Series Top Alcohol Dragster world champion.

The weekend was off to a promising start on Friday when Demke shot to the top of the qualifying order with a 5.355/269 mph lap in the first session. A consistent 5.376 et followed in the second session, but the Peen Rite machine went up in smoke early in the third qualifying session, which also counted as the final round from the rained-out Chicago regional race. A/Fuel star Mia Tedesco ran a 5.317 to take the race win and No. 1 qualifying position.

“We feel our car has not been running to its full potential lately, and we’re struggling to figure out what was wrong. We only had two qualifying runs to try to figure it out. We knew the Dave Hirata-tuned A/Fueler of Mia Tedesco would run quick and we weren’t going to beat them with a mid-to-high five-thirty run. We hopped it up a little but didn’t expect it to smoke the tires. My hat’s off to them. They ran hard when they needed to and she deserves that win.”

The Jerry Maddern-owned blown alcohol dragster was back to its consistent mid-five-thirty performance when eliminations rolled around. Demke ran a 5.374 to take out class veteran Mike Kosky in the first round, then a weekend-best 5.344 et to shut down Randy Meyer’s 5.391. A 5.360 was enough to beat Brandon Booher’s 5.433 in the semifinals, lining up a final round pairing with Corey Michalek, one of the rising stars of Top Alcohol Dragster. Demke and Michalek were ready for each other on the tree with .022 and .019 lights, respectively, but the Dreher Motorsports A/Fueler of Michalek slowed while Demke powered through for a 5.357-to-5.478 victory.

“It was a challenging weekend. Our car wasn’t performing as well as expected but we were still quicker than a majority of the cars so we gave up on going faster and backed up into survival mode. After smoking the tires on Q3 we just wanted to get the car to the finish line consistently. Consistency is what won that race.

“The Dreher family is an awesome bunch of people and they had their car running consistently quick. I was watching Corey’s reaction times all weekend and they’re stellar. He certainly knows how to drive a drag car, and he got my attention. I honestly went into that final round knowing I had as good a chance to lose as I did to win. Knowing the reaction times that kid was pulling, I knew I had to dig deep to stay competitive. I knew there was a good chance I could lose that race on a holeshot,” Demke admitted.

Demke and the Maddern Racing team will have another shot at a big win this weekend when the NHRA Mello Yello Series rolls into Joliet, Ill. for the NHRA Route 66 Nationals at Route 66 Raceway, July 9-12. Because of his performance at LODRS regional events in the past year, Demke earned a spot in the eight-car JEGS Allstars race, where he’ll face some of the other top competitors from around the country.

“We’re going to be competing against the best of the best,” Demke said. “Our team takes this race very seriously. If you look at the sides of our trailer, the only stickers on it are our JEGS Allstars qualifiers stickers because we’re so proud every time we’re able to qualify and represent our division or region. On top of the Allstars, you still have the Route 66 Nationals. We won that race the last two years, so combined with last weekend’s win we have a lot of momentum coming into this weekend.”