He made six final round appearances in 2018 and won the prestigious U.S. Nationals. Even that may only provide passing excitement compared to the anticipation for what the 2019 season has in store for McMillen.

“Welcome to 2019,” McMillen said with a smile. “The odds were really stacked against us coming here and doing well. We built an in-house car, added four new crew members and didn’t get to test. We came here with the same motor that we ran in the NHRA Finals and had a great weekend. That’s nothing to hang our heads about.”

McMillen leaves Pomona third in points, his best start after the first of 24 races and that’s still not what excites McMillen.

“We got better every run,” McMillen said. “We’ve got a hotrod that can really compete this year,

McMillen reset his career best elapsed time and mile per hour in the opening round match-up against Richie Crampton with a 3.710 at 329.10mph. He then reset it again in round two against Leah Pritchett when he posted a 3.696 at 329.91mph. He made another impressive run in the hole shot loss to Doug Kalitta, posting a 3.706 to Doug’s 3.708. Kalitta’s margin of victory was just 0.0113 seconds.

“I didn’t think I had a bad light,” McMillen explained. “Doug just had a better one. He took out me, Billy and Steve (Torrence) on hole shots. Doug earned that victory today.”

“The car was happy all weekend,” McMillen added. “Rob (Wendland) did a great job on our chassis. Now he has something he can work with. It’s responding to the changes he’s making. The best part of it all – we’re not even leaning on the motor. There’s a lot more left in it. A few tweaks here and there and we’ll be even more consistent.”

“When is Phoenix?” McMillen asked with a grin.

Race two of the season is the NHRA Arizona Nationals, February 22-24. 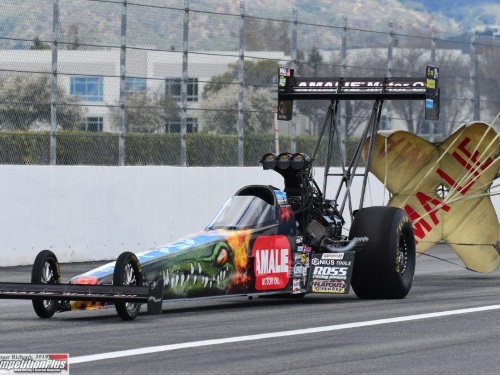