CHANDLER, Ariz. (February 24, 2019) – Team Summit made a series of powerful passes during qualifying for the Magic Dry Organic Absorbent NHRA Arizona Nationals, and on raceday the silver Summit Racing Chevrolet Camaro, driven by Jason Line, was again capable of standing out amongst the competition. The KB Racing team had a shorter day than planned, but that only means more time to prepare for the upcoming event at Gainesville Raceway. 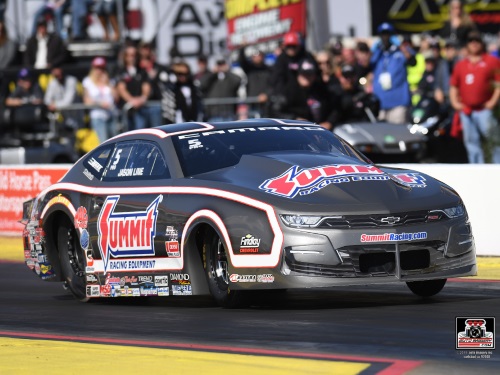 “The second round didn’t go as planned, obviously, but we’re still really happy with the silver Summit Racing Chevrolet Camaro,” said Line. “It’s already been a good car for us, and it’s getting better. There were challenges this weekend for us here, but the good news is that we can put those behind us and focus on the next race. We’ve got a lot of work to do before Gainesville, so it’s good that we’ve got a little bit of time to work on things.”

The challenges faced in Pomona by Greg Anderson, driver of the red Summit Racing Chevrolet Camaro, followed him to Phoenix. He looks to shake the bad luck quickly.

“We’ve had our share of bad breaks and stupid stuff, and hopefully we’ve gotten that all out of the way,” said Anderson, who shook the tires in the first round as Jeg Coughlin Jr. pulled away. “We will certainly be testing before Gainesville and making sure we have everything right. I’m just going to have to forget about the first two races, put them out of my mind, and better days will come.”

Position in standings following event: No. 2

Position in standings following event: No. 13

Position in standings following event: No. 1

Join the conversation by using #ArizonaNats on social media