Chandler, Ariz. (February 25, 2019) – Terry McMillen and his AMALIEⓇ Motor Oil XTERMIGATORⓇ Top Fuel team did it again. They reset both ends of their career best (3.695 at 330.96MPH) and qualified second for the Arizona Nationals.

For the second time in as many races, McMillen’s Rob Wendland led team improved on their performance and gave McMillen the best starting spot in his 222 NHRA race career. McMillen held the top spot in qualifying until the last session. Billy Torrence would top McMillen by just 0.028 seconds when he posted a 3.667 elapsed time in the final qualifying session.

In eliminations, McMillen would face the same opponents as the previous race, starting off with a win against Richie Crampton in the first round with a 3.726 elapsed time. He would fall to Leah Pritchett in round two as the car lost traction before the 330ft cone. Pritchett fell to Billy Torrence in the final round.

“We didn’t go as far as we would have liked today,” McMillen said. “Our program is really solid. The car is responding to Rob’s (Wendland) setup. So right now we’re pretty happy. It’s a long season. We’ve got to be able to do this week in and week out. We’ve got a lot of work ahead of us going into Gainesville. We’re excited as we’ve ever been to get there.”

McMillen hopes to better his finish from two years ago in Gainesville at the AMALIE Motor Oil NHRA Gatornationals where he appeared in his first final round and had a runner-up finish to Brittany Force.

“The AMALIE Motor Oil Gatornationals is a big race for us,” McMillen added. “Besides the fact that this our sponsors race, this is always a big race. It’s the east coast opener, it’s the 50th anniversary of the race, there’s going to be a lot going on. I can’t wait to get there.” 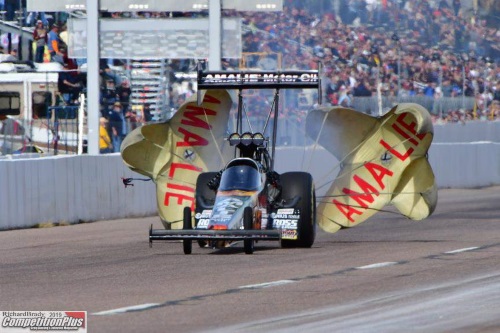