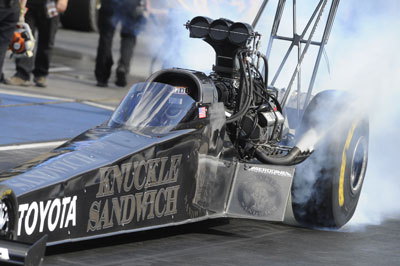 But sitting in eighth place in the loaded Top Fuel class, Langdon knows that putting together a series of strong outings can only help his chances at qualifying for the playoffs and making a run at a second world championship.

That means starting to build momentum at scenic Sonoma Raceway, one of Langdon’s favorite tracks on the NHRA circuit, the site of this weekend’s 28th annual NHRA Sonoma Nationals.

“You definitely have to have momentum heading into the Countdown,” Langdon said. “We haven’t been able to test a lot, and we’re basically testing at the races. There’s not as much consistency as we would have liked, and that’s been our weak point. We’ve got to get more data, and I think the momentum will follow. We’ve changed a lot of stuff, and we’re trying to do the best we can. With all that we’ve been through, it makes for a good story if we could win some races.”

Khalid alBalooshi (Top Fuel), Courtney Force (Funny Car), Jason Line (Pro Stock), and Eddie Krawiec (Pro Stock Motorcycle) are the defending winners of the event, which will be televised by ESPN2. It is the 15th of 24 events during the 2015 NHRA Mello Yello Drag Racing Series season and second of three stops on the NHRA’s legendary Western Swing.

It’s also an important stop for Langdon in that only three events follow it before the start of the Countdown to the Championship. That means that getting everything lined up for a championship run starts now, and Langdon knows that his 10,000-horsepower Knuckle Sandwich/Toyota dragster needs to get back to the high-level performance that led to a season-opening win in Pomona.

The team followed that effort at the season opener with back-to-back semifinal appearances, but Langdon hasn’t been out of the second round since. He hopes that all changes this weekend in Sonoma, where Langdon believes the team is ready to turn things around.

“We’re really close,” said Langdon, who has 10 victories. “We really started out great, and we’re trying to find our way back. There are just some different things we’re trying to address and fix, but we’re not going to hang our heads. We know how to win, we’ve got a great team, and I’m confident we’ll get it figured out.”

That Langdon and his team, led by team owner Alan Johnson and crew chief Brian Husen, are in contention is an impressive feat in itself. The team’s expected main sponsor pulled its sponsorship right before the start of the 2015 season, putting everyone on the team in scramble mode.

Langdon credited Toyota and Alan Johnson Racing for keeping the team intact this far into the season, also making Langdon gain new perspective on the opportunity to race in Top Fuel.

“At the end of the day, you have to look at the big picture,” Langdon said. “We’re very lucky to do what we do, and we’re fortunate to have this team. It all could have ended after Gainesville. We’re lucky to have jobs, and I’m just extremely thankful to have such great support from Toyota and Alan Johnson Racing. It’s been a humbling experience, and I easily could have been on the sidelines if not for Toyota and Alan.”

But now that he’s racing, Langdon wants to perform at a high level and contend for another championship. He also has his eye on a strong showing at Sonoma Raceway, a track where Alan Johnson Racing has thrived in recent years. The team has won three of the past five races at the track, including Langdon’s victory in 2013. Langdon, who was the runner-up in Sonoma a year ago, also swept the California races in 2013, winning twice in Pomona as well as Sonoma.

“Sonoma probably for me is my favorite track on the tour,” Langdon said. “I’ve always enjoyed going there, and it’s just a fast, neat track. The crew guys and everyone will get to spend some good time together, and we’ll just hang out away from the track before we get ready to race.”

In Funny Car, the youngest Force daughter has struggled in 2015, losing in the first round seven times and sitting outside of the top 10 in the points. Courtney needs a strong weekend as she works to defend her title to get her Traxxas Chevy Camaro back on the playoff track. Other contenders in Funny Car include seven-time Sonoma winner John Force, four-time winner Ron Capps, defending world champ and points leader Matt Hagan, Jack Beckman, who won last weekend in Denver to move to second in points, Robert Hight, Cruz Pedregon, Tommy Johnson Jr., Tim Wilkerson, Alexis DeJoria, and Del Worsham.

Line’s win over V. Gaines last season set the stage for an epic Pro Stock championship rivalry between the two-time world champ and Enders, who claimed her first world title last season. Line will be looking to tie teammate Greg Anderson, who has four wins and the points lead in 2015, for the most Pro Stock wins in Sonoma with four. Enders, 2012 world champ Allen Johnson, Denver winner Larry Morgan, Chris McGaha, and Drew Skillman all figure to be drivers to watch in the 200-mph factory hot rod category.

The Pro Stock Motorcycle world championship one year ago came down to Krawiec, who posted his first win of the 2015 season in Denver, and eventual world champ and teammate Andrew Hines. Hines, perennial contender and 2013 race winner Hector Arana Jr., who won in Chicago, Englishtown winner Jerry Savoie, two-time season winner Karen Stoffer, Matt Smith, and Hector Arana Sr. are all among the pre-race favorites in the two-wheel class in Sonoma.