Pensacola, FL (March 10, 2019) – After a short night in the season opener at Daytona, Michael Self (No. 25 Sinclair Lubricants Toyota) rebounded in the second race of the ARCA Menards Series season with a dominant win in the ARCA Pensacola 200 presented by Inspectra Thermal Solutions at Five Flags Speedway.

Self led 39 laps midway through the race and retook the lead from Kaden Honeycutt (No. 38 Kaden Honeycutt Racing Ford) with 29 laps remaining to score his fourth career series win and his first ever series short track victory. 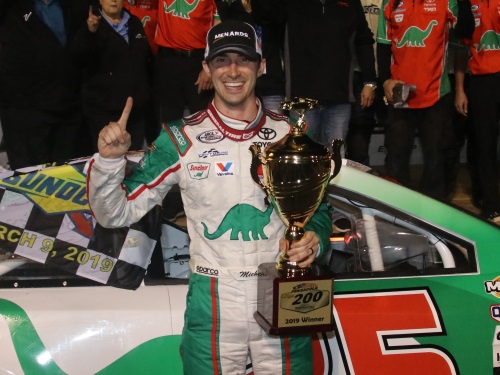 “This is a big deal for me,” Self said. “A short track in ARCA has eluded me. Even though I don’t think I am a great short track racer, I have had some success in the K&N Series on short tracks. For some reason is just hasn’t translated over here. Maybe this will kick start it.

“I had a lot of confidence in our car. The Venturini Motorsports team as a whole is really good. Whenever we go to one of these short tracks the rest of the year we should be in good shape. I wouldn’t want to be racing against them right now because I am not sure I would be able to beat them.”

Self finished ahead of Ty Gibbs (No. 18 Monster Energy/ORCA Coolers/Advance Auto Parts Toyota), who finished second in his ARCA Menards Series debut. He passed Christian Eckes (No. 15 JBL Audio Toyota) for the second position in the final turn of the final lap.

“I am really happy with finishing second in my first race, but I really think we had the car to beat,” Gibbs said. “I let the car roll off the jack a little on the last stop and it cost us a little time on pit road. I think that cost us the race, but we learned a lot and I am ready to get to the next race at Salem.”

Eckes held on for third, albeit with damage to the nose of his racecar.

“It happened early in the race and I didn’t think it really effected the way the car ran then, but looking at it now I am not so sure,” Eckes said. “It would have been nice to hold Ty off for second but we’ll take third. I think we come out of here with the points lead so it’s a great night for the Venturini team.”

Chandler Smith (No. 20 Craftsman/828 Logistics Toyota) led the first 38 laps after starting from the General Tire Pole. He crossed the line in fourth, just in front of Corey Heim (No. 22 Speedway Children’s Charities Ford) who finished fifth in his series debut.

The race was only slowed twice by caution flags, each for debris. The race took just one hour, 12 minutes, and 23 seconds and was completed at an average speed of 82.802 miles per hour, a record pace for a 200-lap race at Five Flags. The previous record, 75.205 miles per hour, was set by Gary Bradberry in 1994.

Self’s official margin of victory was 1.506 seconds over Gibbs.

The next race for the ARCA Menards Series is the Kentuckiana Ford Dealers ARCA 200 at Salem Speedway on April 14. The race will be televised live on MAVTV starting at 2 pm Eastern. ARCARacing.com will have free live timing & scoring, track updates, and user chat for ARCA for Me members; new members can register at ARCARacing.com/login.