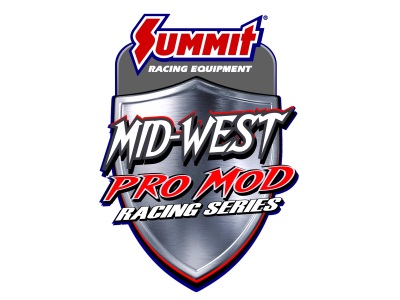 “It isn’t often that you have such an extraordinary season opener anywhere in drag racing, but I feel like that is exactly what we managed to have in Ennis. Frankie snagged the Pro Mod class win, along with Shane Heckel in X275, Wynette Hudgins in Top Dragster, & Earl Folse in Top Sportsman. The effort that the drivers, crew, MWPMS staff, and the fans put in to the event was all top notch,” stated series Founder Keith Haney.

The season opener in Ennis was set to contest four of the five MWPMS classes, and the action in all four was outstanding. This was also the first time during the regular season that both Top Sportsman and Top Dragster were going to be contested at a Mid-West Pro Mod Series event. Both of those classes showed up in full force, even though it is only March. In Pro Mod, some of the best drivers in the world came through the gates, with 17 cars on the property. And in X275 it was going to be two World Champions fighting it out in the final like a heavyweight boxing match.

With 17 cars on the property for pro mod, there was certain to be a bump spot, and wouldn’t you know, it came down to the final qualifier to set the field. There were a lot of interesting matchups, but there were also some amazing accomplishments. Series Founder Keith Haney was one of the most consistent drivers all weekend and made it to the semifinals before getting bounced by Justin Jones. 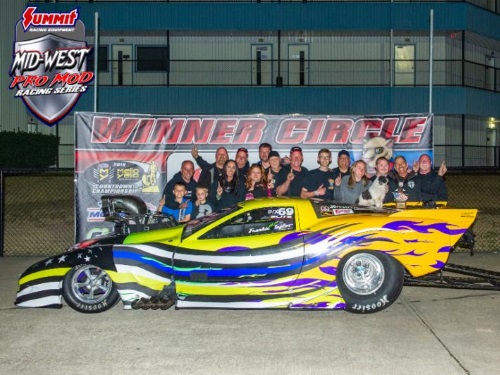 Frankie Taylor, who if you are a pro mod fan, you know is an absolute legend in the sport of drag racing, managed to take his Larry Jeffers (LJRC) built Vette to the Winner Circle, but not before having to get through some seriously tough competition. Taylor had to get past Travis Brandt, Eddie Rogers, and number one qualifier Aaron Wells before getting a chance to square up on Justin Jones. Justin would defeat Cunningham, Sackuvich, and Haney on his way to the finals in the Imperial Construction back Corvette. Frankie was not going to be denied though as he took the victory over Justin in the finals running a stout 3.709 at 202.55 to Justin’s 4.297 at only 140.09.

“Today was a huge victory for us. Not only because of the win itself, but because of the special meaning the day has to us. This victory was for Paul Jr.” stated Frankie. 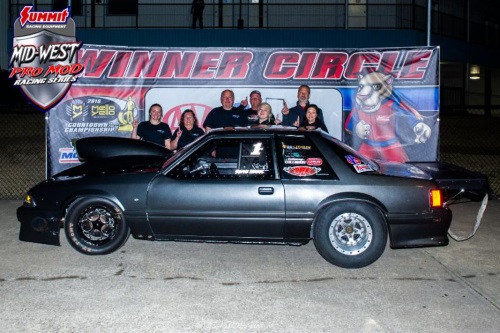 In the world of small tire racing, it was X275 that took the main stage at Ennis. Names like Heckel, Hubbard, Kato, and Campbell were just some of those in attendance. Everyone seemed to be running personal bests and big numbers. Kenny Hubbard, who is the two-time MWPMS X275 World Champion sat at #1 with a 4.36 and a whopping 167 mph. So, it was no surprise to see him make his way to the finals. In the finals it was another Texas based heavyweight Shane Heckel. Shane is the reigning John Sears X275 World Champion. What we had was an Ali vs. Frazier final round. It was Shane that grabbed the victory with a 4.379 at 155.38 to Kenny’s uncharacteristically late 4.384 at 167. This was a great session for both drivers as they get ready to make an assault on the MWPMS X275 Championship. 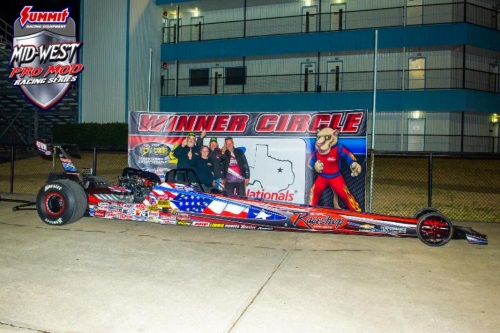 Our two newest classes are Top Sportsman and Top Dragster. Both are littered with some of the biggest sportsman names in drag racing today. When it comes to the Race Star Wheels Top Dragster Class, there were thirteen rails on the property, vying to become the first ever Mid-West Pro Mod Series Top Dragster class winner. When everything was said and done though it was Wynette Hudgins that took the victory over a hard charging David Johns. Wynette went a 3.885 on a 3.85 with a .008 light, while David went dead on 4.137 on a 4.13, but had a .074 light. 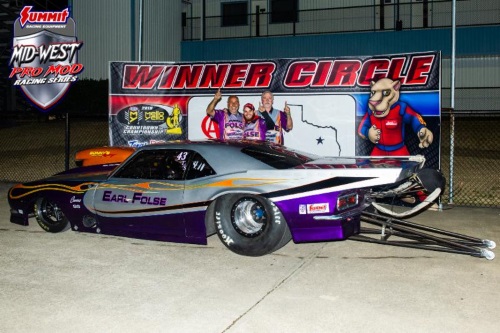 Top Sportsman was headed up by the Texas transplant Mick Snyder and his beautiful Camaro. Mick, who was short some crew over the weekend, relied solely on his much better half Lindsey Snyder to take care of all the crew duties. Mick was eliminated in the second round to Lance Abbott and left the door wide open for the rest of the field. In the semifinals it was Earl Folse and Lance Abbott squaring off, while Top Sportsman Legend Bob Gulitti had a bye to the finals. Earl defeated Lance when Lance went red. In the finals Earl laid down a 4.170 on a 4.11 (.016 tree) to Bob’s 4.073 on a 4.00 (.020 tree) and took the victory over Bob. 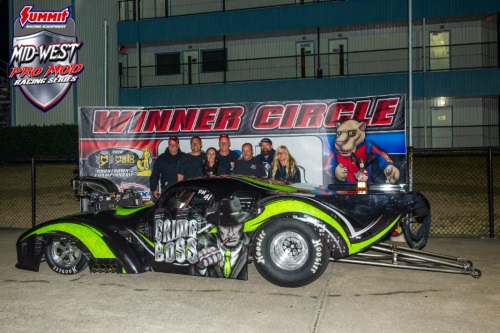 Wrapping everything up was Ej Hickl and ’41 Willys. This car was so beautiful it could have taken home first place in most any car show. They were getting their first passes on the car and managed to go to the finals in the Slammers Class. Even though earlier in the week the team destroyed a driveshaft, they managed to get it together and take the win when Jon Stouffer was unable to make it back for the finals due to a huge top-end blower explosion during his semifinal round.

We look forward to seeing everyone at the next stop on the Summit Racing Equipment Mid-West Pro Mod Series tour. Next up is Bowling Green, KY as part of the Outlaw Street Car Reunion, where we are expecting one of the biggest MWPMS turnouts in the history of the series. Come see the excitement April 11th-13th at Beech Bend Raceway Park in beautiful Bowling Green Kentucky. Visit www.raceoscr.com and www.midwestpromodseries.com for rules and details.

Mid-West Pro Mod series was founded in 2017 by Pro Mod and Radial class racer Keith Haney. Keith is also the co-owner of Tulsa Raceway Park in Tulsa, Oklahoma. A series created for the racers by a racer to fill a void in the Midwest region when it came to pro mod and radial racing. The continued mission of the MWPMS is to put on a superior family show for the fans and racers, along with providing a great place for people to come and race. Mid-West Pro Mod Series started as three classes: Pro Mod, RvW, and X275. Due to Keith’s strong roots in Top Sportsman. MWPMS will showcase 9 events throughout the 2019 racing season. The series will also conclude November 7-9 following the Second Annual “Elite 16” All Star event. All races will be streamed live online via Bangshift.com allowing for maximum exposure for our MWPM series racers as well as Summit Racing Equipment. The recent addition of Top Sportsman and Top Dragster classes will add extra excitement to the 2019 season.