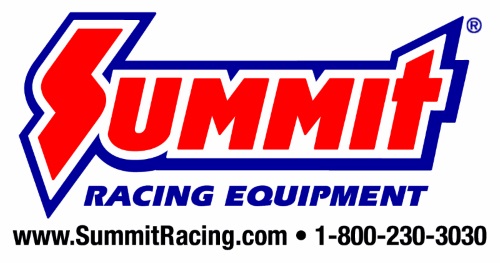 “This is something that we at the Mid-West Pro Mod Series have been working towards since our inception, and this announcement is a culmination of that vision. Summit Racing Equipment has shown overwhelming support of our racers and series, and this is another way they are able to show their appreciation for those that participate in the MWPMS”, stated series Founder Keith Haney.

Here are the details regarding the contingency that Summit Racing Equipment is putting up for the MWPMS racers in 2019.

Racers that display one of the Summit Racing tire covers and a pair of contingency decals displayed on their race car at the time of their Win or Runner-Up finish will be eligible to receive a contingency check from Summit Racing Equipment.

Important: All racers that win or runner-up and claim Summit Racing contingency must submit a W-9 for their accounting departments records. W-9’s only need to be submitted one time. Once they are added to their records the racer does not need to send any further copies. Racers are welcome to send their W-9’s directly to the attention of Don Lower (Contact Information Below) either by email or fax if that would help.

Below is the Summit Racing contingency payout listing for the 2019 MWPMS season.

Don Lower, Motorsports and Contingency Coordinator went on to state “We look forward to a great year with the Mid-West Pro Mod Series and wish everyone the best of luck this season.” MWPMS will showcase 9 events throughout the 2019 racing season, beginning March 8-9 at the famed Texas Motorplex in Dallas, Texas. The series will also conclude at the same facility November 7-9 following the Second Annual “Elite 16” All Star event. All races will be streamed live online via Bangshift.com allowing for maximum exposure for our MWPM series racers as well as Summit Racing Equipment. The recent addition of Top Sportsman and Top Dragster classes will add extra excitement to the 2019 season.

About the Summit Racing Equipment Mid-West Pro Mod Series
Mid-West Pro Mod series was founded in 2017 by Pro Mod and Radial class racer Keith Haney. Keith is also the co-owner of Tulsa Raceway Park in Tulsa, Oklahoma. A series created for the racers by a racer to fill a void in the Midwest region when it came to pro mod and radial racing. The continued mission of the MWPMS is to put on a superior family show for the fans and racers, along with providing a great place for people to come and race. Mid-West Pro Mod Series started as three classes: Pro Mod, RvW, and X275. Due to Keith’s strong roots in Top Sportsman, MWPMS will expand to five classes in 2019 with the addition of Top Sportsman and Top Dragster. The series is contested eight times a year throughout the Midwest, as well as a one-off end of the year blowout called the Elite 16.