GAINESVILLE, Fla. (March 14, 2019) — After a productive off season, the J&A Service Team looks to capitalize early on 2019 Pro Mod championship.

“It’s been a busy off season,” Whiteley says. “We’ve made some personnel additions that we believe are going to transition into on-track success. We have not had a consistent group of guys for the past year or so. At this point we have a solid group, not only on my team, but my dad’s (Pro Mod driver Jim Whiteley) team too. We have been testing a decent amount, and I’m excited to start the season. The momentum we have, as well as the overall atmosphere, is what I’ve been searching for.”

Whiteley contributes this atmospheric change to the loyalty of his veteran crew members, Jim Robbins and Crew Chief Jeff Perley.

“The glue to our team is the guys who have been with me since day one. I will always be thankful and appreciative for them.” 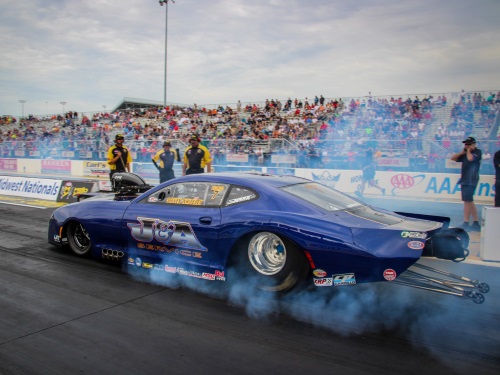 Steven Whiteley and the J&A Service ZL1 Camaro during the 2018 Midwest Nationals.

During the 2018 season, the J&A Service team premiered a new 2018 ZL1 Chevrolet Camaro. After a season of struggles working through the growing pains that come along with running a new body, Whiteley is assured of success in 2019.

“We made some big changes in the off season. In pro mod class, it is important to continually evolve your program to remain competitive. We have a great group of guys that are willing to work and put in the hours to achieve the desired results. We have a good thing going right now.”

Steven Whiteley will race alongside his Father, national event series champion Jim Whiteley in the highly competitive Pro Mod class this weekend. With a confirmed 29 entries, qualifying of the E3 Spark Plugs NHRA Pro Mod Series begins Friday March 15 at 12:30 p.m. and 4:00 p.m., and Saturday at 11:15 a.m. and 2:50 p.m. Round 1 of eliminations begins at 12:35 p.m. Sunday. All times listed are in Eastern Standard Time and are subject to change.

For all of the latest news regarding Steven Whiteley check out: