GAINESVILLE, Florida (March 15, 2019) – Don Schumacher Racing Senior Vice President Mike Lewis was welcomed into the International Drag Racing Hall of Fame Thursday evening in Gainesville, Fla. ahead of the 50th annual NHRA Gatornationals. Lewis was recognized by The Don Garlits Museum of Drag Racing for his expansive and tenured career in the sport of which he is so passionate.

“Don Garlits had attended our DSR Open House last September and volunteered to sign autographs with all of our drivers and I ended up taking him to dinner on that Sunday night,” said Lewis as he fondly recalled the moment when he was informed he would be inducted into the 2019 class. “He called me shortly after and I just thought he was calling to say thank you for dinner and instead he informed me of the nomination.

“To get a call from Don Garlits and learn that I was going to be inducted into the Hall of Fame was beyond imagination. Of course, I’ve had a lot of time to think about it since then and every night I’d kind of close my eyes and rehearse what I was going to say but really, it didn’t fully sink in until last night.” 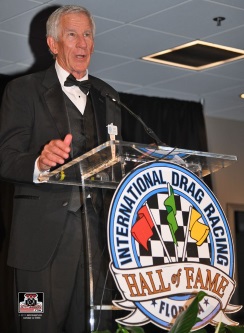 DSR Senior VP Mike Lewis was inducted into the International Drag Racing Hall of Fame on Thursday in Gainesville, Fla.

The multitalented Lewis who has spent time behind the wheel of a Top Alcohol Dragster and Nostalgia Funny Car in addition to his various management roles, has worn many hats throughout his illustrious career which spans nearly five decades. He is one of the most recognized faces in the industry and has been an integral part of the DSR fabric since 2002. Before joining the winningest team in NHRA history, Lewis owned and operated a consulting company. Previously, he served as Vice President and General Manager of Indianapolis Raceway Park, and Vice President of Field Operations for the NHRA. He is credited for the development of the NHRA’s popular Youth and Education Services (YES) department.

Racing is in Lewis’ DNA. Prior to joining the sport’s sanctioning body, he worked at his family’s motorsports facility, Maple Grove Raceway, where he rose through the ranks learning all aspects of track operation.

“It’s such an incredible honor, and I’m so grateful that I was able to share it with Don (Schumacher), Megan (Schumacher), all my friends, family and everyone at DSR. I’m truly speechless,” added Lewis. 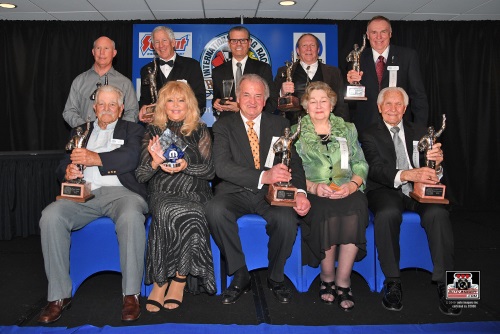 The International Drag Racing Hall of Fame’s class of 2019

ABOUT DON SCHUMACHER RACING
Don Schumacher Racing (DSR) is the winningest team in NHRA Drag Racing history, having claimed more than 326 NHRA national event titles and 17 world championships since opening its doors in 1998.