GAINESVILLE, Fla. (March 15, 2019) — Opening day of qualifying at the 50th anniversary Amalie Motor Oil NHRA Gatornationals at Gainesville Raceway saw NHRA two-time world champion Robert Hight in a familiar position, at the top of the Funny Car class with the provisional No. 1 spot. Sixteen-time world champion John Force is sitting in the sixth spot and, in Top Fuel, 2017 champ Brittany Force is holding the No. 3 spot with rookie Austin Prock in 11th.

The first session of qualifying was anything but foreshadowing for Funny Car points leader Robert Hight. Hight had to click off before reaching half-track for only a 5.809-second pass. With cooler temperatures thanks to a delay early in the first qualifying round, Hight and his Auto Club of Southern California team powered to a 3.928-second pass at 305.15 mph with a cylinder out to take over the No. 1 spot. Hight is chasing his third No. 1 at Gainesville Raceway and third consecutive of the season. 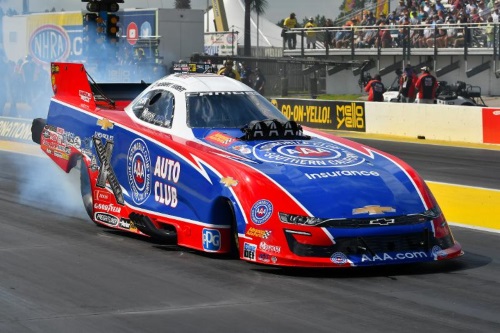 “First off, I don’t think that’s going to stay No. 1 with the forecast cooling down 10 degrees but honestly, I wouldn’t have thought when I made that run it would stay. At top end I said it’d be top five. I really thought somebody would run in the 80s and run better. I put a cylinder out down there and shut it off because it sounded horrible. Even with a cylinder out, if I would have stayed with it, I’d probably still be in the 90s,” said Hight. “The conditions will be better tomorrow and we want to put a show on for these fans. It was a packed house today on a Friday and you know what? It’s going to be like that tomorrow and Sunday. It’s exciting so we want to put a good show on and hopefully you know, Jimmy (Prock) and Chris Cunningham, they’re going to push every single run and it wouldn’t surprise me if tomorrow we see a run of .85. That’s my prediction right now.” 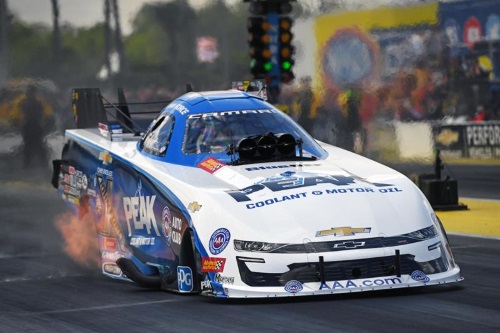 With a semifinal finish and No. 13 qualifier at the season opening Winternationals in Pomona, Calif. and a second-round exit and No. 8 qualifier at the Arizona Nationals, John Force started the Gatornationals running at 4.040-second pass at 313.66 mph in his PEAK Coolant and Motor Oil Chevrolet Camaro SS Funny Car. Coming out for his second pass of the day in the No. 2 spot, the eight-time Gatornationals winner only improved his efforts laying down a 3.995-second pass at 314.68 mph but the track conditions and weather made for an even more competitive field as the legend finds himself in the No. 6 spot.

“We’re getting from A to B, which is what it’s all about. Corradi and Danny Hood and my team, we’re starting to get to know each other and it’s showing, just have to make sure it continues. Racing out here at the 50th Gatornationals in front of the legends, my heroes, we’re doing good. Robert with Auto Club is fast and Brittany with Advance is getting it done, Grubnic and Savage, they’re getting it figured out and the Prock kid with Montana Brand is right there.” 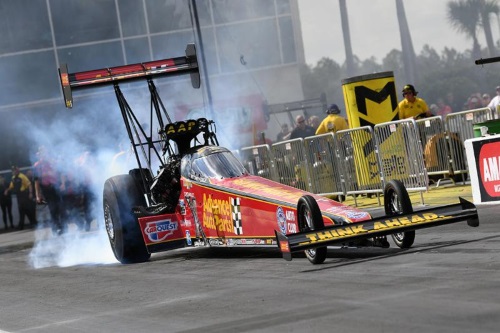 Brittany Force, who earned her first career win at Gainesville Raceway in 2016, ran a 3.908-second pass at 320.84 mph during the first qualifying session. The Advance Auto Parts team followed up the solid first pass with a 3.800 at 323.81. The consistency is more than welcome for Force and her team, headed by David Grubnic and Mac Savage, who have been transitioning from Alan John Racing parts to John Force Racing parts.

“We turned things around today. We stayed after in Phoenix and made four testing runs on Monday and it seemed to show,” Force said. “We’ve made two good runs so far, a 3.908 and stepped it up to a 3.800 on the last run. In the No. 3 spot but we’re looking to improve and do more tomorrow. The conditions will be better and cooler and we want to definitely step this thing up.” 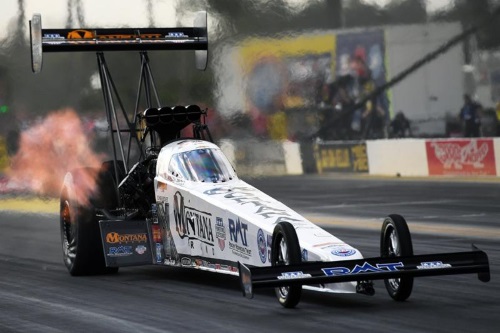 Austin Prock made his east coast debut at the 50th anniversary Gatornationals with a 4.592-second pass at 171.16 mph in the first session of qualifying after smoking the tires and having to shut off early. Coming into the second session however, Prock and his Montana Brand / Rocky Mountain Twist team improved their performance to run a 3.859-second pass at 322.27 mph putting them in the No. 11 spot as they head into Saturday. The second session run has the Rookie of the Year candidate optimistic heading into day two of qualifying.

“We’re out here in Gainesville and it’s a big race, everybody wants to win it. Especially us. We’re hungry out here and we’re getting this Montana Brand / Rocky Mountain Twist Top Fuel dragster in shape,” Prock said. “This was our first time in hot conditions in this dragster, for myself as a driver and my crew chiefs and team. The first run just got away from us. We smoked the tires, tried hopping it up a little bit and conditions cooled down and the track was a little better, I just missed on the power. I think maybe we had a bad coil or something like that. I’ve been knocking the tree down this weekend so we’ll get this hot rod in shape and be bad to the bone on Sunday.”

Qualifying at the 50th Amalie Oil NHRA Gatornationals continues Saturday with two sessions at 1:00 and 4:00 p.m. Tune into FOX Sports 1 (FS1) at 9 p.m. ET for qualifying highlights. Sunday eliminations are slated for 11:00 a.m.