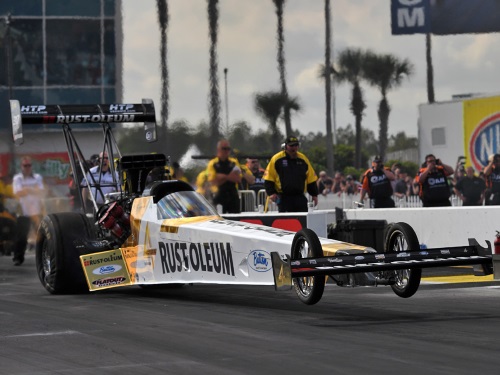 GAINESVILLE, Fla. (March 16, 2019) — After leaping to the top of the charts Friday night during qualifying for the 50th Annual Amalie Oil NHRA Gatornationals at Gainesville Raceway, TJ Zizzo laid down an even quicker pass Saturday. Unfortunately, great weather and 24 hours gave the field time to catch up to the Chicago native, who put down a career second-best ET of 3.753 seconds at 328.62 mph in Q4. The pass was still good enough for eighth on the ladder for Sunday’s eliminations.

“First pass…new tires, man,” Zizzo said. “New tire blues! We haven’t had to run new tires since Las Vegas in 2017 when we struggled a little bit with new tires. So we put a brand-new set of tires on and we smoked ‘em! Instantly. Car didn’t even move ten feet.”

Despite the issues, the decision was made to keep the new slicks. It was the right decision.

“But we decided to put those tires on again for the next pass and it was much better,” he said. “The car went out there and ran what it needed to, ran a 3.753, our second-best career pass, but it wasn’t satisfying. That’s the sad part! You look up there at the scoreboard, you see a 3.75 and it just ain’t enough. But it qualifies us eighth, at the top half of the field for like six races in a row or something, so that’s a positive.”

Zizzo faces Scott Palmer Sunday in the opening round of elimination. The versatile racer is a favorite competitor of Zizzo Racing, but TJ was quick to point out he remembers a pairing between the two last year.

“We’ve got Scott Palmer tomorrow and we love racing Scott Palmer,” Zizzo said. “He whipped our tail at Joliet and I certainly remember that.”

Eliminations for the 50th Annual Amalie Oil NHRA Gatornationals are scheduled to kick off Sunday at 11 a.m. 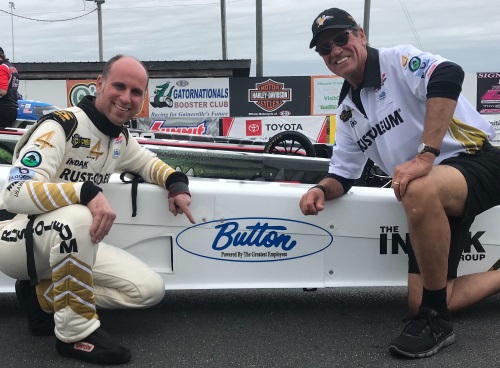 NEW SPONSOR FOR ZIZZO RACING: Last year during the annual SEMA show in Las Vegas, TJ and his dad (and Zizzo Racing owner) Tony Zizzo decided to take in a regional drag race at The Strip at Las Vegas Motor Speedway. Walking through the staging lanes during the Top Dragster quals, they met Bob Button.

“Some guy stops us and goes, ‘Hey, what are you guys doing here?’” TJ said. “My dad and I look at each other and we’re like ‘How do you even know who we are?’ He says ‘I watch you guys, I follow you guys, it’s really cool, you’ve got a cool story, you try really hard when you go out and you kick some ass!’”

After exchanging information, TJ was surprised to receive an email from Bob who said he wanted to help support Zizzo Racing for the 2019 NHRA Mello Yello Series season. Button said the partnership, incorporating his Dixon, Calif-based trucking company, Button Transportation, not only provides promotion for his family-owned business, but helps him in his quest to be a better drag racer.

“I’ve known about the Zizzos for a while,” Button said. “They are always professional and look great and are a team I wanted to work with. And I get to work with a legitimate Top Fuel team and learn from some great people.”

“It’s neat to see that there are people paying attention to us that I don’t even know,” Zizzo said. “And that speaks volumes for our team.

“He wanted to be involved with a Top Fuel team, he chose us, and I hope to represent him well and our whole entire team will represent all our marketing partners well as we usually do.”

Button Transportation will be an associate sponsor of TJ Zizzo and Zizzo Racing at every race in which the team participates in 2019.

TJ IN THE MEDIA: After Friday night’s pass of 3.762 seconds put TJ on the provisional Top Fuel pole, National Dragster wrote a great piece on how the Rust-Oleum Rocket underwent a strict diet in the offseason, resulting in a 100-lb weight loss!