GAINESVILLE, Fla. (March 16, 2019) – For the third consecutive race, Scott Palmer and his Magic Dry Organic Absorbent Top Fuel team have secured the No. 8 position in the elimination field, this time at the 50th anniversary Amalie Oil Gatornationals at historic Gainesville Raceway.

Taking advantage of Saturday’s cooler temperatures, Palmer peeled off a steady 3.750-second pass at 326.56 mph in the third qualifying session to earn his spot. His best from Friday, when it was much hotter and more humid, was a 3.812 at 319.90 mph.

“The good thing was this Magic Dry car went down the track in both conditions, hot yesterday and cooler today,” Palmer said. “We tried to improve in Q4 but broke a clutch lever, which I’m going to look at as some early race day luck maybe because if it didn’t happen there it probably would have been
in E1.

“We certainly weren’t going to be conservative because we made the decision to race offensively this year, and that includes in qualifying also. It might bite us from time to time but by the end of the year I think being aggressive will work to our advantage.”

Since he qualified in the top-half of the field, Palmer will have lane choice over T.J. Zizzo, a part-time racer who shocked the class Friday when he earned the provisional pole with a 3.762-second blast at 323.35 mph. Zizzo improved on that mark a touch on Saturday, finally topping out at 3.753 at
328.62 mph.

“They’re an independent team that only races once in a while but when they show up they’re fast,” Palmer said. “T.J. ran just about the same as us and they won’t be holding anything back in eliminations. If we both make it to the finish line, it will be a great race.

“We had the chance to run against T.J. in qualifying and at the other end we were talking about how cool it was two cars that came from nothing are running this well against all these big power teams. I’m proud of those guys. They do everything on their own and that’s so impressive. They are absolutely a threat and we’re not taking them lightly at all.”

As the eighth and ninth qualifiers, it’s likely Palmer and Zizzo will be the first pair of cars down the track when elimination action begins. That could make for a very interesting battle, especially if the expected rain comes in overnight and washes down the racing surface.

“No matter what, you know the NHRA will prep the track and make it awesome and we will definitely run this race at some point,” Palmer said. “Right now, we’ll plan for cool conditions like we had today when everyone was so much faster but if things change and the sun comes out, we’ll be ready for
that also.”

Palmer’s Magic Dry teammate, Rickey House, is one spot better on the Top Fuel Harley qualifying sheet after earning the No. 7 slot with a 6.378 at 222 mph. However, Top Fuel Harley only sets an eight-bike field so House will yield lane choice to first-round opponent Doug Vancil, who qualified second with a stout 6.181 at 237 mph.

“Crazy weekend so far but I made the show so I’m happy,” House said. “Now I have to get ready for tomorrow. It shows rain so I don’t what that will happen but it looks like we will have cool conditions either way and that’s good on my part.

“I just have to do what I’ve gotta do and not worry about the other guys. They all know me and they know I can step up there and run a good number. They know my bike can do it. Hopefully I can put some fear in everyone else and make them screw up. Some guys only got down one time. I have something to work with now, so I am pretty happy.” 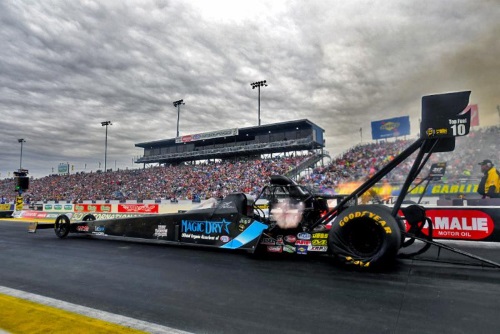 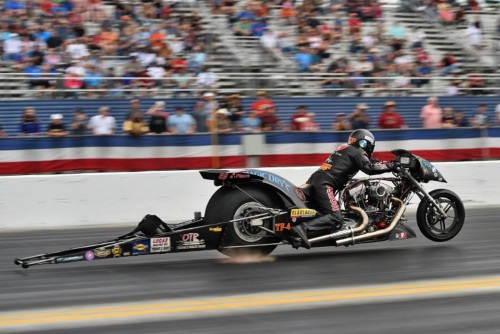