GAINESVILLE, Fla. (March 18, 2019) – The historic 50th Amalie Motor Oil NHRA Gatornationals dangled the carrot of a commemorative Wally trophy in front of Mello Yello Drag Racing Series competitors, and in the end, it was KB Racing-powered Bo Butner who scored the hardware. Butner picked up his second win of the season with a final-round defeat of Alex Laughlin. On the other side of the ladder, teammate Greg Anderson was picking up the pace in the red Summit Racing Chevrolet Camaro to strike another spark of optimism for the determined team.

“Today was all about being in the right place right time, but we have such a great crew, and Ken and Judy Black are like second parents to me,” said Butner. “These guys give me the best, and it’s pretty cool to get to drive this car with this team.”

Butner, the incoming points leader, qualified in the No. 8 position and had his fair share of luck on Sunday at Gainesville Raceway to claim the ninth Pro Stock win of his career. In the first round, he came up against another KB Racing-powered driver, Fernando Cuadra, and got it done with a 6.532-second pass at 212.46 mph to a strong 6.549, 211.63.

In round two, it was another KB Racing teammate in the other lane, and when Deric Kramer squared the tires immediately, Butner raked in the round-win with a 6.552, 211.76 to 20.651, 37.89. Without lane choice over No. 1 qualifier Rodger Brogdon in the semifinals, there was a fairly large question mark over the outcome heading into the round.

Brogdon broke on the starting line, however, rolling through the beams and illuminating the red light. Butner’s good fortune was enunciated when he fell into tire shake and coasted to an 8.103, 115.58.

Butner needed a little revenge for his teammates and the good Summit Racing name, and he made his best run of the weekend in the final. The Jim Butner Auto Group Chevrolet Camaro was set on kill as he blazed to a 6.505, 212.29 that was just a thousandth of a second off of low elapsed time of raceday. He didn’t need the exceptional run, though, because Laughlin had an ignition malfunction and broke at the starting line. 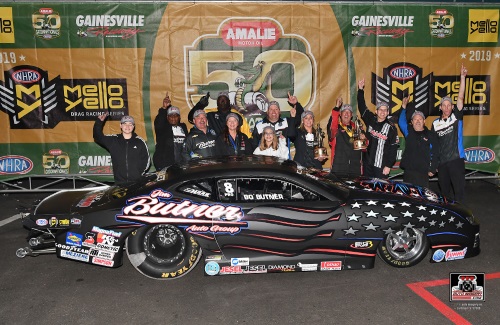 Butner and his crew will leave Gainesville Raceway with two of the special 50th anniversary trophies; his fiancée, Randi Lyn Shipp, earned the Stock Eliminator trophy there. The couple will have more to celebrate in the days ahead as Butner’s son and daughter-in-law are expecting a child – Butner’s first grandchild.

“This will be the last interview I give prior to being a grandpa,” said an elated Butner. “The baby is coming this week when we get home, and I cannot wait. His name will be James Earl Butner V, and I’m calling him J5. I have a hat collection going for him already after winning Pomona, No. 1 qualifier in Phoenix, and now winning the Gatornationals – and Randi Lyn will have one to add to the collection now, too. It’s a very exciting time for us. Life is good.”

What’s Next
The next Pro Stock event on the 2019 NHRA Mello Yello Drag Racing Series tour will be the DENSO Spark Plugs NHRA Four-Wide Nationals in Las Vegas, March 14-17. 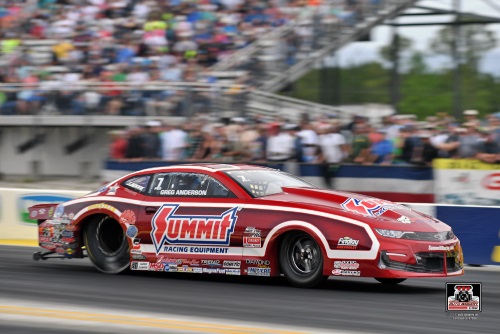 Position in standings following event: No. 11

The first two races of the 2019 season of NHRA’s Mello Yello Drag Racing Series did not go as planned for Anderson, but in Gainesville, it all turned around as he had one of the quickest cars on the property during qualifying to start from the No. 2 position.

“My Summit Racing Chevy Camaro showed a lot of potential this weekend, and we definitely made a lot of gains this week after testing well,” said Anderson. “We learned a lot and improved, but unfortunately, we didn’t parlay it into a race victory like we wanted. I’m just disappointed because I wanted to get this done for my dad. My Chevrolet was good, but it can definitely be better, and it will be.”

Anderson had hoped to win for his father, Rod Anderson, who passed away one week ago at the age of 85. Although he did not earn the trophy on Sunday in Gainesville, Anderson did reach a milestone as he recorded the 800th round win of his Pro Stock career – the most of any active Pro Stock driver. 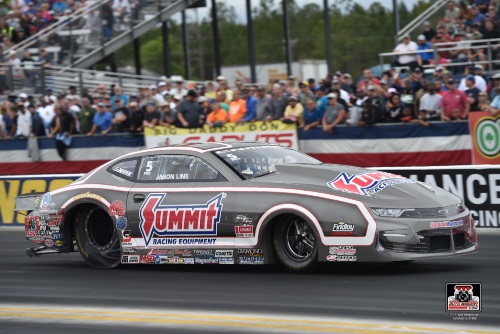 Position in standings following event: No. 3

The silver Summit Racing Chevrolet Camaro wasn’t quite on par with the red Team Summit entry, and Jason Line qualified an uncharacteristically low 10th. Although he made the third-quickest pass of the first round with a 6.527, 212.39, it was not enough to stand up to Laughlin’s 6.512, 210.83.

“It was a good weekend overall for KB Racing to get the win with Bo’s Chevrolet Camaro and for Greg’s Summit Racing Chevy to show so much improvement, but we struggled with my car, we hurt some parts, and I did a lousy job of driving,” said Line. “The end result is that you go home early, and we’ve got a lot of work to do before Vegas. We’re not afraid of hard work, so we’ll get home and get to it. We expect to be better overall in Vegas.” 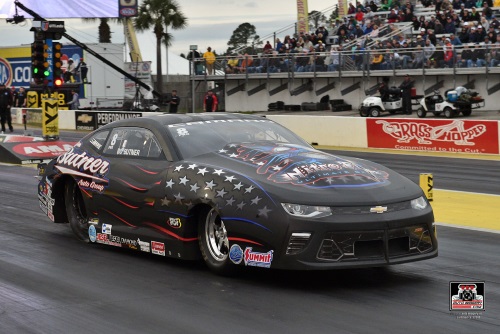 Position in standings following event: No. 1