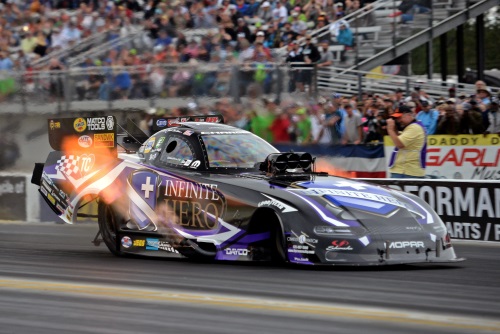 Beckman was looking to become the seventh driver to win back-to-back Gatornationals this weekend behind the wheel of his Infinite Hero Dodge Charger SRT Hellcat Funny Car and was joined in Sunday’s second round by four other Charger SRT Hellcat drivers — Matt Hagan, Ron Capps, Tommy Johnson, Jr. and Cruz Pedregon. Leah Pritchett raced her Mopar Dodge Top Fuel dragster into the second round as well and holds the second position in the Top Fuel championship standings through the first three events.

The run to the semifinals for Beckman began with the 2018 Gatornationals champion defeating reigning NHRA Funny Car world champion J.R. Todd in the opening round. Next, it was an all-Hellcat matchup between Beckman and Tommy Johnson Jr.’s Make-A-Wish Charger SRT Hellcat. Johnson defeated John Smith in round one, but Beckman came out on top in round two by 0.0007 seconds (approximately 4 inches). Beckman’s six-round winning streak in Gainesville came to a close versus Tim Wilkerson in the semis. 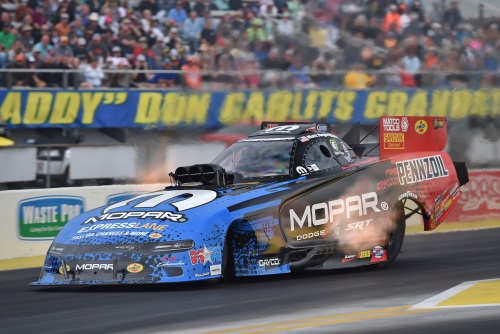 In Top Fuel, Pritchett was looking to become only the third female driver to hoist a Gatornationals Top Fuel Wally and positioned herself by qualifying the Dodge Mopar Top Fuel dragster No. 4 in the field. She was machine-like in her opening round match up with Pat Dakin, but was defeated by eventual Gatornationals Top Fuel champion Richie Crampton on a hole shot in round two.

Dodge//SRT Mopar NHRA Sportsman Spotlight
In Stock Eliminator, Dwayne Scheitlin from Brighton, Colorado, drove his 1970 A/SA Dodge Challenger R/T to a second round finish at the 50th Annual NHRA Gatornationals. Powered by a Mopar 440 Six Pack cubic-inch big-block V8, Scheiltlin had dialed a 10.14 ET but just missed his mark by 0.010 of a second and ended up running a 10.15 ET during eliminations.

“There is no Don Schumacher Racing driver that says we had a great weekend if you are not holding the trophy. We had a good weekend. It didn’t start off that way. We struggled the first three qualifying runs and finally got to the finish line on the last qualifying run. I think that’s all the guys needed. For Guido and John, now they had data. We stepped on it. We had a great running car. I don’t know if we stepped on it too far in the semifinals. We’ll have to look at the data. Tim Wilkerson was running phenomenal. We had to go up there and turn all the screws up. The upside is that we leave here in a good position with points, but the downside is you want every single trophy you can get your hands on. We’ll see if we can get that trophy in Las Vegas.”

“We were on the wrong side of the closest race of the weekend. I’m happy our Make-A-Wish Dodge Charger SRT Hellcat is running so well. It’s frustrating that we keep having gremlins jump up and bite us but I’m proud of the team for how hard they’ve worked. They keep pushing and the car keeps on performing. It’s just a matter of time. You continue to run that good, things will eventually go your way instead of going against you. I’m ready for Vegas. It’s one of my favorite tracks. Everything comes in threes, we’ve gone through our three and we’re moving on.”

“We had to have a blower swap right there (ahead of round two) and it had way too much power, knocked it off at the starting line, but now at least we know we’ve got a really good blower. At the end of the day, I really wanted to win this race. It’s the 50th anniversary, it’s the Gatornationals. We didn’t win the 50th, but we’d like to try and come back and win the 51st. But all in all, we’ve got a good Dodge Charger SRT Hellcat. I feel good rolling into Vegas. (Crew chief) Dickie Venables has a good handle on this combo that we’re running.”

“We were trying to find ourselves this weekend. We came here after a great test session in Phoenix with our brand-new DSR chassis. It’s not like we were that far off this weekend, it’s just (crew chief Rahn) Tobler’s been fighting some new car blues. This is just something you go through when you bring out a new car. Sometimes everything comes out perfect and sometimes you’ve just got to chase adjustments here and there. We ran into (crew chief) Jimmy Prock and Robert Hight in round two and they’ve got a great running car. Smoking the tires at the hit is not something Rahn Tobler is known to do and as soon as I got back to the pit from that run, he felt like he already knew why it did that. That’s what I love about racing with Tobler; he’s constantly thinking. Win or lose, he’s already thinking of how to get better. He catches things that will make us better in the future. Unfortunately, this 50th anniversary would’ve been a nice race to win but it’s a long season and I can’t get wait to get back out west and race at the Vegas Four-Wide.”

“The worst part is you hear the car next to you and you know that you got beat on a holeshot and you don’t need anyone telling you that. I don’t feel like I was super late. It was more of a case of him swinging super hard and I got hit with the punch. That’s the way it is. You take the highs super high and the lows you just deal with for a quick moment and then try and rebound. If I let that get me down that will just hinder our progression moving forward at the next race.”

“This Mopar Dodge dragster is really good. We brought in a new crew member, Jim Underco, this weekend and he gelled with our team and they are doing a great job. The parts we’re using are doing great. The time slips are looking fantastic. It’s all there. We definitely felt like we should have won that round, but that’s drag racing.”

Up Next: Denso Spark Plugs NHRA Nationals
Dodge//SRT and Mopar competitors will head next to the 20th annual NHRA Nationals, April 5-7 at The Strip at Las Vegas Motor Speedway. Five-time Las Vegas Funny Car winner Ron Capps will look to win for the sixth time and claim his first Four-Wide triumph at LVMS.

About Mopar
Mopar (a simple contraction of the words MOtor and PARts) is the service, parts and customer-care brand for FCA vehicles around the globe. Born in 1937 as the name of a line of antifreeze products, the Mopar brand has evolved over more than 80 years to represent both complete care and authentic performance for owners and enthusiasts worldwide.