“We’d struggled all weekend in qualifying with parts breaking and what-not so to pull off a career-best pass in Round 1 against the guy everyone is chasing in the points was really satisfying,” said House, who hails from the Houston suburb of Humble, Texas. “I pretty much knew Doug was going to be quick so I tuned the bike up for a big run and it held. Having a good light there was kind of icing on
the cake.”

Up next was Bob Malloy, who had posted an impressive 6.208 in his Round 1 upset of third-ranked Tii Tharpe, so House knew he needed to stay fast and have another good reaction time to have a chance. He did earn a .011-second advantage when the green light flashed, but a fuel line rattled loose and covered his rear slick with nitro. That started his tire spinning, which allowed Malloy to slip by for the win.

Adding to the pain of the defeat was the fact Malloy had some trouble of his own down track and only ran a 6.494 at 192.71 mph.

“I definitely feel like we let a final-round slip through our fingers there,” House said. “With these bikes if any one thing goes wrong, it’s over. I’m upset, but there’s nothing you can do about it at this point except move forward.

“The next race for our class is Houston, so it’s a hometown race for me. That’ll be a lot of fun because all my friends come out to support us. It’s time to introduce everyone back home to Magic Dry Organic Absorbent. It’s definitely something the oilfield guys need to know about and use.”

Prior to his Round 1 pass Sunday, House’s previous career-best elapsed time was 6.227 seconds.

House’s Magic Dry teammate Scott Palmer came up short in a pedaling contest against first-round opponent T.J. Zizzo in Top Fuel dragster action, which took place after a rain delay. Palmer got a slight .013-second head start but soon smoked his tires, allowing Zizzo to get past. A moment later, Zizzo got loose and had to get on and off the gas in his car at least three times to get it to hook back up. Palmer was trying to give chase but his second stab at the throttle put him over by the wall, forcing him to retire. 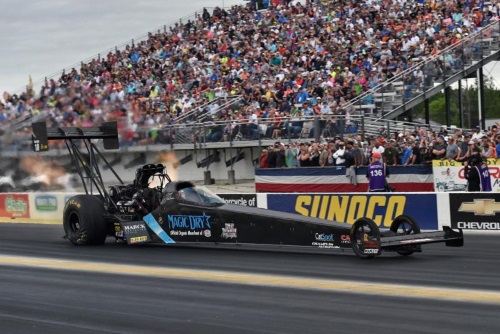 “You can’t take the Zizzo’s lightly and we knew that,” Palmer said. “They went up there trying to run low 3.70s just like we did and both of us did the same thing. For some reason with this car lately when it smokes the tires it’s getting sideways so it’s hard to pedal. You have to let it get it back straight before you get back on the gas.

“That’s probably due to the fact that this car has a lot of runs on it. There’s a reason big teams don’t run cars more than 175 runs. They don’t do it to waste money; they do it for a reason, and to run at this level, you have to step up.

“We have a brand-new car waiting for us in Indy at the Lucas chassis shop. We are going to get it and go straight to Torrence’s shop to put it together so we can run it at Vegas. Jason McCulloch and the Laganas are helping us and we are going to show up at Vegas and be just as aggressive when we
get there.”

Up next is the 20th annual Denso Spark Plus Four-Wide Nationals, April 5-7, at The Strip at Las Vegas Motor Speedway.