GAINESVILLE, Fla. (March 19, 2019) – If you drove a green gator themed Top Fuel car in Gainesville on St. Patrick’s Day you would expect the luck of the Irish to be on your side. It didn’t go that way for Terry McMillen and his AMALIEⓇ Motor Oil XTERMIGATORⓇ Top Fuel Dragster.

McMillen would qualify solidly in the top half of the field for the third race in a row when he clocked a 3.743 elapsed time in the fourth session to place sixth in the 16 car field. The effort would pair McMillen with Doug Kalitta in the first round of the historic 50th anniversary of the race.

McMillen and Kalitta ran identical elapsed times of 3.749, with Kalitta nipping McMillen at the finish line by just 0.0226 seconds. It’s the second time this season that Kalitta has beaten McMillen on a hole shot.

“Doug just has our number right now,” McMillen said. “We’ve got a good car and a good team. This will sting for a little bit because it was such a big race, not just because of our sponsor, but this is the only time they’re going to run the 50th Gatornationals. We’ve got 21 more races, we’re going to get our chances.”

Overall it was a good week for McMillen. He continues to match his best performance numbers of his career and agreed to terms with AMALIE to extend his contract until 2023.

“I wish we could have stayed around longer today for the Barkett family and all of the employees and customers that were here today,” McMillen said. “We’re not giving up. One of these years I’m going to hand that Gatornational trophy to AMALIE and it will be the best day of my drag racing career.”

The next stop on the NHRA Mello Yello tour is the DENSO Spark Plugs NHRA Four-Wide Nationals at The Strip at Las Vegas Motor Speedway, April 5-7. 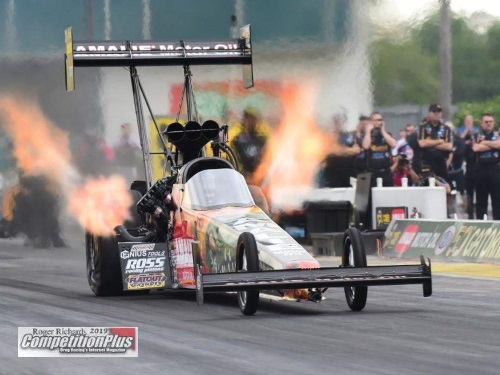