Saint-Joseph-de-Beauce, Quebec, Canada – (March 19th, 2019) – After dominating his first race in the ARCA series earlier this month in Pensacola (Florida, USA), Raphael Lessard is adding another event to his calendar by competing on April 6 in the Zombie Auto 150 on the historic Bristol Motor Speedway oval (Tennessee, USA) in the K&N Pro Series East. The Bill McAnally Racing (BMR) team, based in California (USA), will prepare the car for Raphael Lessard.

The Bill McAnally Racing (BMR) team has been running and winning since 1990, having earned eight K&N Pro Series West titles with drivers such as Brendan Gaughan and Todd Gilliland. The team founded by Bill McAnally has competed in multiple levels of NASCAR – including NASCAR Whelen All-American Super Late Models, the NASCAR K&N Pro Series and the NASCAR Gander Outdoors Truck Series.

“We are excited that Raphael Lessard will be racing a BMR Toyota Camry at Bristol. He’s a talented young driver and we look forward to playing a role in his development”, said team owner Bill McAnally.

The K&N Pro Series also shares a few weekends with one or more other NASCAR series. Raphael Lessard’s K&N race will take place on Saturday afternoon, just after the NASCAR Xfinity Series race, and the NASCAR Monster Energy Series race will take place on Sunday afternoon. This strategic planning means that Raphael Lessard will be on track in front of all the major teams, of NASCAR management along with management from manufacturers and all the partners present, giving him some key visibility for his racing program. 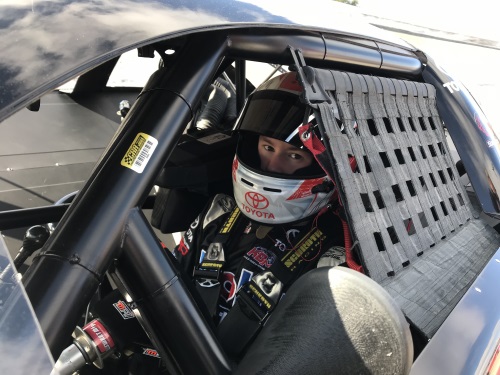 “I really enjoyed the Pensacola ARCA race in the powerful and heavy car, and I do not expect any problems adapting to Bristol with a K&N car that is very similar to the ARCA in weight and power,” said Raphael Lessard.

The four to nine degrees of banking on the short straight and 26 to 30 degrees in the four corners allow cars to run quicker in Bristol than on the other half-mile oval tracks. “I have raced twice at Bristol in Super Late Model cars, winning a qualifying race and pole position in one race, and winning the second one. I really feel comfortable and love to drive on this high banked half-mile. The track always tilts inwards and helps you to stay on track. Diving deep into turns 1 and 3 takes your breath away,” explained the young driver.

“Driving all out at Bristol means focusing on perfection. Because of the higher corner speeds due to the high banking, we stay on the accelerator longer than on other half-mile, using the banking and change of direction to slow the car down in the corners. We can also reaccelerate earlier when exiting the corner, as the banking pushes the car into the track and increases tire grip. You have to stay totally focused at all times,” added Raphael Lessard.

“This race will be special for me in terms of experience and fun, a highlight of my season I am sure. I will attack until the end of the 150 laps, always aiming for victory with the team and our partners,” said the determined driver. 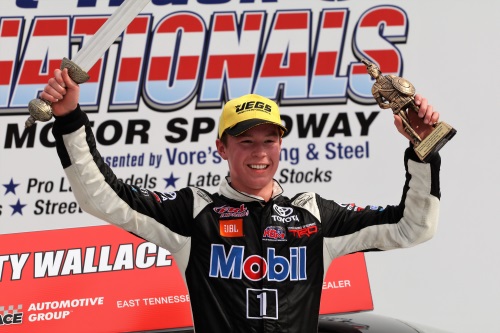 The K&N Pro Series East and West are the fourth level in the NASCAR hierarchy and specialize on short oval tracks, with 10 races scheduled on such tracks this year, in addition to a visit to the Monster Mile at Dover International Speedway (Delaware, USA), two visits to the one-mile oval of New Hampshire Motor Speedway (New Hampshire, USA) and one to the Watkins Glen road circuit (New York, USA). The series allows younger drivers, teams and their staff to qualify to run on NASCAR’s largest tracks.

Born on July 5, 2001, in St-Joseph-de-Beauce, Quebec, Canada, Raphael Lessard is one of the hottest prospects in North-American racing today. Raphael made his debut as a race car driver in 2013, on local tracks in the Quebec City area. A quick learner, Lessard moved up the ranks through 2014 and 2015, when he caught the eye of ex-NASCAR Cup Series driver David Gilliland. This led to Lessard running in in the last four races of the 2015 season on the PASS North Tour, an asphalt Late Model series, driving for David Gilliland Racing. In 2016, his first full-time season with Gilliland, Lessard won the CARS Super Late Model Tour Championship with four wins, eight top-five and nine top-ten finishes in his No. 99 Toyota Camry. He also became the youngest Canadian race car driver to win a USA-based major stock car series. Since 2016, Lessard is part of Toyota’s prestigious driver development program (TRD). To this day, he is the only Canadian to be recruited into this program. Raphael Lessard Racing

ABOUT FRL EXPRESS Inc.
FRL Express Inc. is a general trucking company founded in December 2004 by François Lessard, specializing in general transportation in closed trailers, on short or long distances, in Canada and in the United States. Our team now employs about fifty logistics specialists as well as ten contracted truck drivers. We are proud of our business growth and evolution since our inception and recognize the hard work of every member of our team who contributed to our success. Our business priorities are taking care of our team members, providing flawless customer service, and ensuring complete customer satisfaction. We contribute to the success of our son Raphaël Lessard and are very proud of his accomplishments.