Straight after the completion of the Gatornationals on March 17, Palmer and crew headed to Indianapolis to take delivery of a brand-new MLR chassis. While there, they made some necessary updates to the car that carried Palmer to all those big numbers with hopes of making it a reliable back-up once the new car goes into service.

“The new car is in the trailer but we probably won’t run it until Charlotte (April 26-28),” Palmer said. “We are waiting on a new paint scheme and some other things and then we will roll it out. It’s the first car I’ve ever had that was built 100-percent for me. Everything on it is new, so I’m not going to rush bringing it out. We want to make sure it’s good to go from every aspect.

“What’s cool is the car we have been running was front-halved and freshened up while we were at MLR so it’s basically new. It had a lot of runs on it and we found some problems. It’s been wanting to go sideways in the burnout and then when I step on the gas, even on a good run, the back end would try to washout.

“Even our good runs sometimes looked like we shouldn’t have even made it down the track. We couldn’t figure out what was happening so the guys at MLR put it on the jig and discovered the front end was off. We decided to front-half it, fix some other stuff and now we are going to go run it again for the next two races to see how it responds. Then we will put it upstairs as a complete spare and run the new car.”

Like a teenager with a set of keys to not one, but two hot rods, Palmer did take a minute to thank the people outside his own crew that made all this happen.

“We spent a week at MLR and Richie Crampton (fellow driver and chassis builder) and all the guys at that shop absolutely dropped what they were doing to front half the car so we could have something to race in Las Vegas. They front-halved that car in two days, got it back to us in great condition, and we were on it fast, putting it back together.

“Once we left MLR with the new car and the front-halved old car, we went to (reigning champion Steve) Torrence’s shop and built out the new car. It’s incredible the help those guys give us. Jason McCulloch wired and plumbed it and the rest of the CAPCO boys jumped in with all the other stuff. They got it all handled so quickly my guys were able to go home for a few days. It’s pretty cool to have the world champions helping you build out your car.”

Now Palmer and crew have new optimism as they roll to The Strip at Las Vegas Motor Speedway for this weekend’s unique race.

“This is the new four-wide race and I love racing four-wide,” Palmer said. “And I remain very excited about our chances. This car was already running well with a tired front end. I mean, we posted career best numbers and have qualified well at every race. With all the improvements we’ve made, I think we’ll start doing better on race day now as well.” 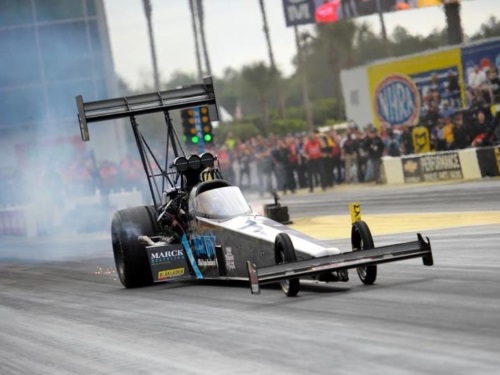