LAS VEGAS, NV (April 7, 2019) – It doesn’t quite have the “new car smell” of a brand-new Top Fuel dragster, but Scott Palmer’s retooled Magic Dry Organic Absorbent rail has delivered just as many smiles in its’ first race out — this weekend’s 20th annual Denso Spark Plugs Four-Wide Nationals at The Strip at Las Vegas Motor Speedway.

Palmer and crew left the last race in Florida and went to Indianapolis to pick up a new chassis that was waiting on them. While at MLR, they had the dragster they’d been running the past year and a half freshened up, which included a new front end. According to Palmer, the “old girl” feels like a completely different beast, especially during the 3.790 at 323.27 mph he used to qualify 11th on the race day ladder.

“This thing is unreal,” Palmer said. “It’s like a whole new car. So far, pretty much everything we’ve asked it to do, it’s responded, so we are super happy. Of course, we ran our career best numbers a few times earlier this year with this same car and now we’re here running well, only under different conditions.

“We are not comparing apples to apples because we went from track temp of 80 degrees (in Florida) and even cooler than that earlier this year to a track that’s 120 degrees. Naturally, we had to back this thing way down to make sure we got to the other end. We took so much weight off the clutch its crazy, but so did everyone else.”

Under the unique four-wide format, Palmer will race three other drivers at the same time. The top two elapsed times from each session advance to the next round until the finals, when the quickest car of the four is the overall race winner.

“We didn’t get down the first session Friday so we switched to a mindset of knowing we really wanted it to go down the other three rounds,” Palmer said. “We had to make it down the racetrack to gather some data on this re-worked chassis. We had to go to the finish line all the rest of the times.

“This last time, we actually put a hole out, and I think we may have a coil out. We are changing all the ignition stuff right now. Still, we put a cylinder out and threw the belts off but this is the first time I’ve ever had a car good enough to run a 3.83 even with a hole out from the hit and shutting it off completely at 700 feet. The thing runs good.

“If you can go down the track tomorrow and run a mid- to high-3.70, you are going to have a pretty good shot at going to the second round. This is a racetrack where we’ve been three rounds on Sunday before and if we go three rounds tomorrow we can win the race. That makes it more realistic to win. 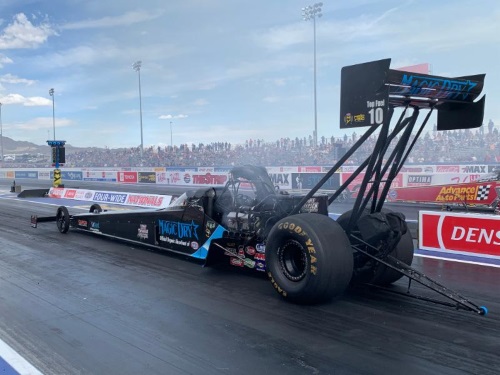