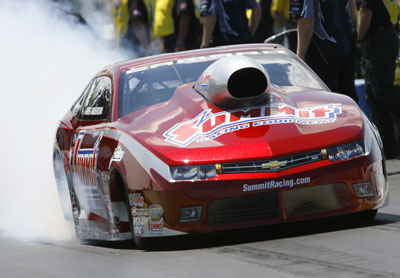 When it comes to performing at a high level and getting the most out of a Pro Stock car, it doesn’t get much more ideal than scenic Sonoma Raceway.

It’s also one of many reasons why four-time Pro Stock world champion Greg Anderson loves racing at the track. Of course, having a Pro Stock-best four wins at the facility doesn’t hurt either, but having success and enjoying himself seems to go hand-in-hand for Anderson at Sonoma.

The current points leader and four-time winner in 2015 will try to make it five wins at this weekend’s 28th annual NHRA Sonoma Nationals at Sonoma Raceway, which serves as the second of three stops on the NHRA’s legendary Western Swing. 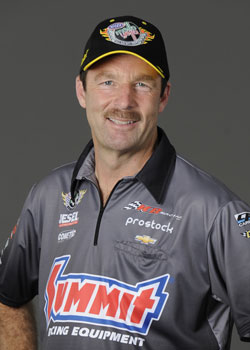 “I have a lot of racetracks that I like, but quite honestly, I think Sonoma might be at the top of the list because of the racetrack itself and the sea level conditions,” said Anderson, who last won in Sonoma in 2011. “The track is smooth as glass, and it’s just a neat, neat place to race. The area is beautiful, and I just love it there.

“I’ve had a lot of success in Sonoma, won a lot of races there, and it’s just a feel-good place to go. Pro Stock cars love it there. Anytime you get to race at sea level, these cars really come to life. That’s when it’s fun. We’ve had a lot of fun at Sonoma Raceway for a lot of years, and it’s just one you look forward to every year.”

Khalid alBalooshi (Top Fuel), Courtney Force (Funny Car), Jason Line (Pro Stock) and Eddie Krawiec (Pro Stock Motorcycle) are the defending winners of the event which will be televised on ESPN2. It is the 15th of 24 events in 2015 and Anderson appears to be headed to the Mello Yello Countdown to the Championship in top shape.

He broke a long winless streak early this year, setting off a string of dominant performances that included victories in Gainesville, Englishtown, Epping and Norwalk. Anderson has also been to seven final rounds in 2015, clearly proving that his Summit Racing Equipment Chevrolet Camaro is back to performing at a championship level.

“We definitely have a certain amount of confidence going into this race,” Anderson said. “Everything about this racetrack fits our program. We, as Pro Stock racers, love a racetrack where we can make our cars run near record elapsed times and near record speeds. This is one of those racetracks. There have been years where you aren’t quite as fast because of the weather, but many times you have the chance to set national records there. We race to run fast, that’s why we do it – we don’t like to run slow. This weekend in Sonoma, getting back to those sea level conditions, hopefully we’ll have the opportunity to run very fast with our Summit Racing Chevrolet Camaros.”

To run fast in Sonoma, Anderson and his team will have to adjust quickly from the high-altitude conditions and challenges that are always present in Denver at the first stop of the Western Swing. Anderson, who fell in the second round at Bandimere Speedway, has always done well with that challenge and is looking forward to seeing how his team responds again in 2015.

“Going from Denver to Sonoma with that big swing in conditions is tricky, but it’s also fun,” Anderson said. “The crew has to come in and show how strong they are, and I’ll put my crew up against anybody’s out there. They’ll adapt better than anyone. Having a drastic change in the conditions and having to work hard to adapt – that’s how every race should be. It shouldn’t be the same every run without having to make any tuning changes on your car.

Anderson also knows he needs a strong showing in Sonoma, in part to continue building momentum towards the Countdown to the Championship but also if he hopes to keep the points lead in the competitive Pro Stock class. It’s currently 37 points over reigning world champion Erica Enders, who also has four wins this year, but Anderson must also contend with a talented Pro Stock class.

Teammate Line held off V Gaines last year to win in Sonoma, while 2012 world champ Allen Johnson, Larry Morgan, who won the most recent event in Denver, Chris McGaha and Drew Skillman all figure to be drivers to watch in the 200-mph factory hot rod category.

“We didn’t perform quite as well as we had hoped last weekend in Denver, but we got a lucky break and left with the points lead,” Anderson said. “This weekend, the battle will continue. A lot of doing well in this class has to do with your performance at the starting line, so I’ll have to be on my game. I’ve done a good job for much of this year, but last weekend wasn’t my best performance. I’ll need to keep my head in the game in Sonoma so that we can get the job done.”

In Top Fuel, Sonoma presents the ultimate opportunity for a driver to set the stage for a championship run. Reigning world champion and current points leader Tony Schumacher (2007 and 2008), Larry Dixon (2008), Antron Brown (2012) and Shawn Langdon (2013) have all claimed victories at Sonoma during their championship seasons and all four are title contenders once again. Others to possibly add their name to that list include perennial title contender Doug Kalitta, a five-time Sonoma winner, reigning Auto Club Road to the Future Award winner Richie Crampton and Steve Torrence, who won the opening leg of the Western Swing in Denver.

The Pro Stock Motorcycle world championship came down to Krawiec, who posted his first win of the season in Denver, and eventual world champ and teammate Andrew Hines. Teammate Hines, perennial contender and 2013 race winner Hector Arana Jr., who won in Chicago, Englishtown winner Jerry Savoie, Karen Stoffer, who has two wins this season, Matt Smith, Angelle Sampey and Hector Arana are all members of the two wheeled factory class that can propel themselves to Pro Stock Motorcycle glory at Sonoma.