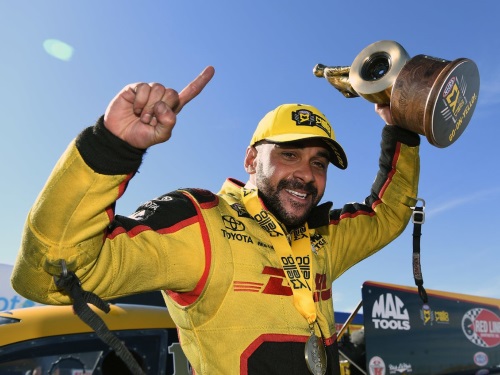 Race Recap:
For the second year in a row J.R. Todd is the Las Vegas Four-Wide Nationals winner. This is also the third consecutive time Todd has powered his DHL Toyota Camry Funny Car into the winner’s circle at The Strip at Las Vegas Motor Speedway. Todd made his strongest pass of race day, 3.970 seconds at 319.70 mph, in the final quad and it was enough to outrun No. 1 qualifier Tim Wilkerson, Tommy Johnson Jr. and Jack Beckman.

Todd’s path to victory included two second place finishes in the first and second quads both times finishing behind Wilkerson. In the first round Todd took the first round win with his right foot grabbing a hole shot win over Gary Densham to advance to the second quad. Racing beside Matt Hagan, Densham and Jim Campbell Todd powered his DHL Toyota Camry Funny Car to the next round with a winning time of 4.349 seconds at 210.31 mph. Todd had his hands full as his Funny Car smoked the tires just before the finish line but a quick pedal job gave him enough momentum to carry him to victory.

In the second quad Todd again got the jump on one of his four-wide foes as he took a strong reaction time advance over Matt Hagan to race to the final quad. Todd’s Funny Car moved first and his .049 second reaction time was more than enough of an advantage to beat Hagan’s .087, to put Todd’s 4.03 second elapsed time in front of Hagan’s 4.017.

Quotable:
Todd on winning three in a row at The Strip: “It’s all Kalitta Motorsports. It seems like these DHL Toyota Camrys always run well here. The whole team has a really good handle on this place, especially my crew chiefs Todd Smith and Jon Oberhofer. It seems like the more we come here, the better grip they get on this place. We struggled early this year with cold tracks and shaking the tires. I knew that it was eventually going to warm up and sure enough, it was hot and nasty here today. That’s been an equalizer for us.”

Todd on final run: “That 3.97 was pretty stout. The 4.03 in the second run – I definitely stole some away there and I didn’t mean to do that. It was probably a 4.01, which was right in the hunt with everyone. (Tim) Wilkerson was really good all weekend. I expected him to step it up and throw down in the final, but you never count out Todd Smith and Jon O. Give them enough shots at it and they’re going to figure it out and sure enough we got our act together this weekend.” 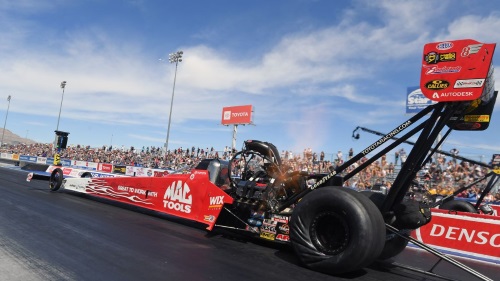 Race Recap:
Doug Kalitta held onto his Mello Yello Top Fuel points lead and raced to his second consecutive semifinal finish of 2019. In the final quad Kalitta and his Mac Tools Top Fuel dragster crossed the finish line right behind first-time winner Mike Salinas and Brittany Force. Kalitta was second off the starting line but lost traction as his dragster was bearing down on the finish line with a 4.333 second, 193.74 mph pass.

Kalitta took his first round win of the day with a hole shot win as the Mac Tools Top Fuel dragster racer continued a pattern of strong reaction times leading to win lights. His .051 second reaction time gave him enough of a jump off of the starting line to defeat Terry McMillen and his .069. The veteran driver was the first driver off the starting line and he used that advantage to advance. His winning elapsed time was 3.78 seconds over McMillen’s slightly quicker 3.770 second pass.

For the second consecutive round Kalitta executed a hole-shot win over Steve Torrence to advance to the final quad. The Mac Tools dragster was the second race car to the stripe behind Brittany Force. Kalitta’s winning time of 3.790 seconds at 320.81 mph was bolstered by his .079 second reaction time.

Quotable:
Kalitta on trying to win first Four-Wide Nationals: “I was hoping to get a win in that final quad. I am still trying to win a four wide. It is a crazy deal. It is fun but a little chaotic and your adrenaline is running through you when you roll up there. Bruton Smith is hands down the best track owner and that is the biggest reason I support this race. I love the guy for what he has done for the sport.” 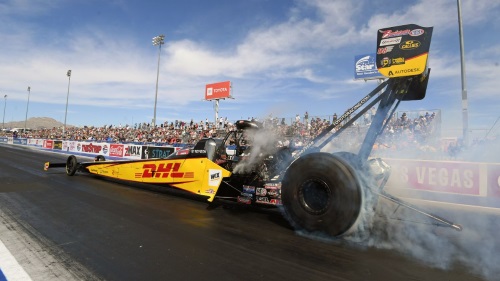 Race Recap:
First round, Richie Crampton powered to the second quad and a quarterfinal finish with a solid run of 3.769 seconds at 316.23 mph. It was a good effort for the DHL dragster after a tough start to qualifying. His DHL dragster gave up a little time on the starting line but Crampton kept it in the groove and closed the gap quickly to power to the second place finish in his quad. In the second round he joined teammate Doug Kalitta.

In 2015, before the event switched to the four-wide format Crampton took his lone win at The Strip. In the second quad Crampton was not able to advance and make a run at his second win with his DHL dragster. Crampton was second off the line but at half-track he lost traction, slowing in lane four with a 4.903 second run at 147.68 mph.

Quotable:
Crampton on racing at Las Vegas Four-Wide Nationals: “It was a good day. The four-wides can be a little bit of a wild-card. We had a really good run in the first round, then we just spun the tires on the second run. It would have been nice to bring home a second straight Wally, but all in all, it was a good weekend for the DHL/Toyota team. Winning at least one round is crucial. That’s what crippled us last season. First-round losses just ruin you in the points. Minimizing those first round losses is the key to having a chance for a successful run in the Countdown. Right now, we’re still mid-pack in the top-10 and it feels good. Now, we’ll start setting our sights on Houston and running at sea level.” 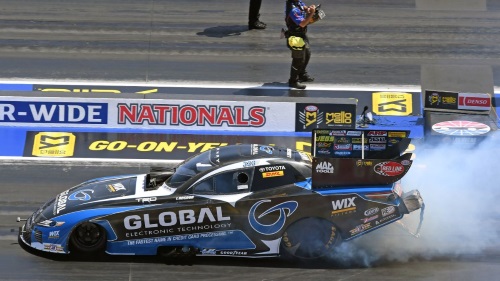 Race Recap:
Shawn Langdon hit the throttle and his Global Electronic Toyota Camry Funny Car was the first Funny Car off the starting line with a strong .059 reaction time, unfortunately his Goodyear slicks began hazing the track at the top end and he crossed the finish line third. The two far left lanes proved to be tricky for both competitors as Langdon in lane three and Robert Hight, the No. 9 qualifier in lane four smoked tires. Langdon will head to the next national event in Houston just eight points outside the Top Ten.

Quotable:
Langdon on first round run: “We were running strong and then it started smoking the tires. I tried to give it a quick pedal but it started mixing up cylinders. I had my hands full for sure. It was moving around a lot at the top end. This Global Electronic Technology team will get back to work and be ready for Houston.”