LAS VEGAS, NV (April 8, 2019) – ‘What happens in Vegas, stays in Vegas’, once a marketing slogan for the city, now something Terry McMillen hopes he can use to put this weekend’s race behind him.

McMillen, driver of the AMALIEⓇ Motor Oil XTERMIGATORⓇ Top Fuel Dragster was hoping for a little luck at the Vegas 4 Wide Nationals. The career best performances that McMillen has been experiencing this season hasn’t really been reflected in the race day results and it was something he wanted to improve on this race. However, for the third race this season, McMillen falls to Doug Kalitta on small hole shot.

“That was my fault,” a disappointed McMillen said after the race. “I used to think a .069 light was pretty good. Not anymore. We outran them and Doug beat me on the tree… again. I just have to get better. I let the team down and I let our marketing partners down.”

McMillen won’t have long to worry about that loss. The season continues next week at The NHRA SpringNationals at Houston Raceway Park, April 12-14. 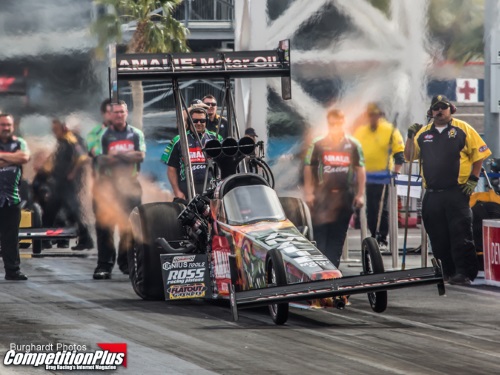