Sadly, in 2017, Chandler lost a hard-fought battle with glioblastoma, the most aggressive form of brain cancer. Her husband Doug Chandler knew how important the giving car program was to his wife and has generously continued the program in her honor.

At this weekend’s MOPAR Express Lane NHRA SpringNationals Presented by Pennzoil in Baytown, Texas, a suburb of Houston, Doug has chosen to recognize The University of Texas MD Anderson Cancer Center with a special tribute livery on one of his late wife’s giving cars, the Beckman-piloted Dodge Charger SRT Hellcat.

Throughout her battle with glioblastoma, Terry received treatment at MD Anderson, the world-renowned cancer treatment and research facility based in Houston. By campaigning an MD Anderson car, Doug wishes to thank the team and medical staff for their care of his wife and raise awareness for glioblastoma. 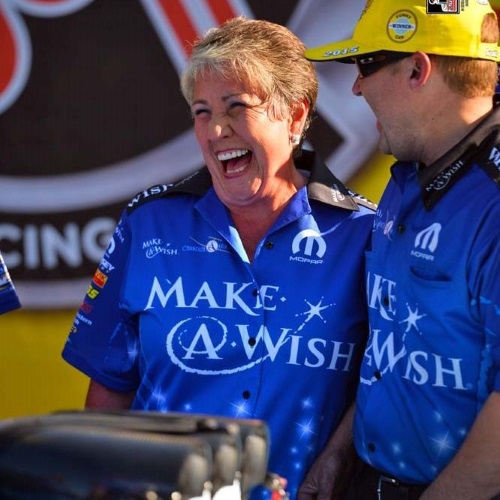 “Before Terry’s diagnosis, I had never heard the term ‘glioblastoma’ and I know I’m not in the minority when I say that,” said Doug Chandler. “Finding out my wife had been diagnosed with cancer, and that it was the most lethal form of brain cancer and was incurable was devastating. I asked Terry’s team of doctors why there was no cure and they said cures are developed through research, and of course, research takes money. Essentially, funding is what finds a cure.

“By running this car, it’s my goal to raise awareness for glioblastoma and other lesser known forms of brain cancer, which will hopefully lead to more funding for medical research. With this race taking place in MD Anderson’s backyard, this was the perfect place to run this car.

“The team at MD Anderson treated Terry so well. There was no question where we would take her to receive treatment; they’re the best,” added Chandler, who through his TLC Foundation, has awarded two grants to MD Anderson for glioblastoma research. “My wife championed great causes to bring awareness to others, whether it be military veterans or sick children. I honor Terry by joining in the fight to find a cure for glioblastoma.”

DSR team owner Don Schumacher is also no stranger to cancer, or the services provided by MD Anderson. Upon his 2014 diagnosis of head and neck cancer, Schumacher also elected to receive treatment at the center. He describes his experience there as “the most effective and best treatment I could have received for my disease” and credits the team for helping him to overcome cancer.

“MD Anderson is truly amazing, and I’m grateful that both Don and Terry were able to receive treatment there,” said Megan Schumacher, daughter of Don Schumacher and Vice President of DSR. “I was able to see first-hand their abilities at work while Don underwent treatment. The care that MD Anderson offered was first class; they really helped you feel at home. The doctors and staff were incredible to our family, making sure we understood every step of the process.

“We are glad that we will be able to help share how amazing MD Anderson is when the car hits the track this weekend thanks to Doug Chandler,” added Schumacher, who oversees Chandler’s giving car program. “I am forever thankful to MD Anderson for the care they offered to two of the people closest to me. I miss Terry every day but know that she would be so happy to see MD Anderson receiving national attention for what they do.”

Beckman, a cancer survivor himself, who battled and overcame non-Hodgkin’s lymphoma in 2004, describes the opportunity to pilot the MD Anderson Cancer Center Dodge Charger SRT Hellcat Funny Car as an honor, saying, “I’m a cancer survivor; my mom didn’t beat it. It’s something that hit my house hard and then came back years later. I drive for a man who is a cancer survivor, who went to MD Anderson for treatment, and that’s part of the reason he’s still here. 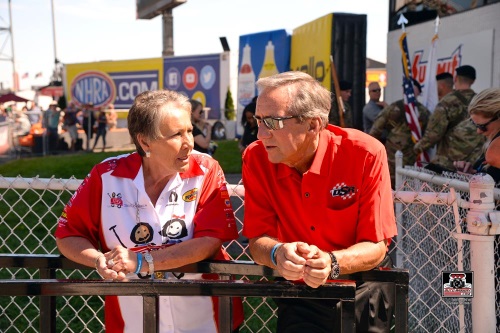 “I drive the car as a tribute to Terry Chandler, a woman who didn’t survive cancer. The folks at MD Anderson did everything they could for her so I feel a debt of gratitude to the people who work there, and I feel upon the people who are patients there. I can’t think of a better way to pay it forward and pay it back than to fly their colors into the winner’s circle at Houston.”

Beckman and the Dean Antonelli/John Medlen-led Funny Car team will unveil the MD Anderson Cancer Center Dodge on the Houston Raceway Park starting line just prior to firing up for their first qualifying session of the weekend. Funny Car Q1 is scheduled for 4:30 p.m. CT on Friday, April 12. To make a donation to MD Anderson in Terry Chandler’s honor, please click here.