Maggi sneaks past Castro and Snider, gets maiden Euro NASCAR win
The Swiss takes advantage of a last-turn crash to grab his maiden NWES win 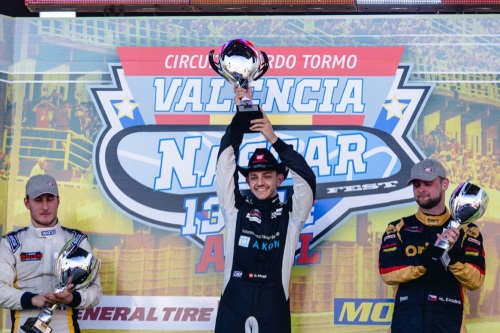 It was an exciting ELITE 2 Round 1 at the Circuit Ricardo Tormo and at the end of it, Giorgio Maggi (#50 Hendriks Motorsport Ford Mustang) went to Victory Lane in his first ever NASCAR Whelen Euro Series race. The Swiss driver was quick to avoid a crash in the very last corner of the race after a restart with two laps to go, picking up the second ever NWES win for Hendriks Motorsport.

Maggi took advantage of the fierce battle between Andre Castro (#24 PK Carsport Chevrolet Camaro) and Myatt Snider (#48 Racing Engineering Ford Mustang). The two American drivers fought hard for the lead all race long and at the very last turn Snider made a move to overtake Castro for the lead. The attempt resulted in a contact which send both drivers spinning, giving Maggi the opportunity to sneak past the #24 and #48 to grab the checkered flag.

“I’m really happy to win here in my Euro NASCAR debut in Valencia,” said the 21-year-old race driver, who also won the Rookie Trophy. “I tried everything to catch those two guys in front of me, but in the end my goal was to save a little bit of tires. I managed to avoid crashing into them and got the win. Many thanks to Hendriks Motorsport for giving me such a great race car.” 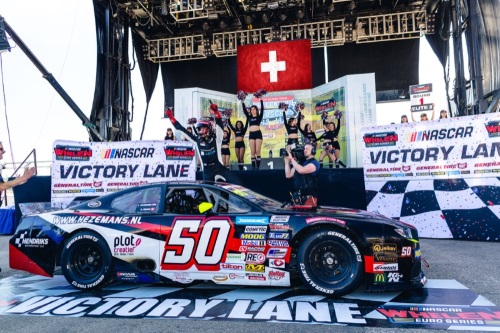 “I advanced to Superpole in qualifying, but couldn’t set a lap time due to a gearbox issue,” said Ghirelli. “The mechanics did a great job and changed it very quickly. We had a fantastic race driving from twelfth to second, it was great fun and it was incredible.”

“I’m proud of my team for the fantastic car they gave me,” said Doubek, who is doing double duties this year by racing in ELITE 1 and ELITE 2. “I’m angry with myself because I was too slow. I had a better pace in the ELITE 1 race. I made too many mistakes, so I’m not that happy. I hope to be faster in tomorrow’s races.” 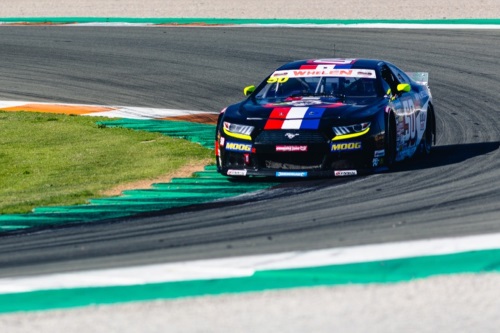 The Dutchman and Eric De Doncker (#98 Motorsport 98 Ford Mustang) completed the Legend Trophy podium. Arianna Casoli (#54 CAAL Racing Chevrolet SS) won the Lady Trophy by finishing 16th. Snider and Castro ended up 23rd and 24th after spinning in the last turn of the race and Snider received a 10 championship points penalty for causing an avoidable collision.

The ELITE 2 Division will be back on track on Sunday at the famous Circuit Ricardo Tormo. The second round will start at 10:30 am CEST. The race will be streamed live at Fanschoice.tv, the Euro NASCAR Youtube channel and Facebook page, Motorsport.tv and a vast of websites and social media pages around the world.