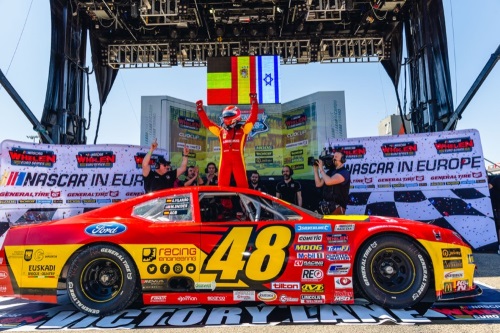 With his 21st career win, Vilarino brought Racing Engineering to Victory Lane in the team’s first ever NASCAR race.

The Spaniard started from pole position and kept the lead in the first corner of the 2019 NASCAR Whelen Euro Series season. Longin was able to pass Day early, moving from fourth to second. The three drivers put up a tough three-way battle for the lead that last the most part of the 72-kilometer race.

“It’s been a fantastic race,” said Vilarino, who led from flag to flag. “Thanks to the Racing Engineering team for giving me such a great car. In the beginning we were faster than everybody else, but then Stienes and Alon came back to my rear bumper. Stienes was much faster than me until he dropped the pace a little bit. I am really happy to win in front of my home crowd and for the fifth time here in Valencia.”

“I started fourth and suddenly after turn 1 I was second,” said Longin. “I was too nice to Day. I know he is good at overtaking and that is why he passed me again. He began to struggle so I was able to catch him again and also close the gap to Ander. In the end the #48 was too fast for me.” 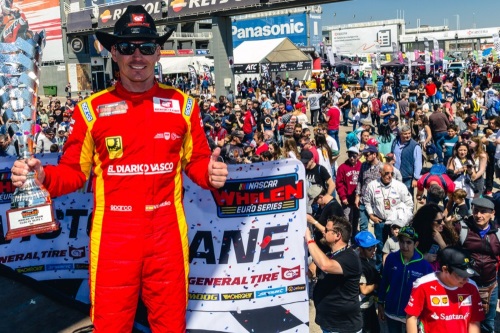 “The team did a really great job,” said Day. “Unfortunately we couldn’t push enough to catch Vilarino. He was very quick and had the advantage of the pole position. I wasn’t involved too much in the fight between Stienes and Vilarino so I was able to save the tires a little bit, so we’ll see tomorrow. Understanding the new tires this year will be an important part of the championship, so I’m ready to strike back tomorrow.”

Lucas Lasserre (#33 Mishumotors Chevrolet Camaro) was fourth ahead of Nicolo Rocca (#24 PK Carsport Chevrolet Camaro) who won the Junior Trophy in his NWES comeback. The Italian edged Alex Sedgwick (#90 Braxx Racing Chevrolet Camaro) and Loris Hezemans (#50 Hendriks Motorsport Ford Mustang), who fought his way up from the 13th place on the grid. 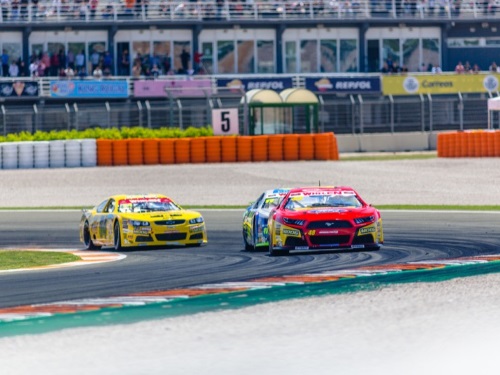 The NASCAR Whelen Euro Series ELITE 1 will be back at action on Sunday at the famous Circuit Ricardo Tormo. The race will start at 1:55 pm CEST. All races will be streamed live at Fanschoice.tv, the Euro NASCAR Youtube channel and Facebook page, Motorvision.tv and a vast of websites and social media pages around the world.