BAYTOWN, Texas (April 13, 2019) – For the first time in NHRA history, a father and daughter will start race day at the top of both nitro categories for the 32nd annual Mopar Express Lane NHRA SpringNationals presented by Pennzoil at Houston Raceway powered by Pennzoil. That duo is none other than 16-time Funny Car champion John Force and the 2017 Top Fuel champion, Brittany Force.

The J. Force and B. Force combo are the first father and child pair to ever qualify No. 1 together at an NHRA event. J. Force’s No. 1 earned him his 156th career top spot while B. Force picked up her 12th.

The duo has also never won on the same race day. For many years, John Force Racing was a Funny Car powerhouse but when B. Force made her NHRA professional debut in 2013, she chose to enter the Top Fuel rankings. Until 2019 when rookie Austin Prock joined JFR, B. Force was the sole Top Fuel pilot. She has shared a winner’s circle with her teammate Robert Hight but never her father.

“My dad and I haven’t done anything yet side-by-side but really, I’m looking for a win with him this season,” B. Force said. “It’s a father-daughter year so we’re looking to end up in that winner’s circle together.”

“This sport brings me together with my children,” J. Force said. “That’s what I love about NHRA drag racing. We’re one big family. But to have a moment with her, that her and I can share together, you really become a lot closer, believe it or not.

“They were all really close, the girls, with their mom. But as I raced, like I did with Ashley (Force-Hood), then with Courtney (Force) and now with Brittany, you get closer. So, something like this, it’ll give us a moment of just looking at each other and me being proud of her. I’ve earned a lot of these (No. 1 qualifier) hats, not so many lately but these guys, (crew chiefs, Brian) Corradi and (Danny) Hood, they’re really doing a good job. They give me a hot rod that runs like that. Tomorrow’s a whole new ball game. Tomorrow we have to get after this thing. So tonight we can share the moment and tomorrow we come out here to Houston to entertain the fans.”

J. Force secured the No. 1 qualifying position in his PEAK Coolant and Motor Oil / BlueDEF Chevy Camaro SS with his 3.888-second lap at 319.29 mph on Friday. B. Force earned her No. 1 spot on Friday as well when she set a new track record at Houston Raceway powered by Pennzoil with her time of 3.661 at 332.18 in her Advance Auto Parts dragster.

“We’re coming in strong this weekend,” B. Force stated. “We had a good weekend in Vegas. We’re coming in strong to Houston. We won this thing last year and the plan is to come out and win this thing tomorrow on race day. Setting both ends of the track record last night was awesome. A 3.66 on the board was a pretty incredible run by (crew chiefs) David Grubnic, Mac Savage and the Advance Auto Parts team. We’re looking for a long day tomorrow and tomorrow is when it really begins.”

In the E3 Spark Plugs Pro Mod Drag Racing Series Presented by J&A Service division, Jose Gonzalez picked up the No. 1 qualifier with a lap of 5.731 at 257.43. The Pro Mod class is running the second race of its 12 race circuit.

Eliminations will begin at Houston Raceway powered by Pennzoil on Sunday at 11:00 a.m. CT. 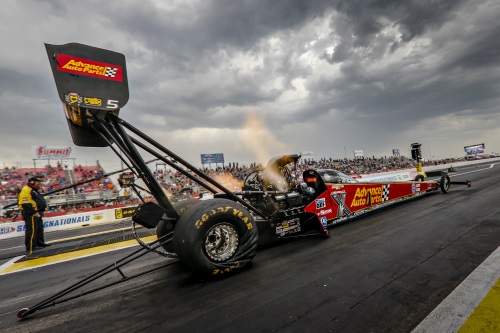 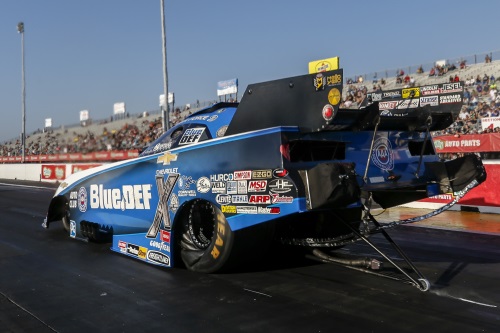