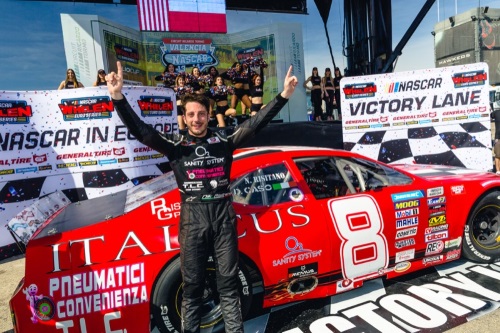 Nicholas Risitano (#8 Racers Motorsport Chevrolet Camaro) took his maiden NASCAR Whelen Euro Series win at end of a vibrant ELITE 2 Round 2, holding off a very strong Andre Castro (#24 PK Carsport Chevrolet Camaro) after a late restart. The Italian was impeccable in fending off every attack grabbed his first ever win in the NASCAR Whelen Euro series.

Risitano carved his way to the top after starting fifth in the second ELITE 2 race of the 2019 season. The 31-year-old Italian took advantage of the intense battle for the lead ahead of him between Myatt Snider (#48 Racing Engineering Ford Mustang) and Castro to position himself perfectly and grabbed the lead on lap 8 of the 15-lap race, keeping it until the checkered flag.

“It was an amazing race and I’m happy to celebrate my my first ever NWES win here at Valencia,” said Risitano. “Yesterday we broke an engine but the team was able to send me on track for two laps in the first race to get a good position for today’s race. Racers Motorsport simply did a fantastic job, they worked all day and night to win this race. I’m really looking forward to the races at Italy in May.” 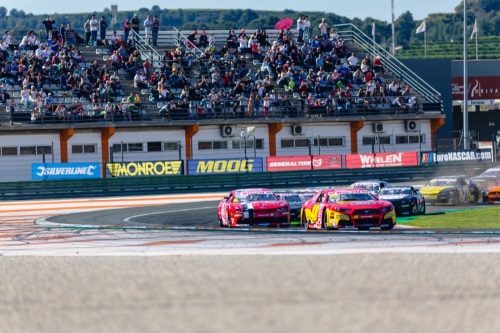 “We really wanted to finish one place better but second place is a really good result for the championship,” said Castro. “I set my goal to be in the top-5, everything extra is a win. After yesterday the goal was a little bit higher but we really can’t be upset with this. I think we will have a good chance at Franciacorta in Italy.”

“It was an awesome weekend for us,” said Ghirelli. “It was a tough race, but I was always there. I saved the tires a little bit so I was able to overtake even on the outside. It’s nice to be on the podium. Overall it was a great weekend for us and I hope to achieve even better results in in my home race next time out.”

The ELITE 2 Division will return to action in four week’s time at the Autodromo di Franciacorta in Italy, on May 11-12. All races will be streamed live at Fanschoice.tv, the Euro NASCAR Youtube channel and Facebook page, Motorsport.tv and a vast of websites and social media pages around the world. 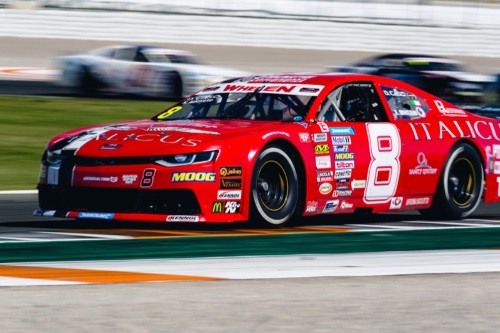