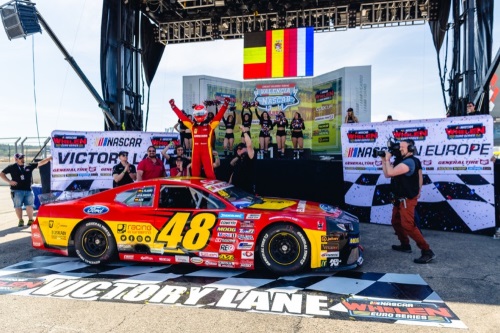 It was a perfect Euro NASCAR comeback for Ander Vilarino (#48 Racing Engineering Ford Mustang) in the NWES season opener at Valencia. After winning on Saturday, the Spaniard went back-to-back in an exciting ELITE 1 Round 2, leading all the 18 laps of the race. He outpaced an impressive Stienes Longin (#24 PK Carsport Chevrolet Camaro), who was second in both races at the Circuit Ricardo Tormo. The two are now first and second in the championship standings, separated by 10 points.

Vilarino held off the Belgian all race long in a flat-out race for the win. Today’s win was the 22nd in his NASCAR Whelen Euro Series career and the sixth at Valencia, strengthening his position as the most successful driver in Euro NASCAR history.

“We just had a fantastic car, I have to congratulate Racing Engineering for this,” said the winningest driver in Euro NASCAR. “It was the team’s first race ever in this series and they did a great job. I was not expecting to win a single race here in front of my home crowd, but honestly the car was perfect. Thanks to the fans, Euro NASCAR and all the persons involved for making it such a great weekend.”

“It was a really great weekend for us,” said Longin, who will chase Vilarino for the championship lead at the Autodromo di Franciacorta in Italy next month. “The team was outstanding in building the car and finding such a good setup. I think I had a shot to win the second race here. In the end it’s good to score a lot of points at the first weekend of the season. I tried to push a little bit harder to get Ander, but he was just a little bit quicker.”

“I’m happy that we came back to third after such a difficult qualifying,” said Hezemans, who scored the seventh podium in his Euro NASCAR career. “Today I made a good start from P5. I was able to gain a position right after the start. After that I had a good fight with Alon. I’m happy I was able to pass him and to get that third spot.”

The start of the race saw a big crash on the mainstraight. Ellen Lohr (#99 Dexwet-Df1 Racing Chevrolet Camaro) and Maurio Trione (#31 CAAL Racing Chevrolet SS) made contact and slammed hard into the wall. Both drivers walked away and had a friendly chat right after the checkered flag waved. It was a difficult race for former Formula One Champion Jacques Villeneuve (#32 Go Fas Racing), who was forced to retire while running in the top-10.

The ELITE 1 will be back in action on 11-12 May at the Autodromo di Franciacorta in Italy. All races will be streamed live at Fanschoice.tv, Euro NASCAR Youtube channel and Facebook page, Motorsport.tv and a vast of websites and social media pages around the world. 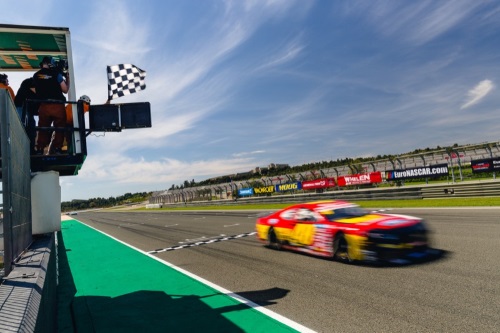 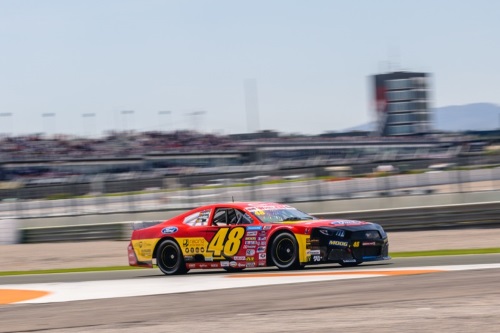