SONOMA, Calif. (July 27, 2019) – Two-time Funny Car world champion Robert Hight powered his Automobile Club of Southern California Chevrolet Camaro SS to the No. 1 spot Friday night under the lights at the NHRA Sonoma Nationals at Sonoma Raceway. Teammate and John Force Racing owner, John Force and the PEAK machine sit in the No. 8 spot, and in Top Fuel, first-year driver Austin Prock is in sixth with his Montana Brand / Rocky Mountain Twist dragster, and Brittany Force and Carquest Brakes are currently in the No. 10 position.

Looking for a repeat win at Sonoma Raceway, Robert Hight and the Auto Club Chevy Camaro team closed out the first qualifying session with a 3.986-second pass at 324.36 mph to be the fastest of the group. Coming into the night session sitting in the No. 6 spot, Hight handled his hot rod to a stout 3.858-second pass at 334.65 mph that earned him three bonus points and the top spot in the Funny Car class.

“You know you’re always in for a treat when you come to Sonoma with the Friday night run. It’s going to be a throw down, great atmospheric conditions with a great race track. That’s why it holds the speed record with the fastest run in history. You just have to hit it right and Jimmy and Chris did a great job. This will be our eighth No. 1 qualifier of the year,” said Hight. “We like these good conditions but it’s still summer time and we’re going to be racing in pretty hot conditions tomorrow and Sunday. We’ll celebrate a little bit tonight but change our whole outlook and program for the next two days.”

Rookie of the Year candidate, Austin Prock made his first pass down Sonoma Raceway at 3.931-seconds and 292.14 mph in his Montana Brand / Rocky Mountain Twist dragster to sit in the current No. 9 spot. Prock improved in the night session running his dragster to a solid 3.737-second pass at 327.90 mph to move up three spots into the No. 6 position.

“It was a solid day of qualifying for this Montana Brand / Rocky Mountain Twist team. First run we had really good early numbers and it dropped a cylinder and ended up hurting the engine,” said Prock. “Second run, we made a stout pass but had a little driver error on the starting line. I rolled in a few hundredths deep and stole some ET away, just a stupid mistake by a rookie. All in all, a good pass and a good day for us.”

John Force ran a 3.974-second pass at 319.98 mph in his PEAK Coolant and Motor Oil Chevy Camaro SS to end the first qualifying session sitting in the No. 3 spot. With header flames lit, Force powered his hot rod to 3.952-seconds at 325.22 mph in the second session but would be pushed into the No. 8 spot to start Saturday’s qualifying.

“We’re in Sonoma, conditions here are at sea level and its always a good race track. Robert Hight, with Auto Club, kind of shocked everybody but then they followed him running well. I ended up eighth, I had problems but right now, Brittany and Carquest are in, Austin and Montana Brand are in,” said Force who picked up a bonus point in the first session. “We’re going to try and win this thing. Something about the energy coming out her in Sonoma. I’ve been coming here since the 80s and I do love the people and a lot of fans here. I want to represent all of my sponsors. PEAK, Advance, Auto Club, Montana Brand / Rocky Mountain Twist and Chevy, but Pit Boss, Parker Store, Weld and all of them. I want to go out and win this thing for all of them, PPG, Baldwin, Gates.”

In her first qualifying pass of the weekend, Brittany Force launched her Carquest Brakes dragster to a stellar 3.785-second pass at 325.61 mph. During the second session, the 2017 Top Fuel world champion had trouble when she started to lose traction and had to shut off her 11,000-horsepower machine to run 7.440-seconds at 85.54 mph. Force will start Saturday’s qualifying sessions in the No. 10 spot.

“We had a good run Q1, ran a .78, put us at No. 3. That last run we were just trying to take advantage of a cool track and really push the car but it didn’t get down there, shook the tires,” said Force. “Today wasn’t what we were looking for but we have all day tomorrow, two more runs and conditions that will be similar to race day. We’ll get some data and get ourselves set up to go some rounds on race day.”

Qualifying at the NHRA Sonoma Nationals continues on Saturday with two additional sessions at 2 p.m. and 5 p.m. at Sonoma Raceway. Television coverage of the second day of qualifying will air Sunday at 2:30 p.m. ET on FOX Sports 1 (FS1). Eliminations at the 15th event on the NHRA Mello Drag Racing Series schedule are slated for 11 a.m. with live finals coverage beginning at 5 p.m. ET on FOX Broadcasting Network. 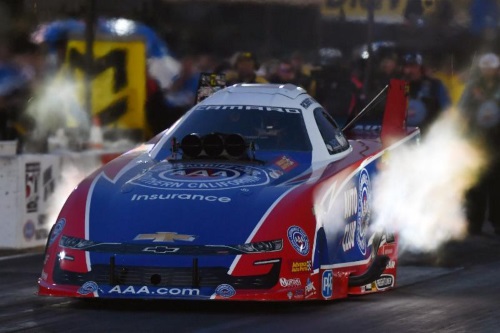 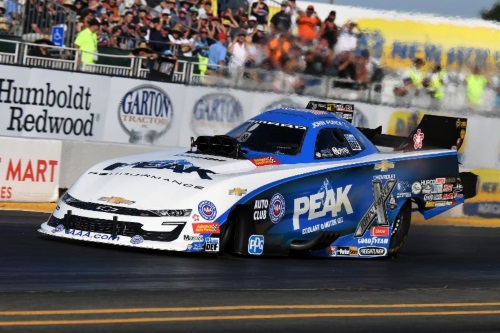 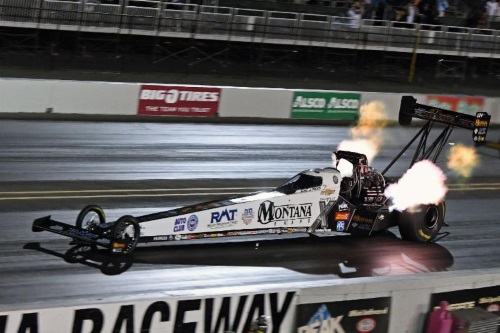 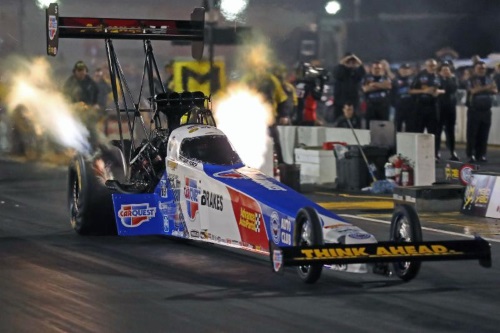