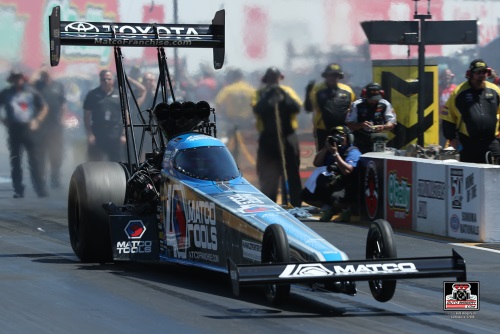 Race Recap:
Antron Brown made history on Sunday at the NHRA Sonoma Nationals when he became the sixth driver to capture 500 Top Fuel round wins. The No. 4 qualifier began race day with 499 Top Fuel round wins under his belt, and after defeating Cameron Ferre in the first round of eliminations, he joined Tony Schumacher, Larry Dixon, Doug Kalitta, Joe Amato and Corey McClenathan on the elite list of decorated drivers who have reached that milestone.

Brown’s round one win set up a quarterfinal matchup with Kalitta, a fellow ‘500 club’ member. The four-time event champ had a slight starting line advantage over Kalitta. The veteran drivers quickly lost traction at nearly the same spot on the track and both were quick to get back on the throttle. Brown was able to get his Matco Tools machine down to the stripe first and take the win. In the semis, Brown faced Clay Millican and despite a sizeable advantage at the tree, a dropped cylinder caused him to slow and enabled Millican to drive away with the win.

Quotable:
“We felt really good. Our car made a good move off the starting line, we had a good 60-foot, we’ve just been having issues mowing through the clutch, and it caused us to drop a hole which slowed us down. We had a good advantage on him, but at the end of the day, it’s racing, we still have some work to do to get to where we want to be, but the main thing is, we went to the semifinals, so we have to take the positive with it. We’ve got to work on getting our clutch application under control, and once we do that, I think we’ll be able to run with any car out there.”

On earning his 500th round win:
“It’s pretty cool to have your name in the company of the drivers that have accomplished that – with Tony Schumacher, Larry Dixon, Joe Amato, Doug Kalitta and Cory Mac. It doesn’t get any better than that. Just to be up there with all the people that I’ve looked up to and raced against. It feels good to be a part of that crew. But my career’s not over by a long shot. I still have a lot of fight in me.” 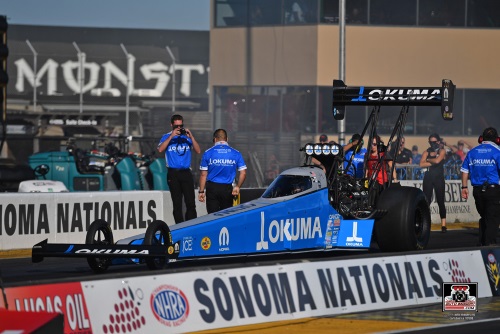 Race Recap:
After making two solid qualifying passes in the heat of the day on Saturday, Leah Pritchett and her Okuma Top Fuel Dragster team looked prime for a long day of going rounds on Sunday. Pritchett and her opponent, Austin Prock, kicked off race day with an exciting side-by-side race. The Sonoma E.T. track record holder rocketed the Okuma machine to its best run of the weekend (3.774 E.T.) but came up about a half-a-car-length short against Prock who posted a 3.744.

Quotable:
“It was definitely the bad end of a great drag race today. It was a great show for the fans to watch, but man, we would’ve beat over three-quarters of our field. We were the first pair out and had a fantastic race car. We made a great run, just got outran. We seem to have an excessive amount of clutch wear that peeps it’s head out on race day, just enough to affect our E.T. We didn’t go out there trying to run a 3.77, we were trying to run a 73 or so. Each time we think we have it figured out, it rears its head, so we’ll be making some major wholesale clutch changes going into Seattle. Not sure what’s more difficult, getting a little bit of good luck on our side or toning down our clutch wear, but I believe we’ll find both in Seattle.” 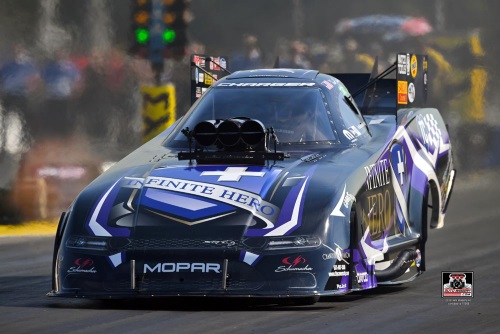 Race Recap:
“Fast Jack” Beckman has been exceptionally close to earning his first Wally of 2019, and the 2015 Sonoma Nationals winner was hoping to put it all together this weekend. He qualified third after making four consistent runs and looked poised to breakthrough in the second leg of the Western Swing. Beckman, who was honored with the Eric Medlen Award on Thursday evening, motored his Infinite Hero Foundation Dodge Charger SRT Hellcat to an opening-round victory over Jeff Diehl with a pass of 3.996 seconds at 320.74 mph in his 700th career round of competition. The win earned Beckman a rematch with teammate and fellow Hellcat Funny Car racer Matt Hagan, who he defeated last weekend in the first round of the Dodge Mile-High Nationals. Beckman and Hagan powered to the two quickest runs of the session, but Hagan was able to edge past for the win.

Quotable:
“I think it’s probably a measure of respect for our team that our opponents run low E.T. against us so often, but that just tells us we are going to have to push harder relative to the racetrack. Dickie (Venables) and his team just opened a can of you-know-what on us in that run. I don’t know that any crew chief saw that coming. We have a great Dodge Charger SRT Hellcat right now. We made it down the racetrack six times in a row. This team is ready to celebrate on Sunday, and we’re going to go win in Seattle.” 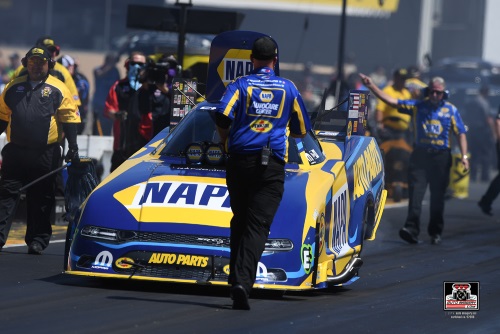 Behind the wheel of the NAPA AUTO PARTS Dodge Charger SRT Hellcat Funny Car, Capps powered to two stout runs in the heat of the day on Saturday and looked to have a good baseline heading into race day.

Starting from the No. 9 spot, Capps faced No. 8 qualifier Blake Alexander in round one. Alexander was out of the gate first, but Capps quickly pulled ahead and held the lead through the 330-foot mark before his car started to haze the tires, allowing his opponent to drive around and take the win.

Quotable:
“We had a great race car in the heat yesterday and really felt comfortable. Not making it down during that Friday night run really hurt us in position, but still, you’ve heard me say a million times about the NAPA Know How and Rahn Tobler being able to go down the track no matter the conditions.

“I felt confident going into race day, but you have to remember that Blake is young and hungry. He won this race in Top Fuel last year, and he drives a Tim Wilkerson team car. It can be a lethal car, and we didn’t take them lightly. We were pushing to run a mid-to-high 3.90, and it just didn’t hold. It’s very rare to see the NAPA car smoke the tires at that point on race day. We’ll service and pack it up and head to Seattle and get back to it on Friday.” 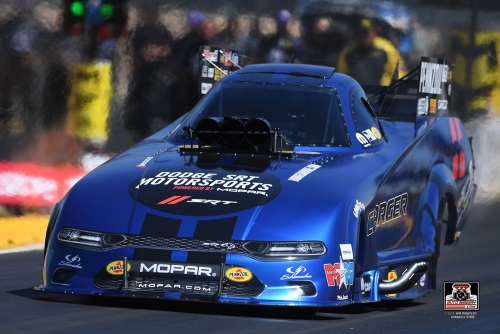 Race Recap:
Matt Hagan gave it a good run for his first Sonoma Raceway Wally trophy but came up just short of ending his day in the winner’s circle when he fell to Robert Hight in the final round. The driver of the MOPAR-powered Dodge Charger SRT Hellcat Widebody Funny Car’s run to the final began with a round-one meeting with reigning world champion J.R. Todd. Hagan had the holeshot advantage over Todd in what was billed as NHRA’s Funny Car ‘marquee matchup,’ and navigated his machine down the track in 3.958 seconds easily defeating Todd’s tire-smoking effort. Round two pitted Hagan against fellow teammate Jack Beckman. Hagan was looking to exact revenge over his fellow Hellcat driver who defeated him in the first round at the previous event. The pair rocketed their MOPAR-powered Dodges to the two quickest runs of the round, and Hagan’s 3.924 E.T. knocked out Beckman’s solid 3.995-second pass.

The two-time world champion secured the automatic round win in the semifinals when his opponent, John Force, was unable to get his car out of reverse. Hagan’s Dickie Venables-tuned 3.962-second run gave him the advantage of lane choice versus current Funny Car point leader Robert Hight in the finals. In his 58th final round, Hagan posted a 4.030, but it wasn’t enough to defeat Hight’s 3.973.

Quotable:
“This was a really good weekend for us. The Dodge Charger SRT Hellcat Widebody was really good. We put down some really impressive numbers on our way to the finals. It was important for us to win some rounds and improve ourselves in the standings with Indy coming up quickly. We gained a lot of confidence today, and that’s huge at this point in the year. In the final, we just didn’t have the speed we needed to get that win, but we are right there. I think we have a really strong car right now. It’s driving well and responding to what we want it to do. Our goal now is just to continue being consistent, and hopefully, we’ll pull down a win next weekend in Seattle.” 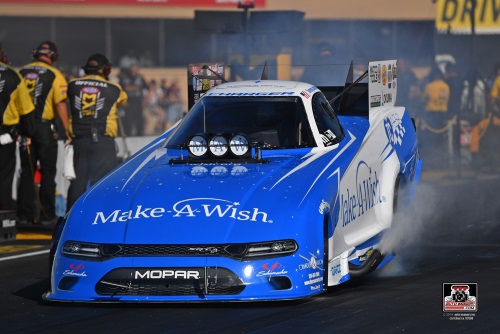 Race Recap:
Last weekend’s winner Tommy Johnson Jr. is in the midst of a career-best season behind the wheel of the Make-A-Wish Dodge Charger SRT Hellcat and in Sonoma, he was chasing his third triumph of 2019. After qualifying fifth with Friday night’s run of 3.886 seconds, he faced Cruz Pedregon in the opening round. Pedregon left early and set off the red light, handing Johnson the victory and setting up a rematch of last week’s final with Bob Tasca III in round two. Just like last weekend in Denver, Johnson again turned on the win light with a smooth run of 4.031 seconds at 318.47 mph to advance to his ninth semifinal of the season. Johnson’s consecutive round win run was halted at six when he couldn’t drive around Robert Hight, but he heads to Seattle with momentum and sitting solidly in second in the championship standings.

Quotable:
“I’m just extremely pleased with the way this Dodge Hellcat is performing. Today’s result wasn’t a win like last weekend, but that was a solid semifinal drag race with Robert Hight. We are ranked one and two in the points, and we put on a great show for the fans here today. It was a really close race, and things are going to get interesting. We are getting closer to the Countdown, and this car is performing flawlessly. We just need a little bit more. The next couple of races leading up to Indy, hopefully, we can get just a tick better. I think we are setting ourselves up for a really strong finish to this season.”